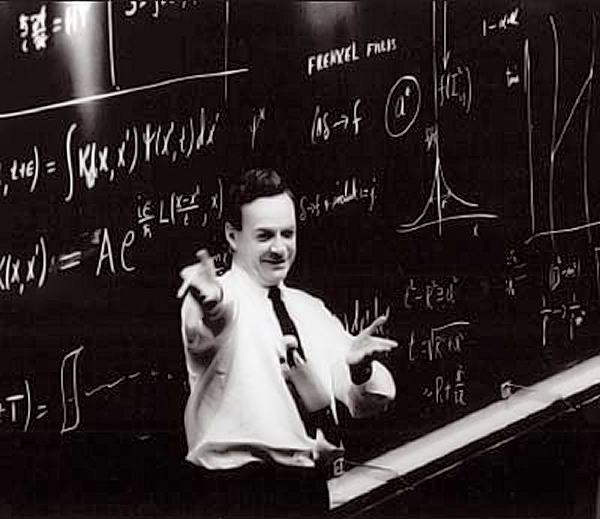 The dream of every theoretical physicist, perhaps the most ancient dream of every scientist, is to reduce the Universe ( or the Polyverse if you believe we live in a Polyverse, also called Multiverse by some quantum theorists) to a single set of principles and/or equations. Principles should be intuitive and meaningful, while equations should be as simple as possible but no simpler to describe every possible phenomenon in the Universe/Polyverse.

What is the most fundamental equation?What is the equation of everything? Does it exist? Indeed, this question was already formulated by Feynman himself  in his wonderful Lectures on Physics! Long ago, Feynman gave us other example of his physical and intuitive mind facing the First Question in Physics (and no, the First Question is NOT “(…)Dr.Who?(…)” despite many Doctors have faced it in different moments of the Human History).

Today, we will travel through this old issue and the modest but yet intriguing and fascinating answer (perhaps too simple and general) that R.P. Feynman found.

Well, how is it?What is the equation of the Universe? Feynman idea is indeed very simple. A nullity condition! I call this action a Feynman nullity, or feynmanity ( a portmanteau), for brief. The Feynman equation for the Universe is a feynmanity:

Impressed?Indeed, it is very simple. What is the problem then?As Feynman himself said, the problem is really a question of “order” and a “relational” one. A question of what theoretical physicists call “unification”. No matter you can put equations together, when they are related, they “mix” somehow through the suitable mathematical structures.  Gluing “different” pieces and objects is not easy.  I mean, if you pick every equation together and recast them as feynmanities, you will realize that there is no relation a priori between them. However, it can not be so in a truly unified theory. Think about electromagnetism. In 3 dimensions, we have 4 laws written in vectorial form, plus the gauge condition and electric charge conservation through a current. However, in 4D you realize that they are indeed more simple. The 4D viewpoint helps to understand electric and magnetic fields as the the two sides of a same “coin” (the coin is a tensor). And thus, you can see the origin of the electric and magnetic fields through the Faraday-Maxwell tensor

. Therefore, a higher dimensional picture simplifies equations (something that it has been remarked by physicists like Michio Kaku or Edward Witten) and helps you to understand the electric and magnetic field origin from a second rank tensor on equal footing.

You can take every equation describing the Universe set it equal to zero. But of course, it does not explain the origin of the Universe (if any), the quantum gravity (yet to be discovered) or whatever. However, the remarkable fact is that every important equation can be recasted as a Feynmanity! Let me put some simple examples:

Example 1. The Euler equation in Mathematics. The most famous formula in complex analysis is a Feynmanity

if you prefer the constant

Example 2. The Riemann’s hypothesis. The most important unsolved problem in Mathematics(and number theory, Physics?) is the solution to the equation

is the celebrated Riemann zeta function in complex variable

. Trivial zeroes are placed in the real axis

. Riemann hypothesis is the statement that every non-trivial zero of the Riemann zeta function is placed parallel to the imaginary axis and they have all real part equal to 1/2. That is, Riemann hypothesis says that the feynmanity

I generally prefer to write the Riemann hypothesis in a more symmetrical and “projective” form. Non-trivial zeroes have the form

so that for me, non-trivial true zeroes are derived from projective-like operators

where the geometric product is defined as

Indeed, in the Lorentz gauge

, the Maxwell equations reduce to the spin one field equations:

Example 4. Yang-Mills equations. The non-abelian generalization of electromagnetism can be also described by 2 feynmanities:

The current equation for YM fields is

The Bianchi identities are

Example 5. Noether’s theorems for rigid and local symmetries. Emmy Noether proved that when a r-paramatric Lie group leaves the lagrangian quasiinvariant and the action invariant, a global conservation law (or first integral of motion) follows. It can be summarized as:

Moreover, she proved another theorem. The second Noether’s theorem applies to infinite-dimensional Lie groups. When the lagrangian is invariant (quasiinvariant is more precise) and the action is invariant under the infinite-dimensional Lie group parametrized by some set of arbitrary (gauge) functions ( gauge transformations), then some identities between the equations of motion follow. They are called Noether identities and take the form:

where the gauge transformations are defined locally as

certain differential operators depending on the fields and their derivatives up to certain order. Noether theorem’s are so general that can be easily generalized for groups more general than those of Lie type. For instance, Noether’s theorem for superymmetric theories (involving lie “supergroups”) and many other more general transformations can be easily built. That is one of the reasons theoretical physicists love Noether’s theorems. They are fully general.

Example 6. Euler-Lagrange equations for a variational principle in Dynamics take the form

, where L is the lagrangian (for a particle or system of particles and

. Even the classical (and quantum) theory of (super)string theory follows from a lagrangian (or more precisely, a lagrangian density). Classical actions for extended objects do exist, so it does their “lagrangians”. Quantum theory for p-branes

is not yet built but it surely exists, like M-theory, whatever it is.

. Every known fundamental force can be described through a variational principle.

, for certain hamiltonian operator H. Note that the feynmanity is itself

when we studied special relativity from the hamiltonian formalism. Even more, in Loop Quantum Gravity, one important unsolved problem is the solution to the general hamiltonian constraint for the gauge “Wilson-like” loop variables,

describing free spin 1/2 fields. It can be also easily generalized to interacting fields and even curved space-time backgrounds. Dirac equation admits a natural extension when the spinor is a neutral particle and it is its own antiparticle through the Majorana equation

and the general conventions for gamma matrices, it can be also alternatively writen as

More generally, every local (and non-local) field theory equation for spin s can be written as a feynmanity or even a theory which contains interacting fields of different spin( s=0,1/2,1,3/2,2,…).  Thus, field equations have a general structure of feynmanity(even with interactions and a potential energy U) and they are given by

, where I don’t write the indices explicitly). I will not discuss here about the quantum and classical consistency of higher spin field theories (like those existing in Vasiliev’s theory) but field equations for arbitrary spin fields can be built!

Example 12. SUSY charges. Supersymmetry charges can be considered as operators that satisfy the condicion

The Feynman’s conjecture that everything in a fundamental theory can be recasted as a feynmanity seems very general, perhaps even silly, but  it is quite accurate for the current state of Physics, and in spite of the fact that the list of equations can be seen unordered of unrelated, the simplicity of the general feynmanity (other of the relatively unknown neverending Feynman contributions to Physics)

is so great that it likely will remain forever in the future of Physics. Mathematics is so elegant and general that the Feynmanity will survive further advances unless  a  Feynman “inequality” (that we could call perhaps, unfeynmanity?) shows to be more important and fundamental than an identity. Of course, there are many important results in Physics, like the uncertainty principle or the second law of thermodynamics that are not feynmanities (since they are inequalities).

Do you know more examples of important feynmanities?

Do you know any other fundamental physical laws or principles that can not be expressed as feynmanities, and then, they are important unfeynmanities?