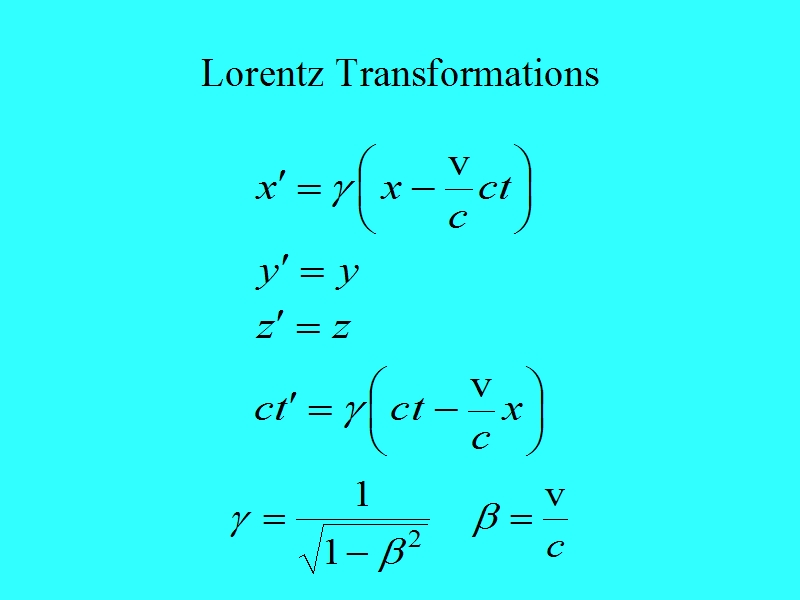 For physicists working with objects approaching the light speed, e.g., handling with electromagnetic waves, the use of special relativity is essential.

The special theory of relativity is based on two single postulates:

1st) Covariance or invariance of all the physical laws (Mechanics, Electromagnetism,…) for all the inertial observers ( i.e. those moving with constant velocity relative to each other).

It means that there is no preferent frame or observer, only “relative” motion is meaningful when speaking of motion with respect to certain observer or frame. Indeed, unfortunately, it generated a misnomer and a misconception in “popular” Physics when talking about relativity (“Everything is relative”). What is relative then? The relative motion between inertial observers and its description using certain “coordinates” or “reference frames”. However, the true “relativity” theory introduces just about the opposite view. Physical laws and principles are “invariant” and “universal” (not relative!).  Einstein himself was aware of this, in spite he contributed to the initial spreading of the name “special relativity”, understood as a more general galilean invariance that contains itself the electromagnetic phenomena derived from Maxwell’s equations.

No matter how much you can run, speed of light is universal and invariant. Massive particles can never move at speed of light. Two beams of light approaching to each other does not exceed the speed of light either. Then, the usual rule for the addition of velocities is not exact. Special relativity provides the new rule for adding velocities.

In this post, the first of a whole thread devoted to special relativity, I will review one of the easiest ways to derive the Lorentz transformations. There are many ways to “guess” them, but I think it is very important to keep the mathematics as simple as possible. And here simple means basic (undergraduate) Algebra and some basic Physics concepts from electromagnetism, galilean physics and the use of reference frames. Also, we will limite here to 1D motion in the x-direction.

Let me begin! We assume we have two different observers and frames, denoted by S and S’. The observer in S is at rest while the observer in S’ is moving at speed

with respect to S. Classical Physics laws are invariant under the galilean group of transformations:

for the inverse transformation. There

is a function of the speed of light (denoted as c, and constant in every frame!) and the relative velocity

of the moving object in S’ with respect to S. The small velocity limit of special relativity to galilean relativity imposes the condition:

By the other hand, according to special relativity second postulate, light speed is constant in every reference frame. Therefore, the distance a light beam ( or wave packet) travels in every frame is:

in S, or equivalently

in S’, or equivalently

Then, the squared spacial  separation between the moving light-like object at S’ with respect to S will be

The only “weird” term in the above last two equations are the mixed term with “xvt” (or the x’vt’ term). So, we have to make some tricky algebraic thing to change it. Fortunately for us, we do know that

In the same way,  we proceed with the inverse transformations:

We got it! We can know susbtitute the mixed x-v-t and x’-v-t’ triple terms in terms of the last expressions. In this way, we get the following equations:

And now, the final stage! We substract the first equation to the second one in the above last equations:

But we know that

or, more commonly we write:

Moreover, we usually define the beta (or boost) parameter to be

To obtain the time transformation we only remember that

for light signals, so then, for time we  obtain:

Finally, we put everything together to define the Lorentz transformations and their inverse for 1D motion along the x-axis:

and for the inverse transformations

ADDENDUM: THE EASIEST, FASTEST AND SIMPLEST DEDUCTION  of

If you don’t like those long calculations, there is a trick to simplify the “derivation” above.  The principle of Galilean relativity enlarged for electromagnetic phenomena implies the structure:

Now, the second postulate of special relativity says that light signals travel in such a way light speed in vacuum is constant, so

. Inserting these times in the last two equations:

Multiplying these two equations, we get:

If we consider any event beyond the initial tic-tac, i.e., if we suppose

will be different from zero, and we can cancel the factors on both sides to get what we know and expect: