Suppose two events happening in the S’-frame at the same point at different times.

. What is the temporal separation in the S-frame? According to Lorentz transformations, it is:

Of course, in the parallel case, if two events are happening in the S-frame at the same point but different times, i.e., if

, their temporal separation in the S’-frame will be, using the inverse Lorentz transformations will be:

The boxed equations are called the TIME DILATION.

We can use an alternative procedure to derive this deep result in relativity (a result with important phenomenology!). We can use a LIGHT CLOCK device. In the S’-frame, we send light rays to a mirror as a “clock”. In the S-frame, in motion relative to S’ with velocity parallel to it we have the following scheme for the “light-clock”: 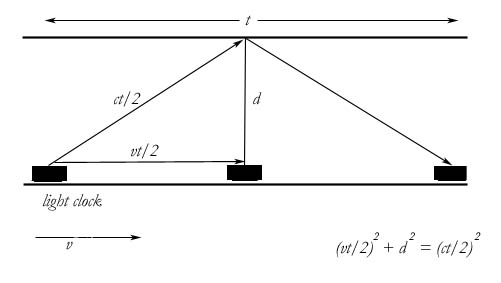 Thus, we have the above Pytaghorean relationship. The tic-tac in the S-frame is

. Moreover, accordingly to the S’-frame, a light flash will travel a distance 2d (forward and back, reflected on a mirror). Therefore:

Therefore, by the Pythagorean theorem in the triangle with the sides given in the above picture, we have

i.e., since we can choose initial tic-tacs in S and S’ equal to zero, we obtain

, and we also get

Indeed, of the whole set of inertial observers, an observer at rest relative to a process measures the shortest possible time for that process. It is called the PROPER TIME, and it is generally denoted by the greek letter

CAUTION: It seems that the above two formula for the time dilation are contradictory, but it is wrong. They are OK. We must keep in mind that the time variables on the right-hand side of those equations mean “proper time” of a concrete process, i.e., it stands for the time that an observer measures being at rest relative to that process. The left-hand side of both equations denotes the time an observer measures being “in motion” relative to that process. When S and S’ are in motion, there can only be ONE frame where the process is taken as “being in rest”. We have to select one of the equations, we can NOT choose both!