Once we introduce the postulates of special relativity and we have deduced the generalization of galilean transformations for electromagnetism and mechanics, the Lorentz transformation. We can deduce some interesting results.

Suppose we have two events

, whose coordinates of space and time are given generally by

. We also suppose, for simplicity, that the relative motion is along the x-axis. Imagine a rod, whose ”rest” length is

It is evident from the structure of Lorentz transformations that time depends on the observer frame (S or S’) and we have to fix the notion of “simultaneity” to measure the rod length in a meaningful way. Therefore, we can set

to “syncronize” our stick measurements in “motion”, i.e., we have to measure the position of the rod in the same time in order to determine its length at motion!

Therefore, substracting both equations, we get, using the temporal condition (simultaneity) as well:

This result is known in Special Relativity (SR) as length contraction. Bodies in motion have “dimensions” that are shorter than those “in rest”. Of course, according to the postulates of relativity, it is relative. From the S’ frame, objects that were “in rest” in S appear to be shorter as well. In that case, from the viewpoint of S’

for our “stick”. In this case we get:

so, according to S’, the length of the rod in the S frame is

There is an alternative proof of this result using what Einstein himself called LIGHT CLOCK. The light clock is a nice Gendankenexperiment using frames and light signals between the S and S’ frames. S is at rest relative to S’. S’ is in motion relative to S. At t’=t=0 a light signal ( a “flash”) is emitted in S’, where there is an object with lenght equal to l’ (since we are in the S’ frame). 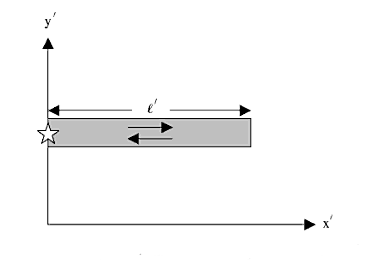 By the other hand, in the S frame we have the following events: 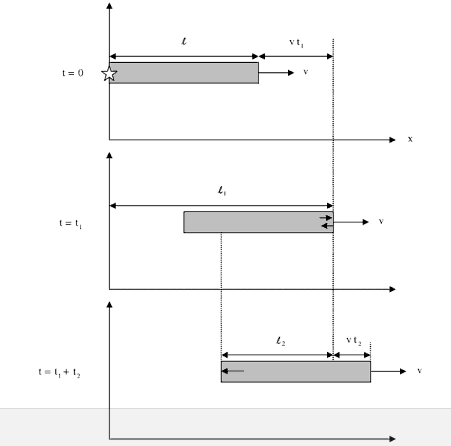 Now we will see the physical picture behind the two frames.

A) S’ frame. The light flash travel till the end ob the object, where is put a mirror and it comes back. The path traveled by the light is equal to 2l’ during a time t’, and thus, the length observed by the S’ frame is equal to:

B) S frame. The light flash from t=0, but the object is in motion too, so it travels an additional quantity

until the ray is reflected, and another extra quantity

till it arrives to our origin when we measure the light time of arrival. There are two differents contributions to the total length l:

The total running time of the light path in the S-frame will be:

Therefore, the light clock in the S-frame measures

Dividing the results from A) and B), we get

But as we know that the time contraction implies

so we get at last

The main conclusion is the following:

This phenomenon is known as LENGTH CONTRACTION in special relativity.

Of the whole set of inertial observers moving along a certain direction, an observer at rest relative to an object extended in that direction measures the greatest length for that object. This length is commonly called PROPER LENGTH of the object. Lengths in TRANSVERSE( or orthogonal) directions of motion are not subject to length contractions.