Warning: Declaration of AMW_Related_Sub_Items_Walker::walk($elements, $max_depth) should be compatible with Walker::walk($elements, $max_depth, ...$args) in /web/htdocs/www.thespectrumofriemannium.com/home/wordpress/wp-content/plugins/advanced-menu-widget/class-advanced-menu-walker.php on line 332 LOG#012. Michelson-Morley. | The Spectrum Of Riemannium ↓
Skip to primary content
Skip to secondary content
Home→Physmatics→LOG#012. Michelson-Morley.

Imagine a boat sailing in this river. The river flows from the left side to the right side at constant velocity

relative to the banks. Now, the trick of this analogy. Imagine that the boat is light, i.e., the boat are our loved electromagnetic waves ( whatever they are, and it implies they propagate in some kind of elastic medium like the water in the river; this medium was called ether by the physicists during the 19th century). When the boat ( remember it is an electromagnetic field hidden in the analogue model) is sailing downstream (or upstream), its velocity with respect to the banks will be

upstream. If you have to cover a distace

from the points A to B and back to A, it will spend a time that can be easily computed:

By the other hand, if the boat travels at right angles to the river ( remember it is playing the role of the ether), we can also calculate the time required by the boat to travel the distance

from C to D and come back to C. The velocity in this case is calculated using the Pythagorean theorem (or doing the calculus by components) and it is equal to

. In this way, the time will be then:

The time difference between these two times is calculated as well in a straightforward way:

or equivalently, the fundamental formula for the Michelson-Morley light-dragging through the ether reads:

of light in the ether. From the hypherphysics project page,  hyperphysics.phy-astr.gsu.edu/hbase/hframe.html, we get this nice illustration of their device:

How is this related to the previous calculation? Well, it is pretty nice and simple. Michelson and Morley built what is called an stellar interferometer for light. Suppose that we write

in out main boxed equation above. L is the arm lenght of our stellar interferometer. Similar changes can be done in the formulae for

in the picture above) and

in the picture). In that case the time difference will be:

This mathematical expression is complicated. But if we suppose that the drag velocity is small compared with the speed of light, we can make an approximation ( the technical “magic words” would be Taylor series):

As it is show in the figure as well, for a typical low drag velocity, the interferometer ( thanks to the wave character of light) could indeed measure tiny time separations searching for “moved fringes”. The fringe “shift” due to the rotation of the arms of the interferometer can be easily calculated. After a 90º rotation, the time diference

flips its sign, so the light should get a phase difference

. We know that the period of light is given by the relationship

. Then, the fringe shift pattern that Michelson and Morley expected to obtain was:

When Michelson did his first experiment in 1881, he had got

, and thus the expected fringe shift provided the minimum

. The shift was not observed, and performing some improvements, Michelson and his collaborator Morley, in 1887, got

and achieved a better ressolution in the fringe shift pattern. But, surprinsingly, there was no fringe shift in both cases!

In 1892, George Fitzgerald and H. Lorentz proposed (before A. Einstein true explanation with his relativity) that objects in the aether were contracted in the same fashion  (with the same formula) than we saw in relativity. In their conception, they indeed derived the Lorentz (or Lorentz-Fitzgerald) transformations but they intepreted (wrongly) in the context ot the electromagnetic ether theory. In this way, bodies were contrated in their motion through the aether and it could explain the null result of the Michelson-Morley experiment and other similar experiments. It changed radically when Einstein published his articles on relativity with the correct physical insight and consequences of their transformations, that Einstein himself derived from two simple principles, and more remarkably, neglecting the own existence of the ether!

The Michelson-Morley is likely one of the null experiments most famous in the history of Physics. Indeed, it advanced the rising of the special theory of relativity and, in perspective, it was saying that the ether hypothesis was not necessary for the electromagnetic field and its waves to exist and propagate “in vacuum”.

Of course, from the modern viewpoint, relativity moved the question of the ether into another…Nobody questions today how can light travel at speed of light in vaccum always at the same speed, independly from the source. Nobody questions that light can self-sustain their own oscillations in vacuum in space and time everywhere in the known Universe. Simply, we do know that it can and it does…Light and vacuum are entangled somehow. Indeed, the questions about the nature and properties of the ether has shifted now into the question what the vacuum is...That is, now we ask about what are the properties and nature of the vacuum and its properties. But that is another story that advanced the rising of the theory and methods of Quantum Physics and Quantum Field Theory. Too far for this modest post today!

Finally, I would like to remark that similar experiments to the Michelson-Morley experiment have been performed. Modern experiments are based on the concept of optical resonators and they have a set-up like this: 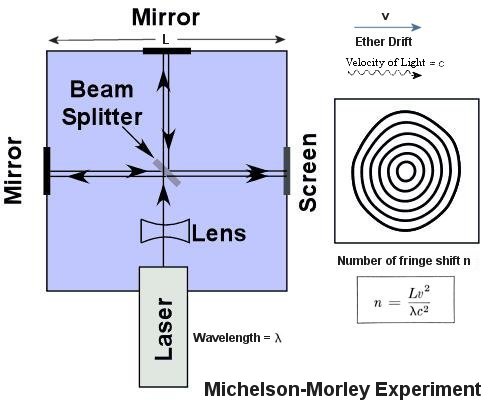 Every result of Michelson-Morley type experiments has been null. The ether as the 19th century physicists imagined does not exist.