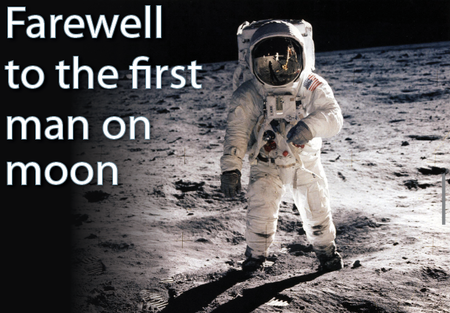 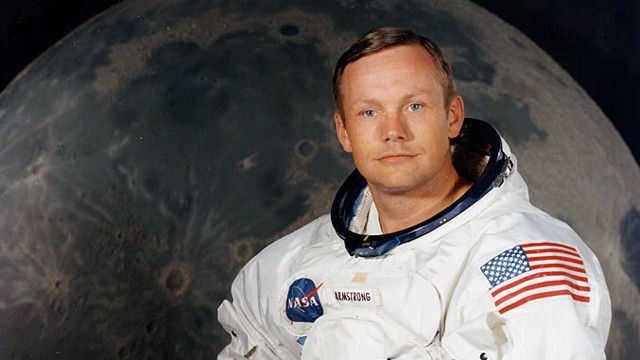 Hi, everyone! This is the first article in a thread of 3 discussing accelerations in the background of special relativity (SR). They are dedicated to Neil Armstrong, first man on the Moon! Indeed,  accelerated motion in relativity has some interesting and sometimes counterintuitive results, in particular those concerning the interstellar journeys whenever their velocities are close to the speed of light(i.e. they “are approaching” c).

Special relativity is a theory considering the equivalence of every  inertial frame ( reference frames moving with constant relative velocity are said to be inertial frames) , as it should be clear from now, after my relativistic posts! So, in principle, there is nothing said about relativity of accelerations, since accelerations are not relative in special relativity ( they are not relative even in newtonian physics/galilean relativity). However, this fact does not mean that we can not study accelerated motion in SR. The own kinematical framework of SR allows us to solve that problem. Therefore, we are going to study uniform (a.k.a. constant) accelerating particles in SR in this post!

First question: What does “constant acceleration” mean in SR?   A constant acceleration in the S-frame would give to any particle/object a superluminal speed after a finite time in non-relativistic physics! So, of course, it can not be the case in SR. And it is not, since we studied how accelerations transform according to SR! They transform in a non trivial way! Moreover, a force growing beyond the limits would be required for a “massive” particle ( rest mass

). Suppose this massive particle (e.g. a rocket, an astronaut, a vehicle,…) is at rest in the initial time

, and it accelerates in the x-direction (to be simple with the analysis and the equations!). In addition, suppose there is an observer left behind on Earth(S-frame), so Earth is at rest with respect to the moving particle (S’-frame). The main answer of SR to our first question is that we can only have a constant acceleration in the so-called instantaneous rest frame of the particle.  We will call that acceleration “proper acceleration”, and we will denote it by the letter

. In fact, in many practical problems, specially those studying rocket-ships, the acceleration is generally given the same magnitude as the gravitational acceleration on Earth (

Second question: What are the observed acceleration in the different frames? If the instantaneous rest frame S’ is an inertial reference frame in some tiny time

, at the initial moment, it has the same velocity as the particle (rocket,…) in the S-frame, but it is not accelerated, so the velocity in the S’-frame vanishes at that time:

Since the acceleration of the particle is, in the S’-frame, the proper acceleration, we get:

Using the transformation rules for accelerations in SR we have studied, we get that the instantaneous acceleration in the S-frame is given by

Since the relative velocity between S and S’ is always the same to the moving particle velocity in the S-frame, the following equation holds

We do know that

Due to time dilation

so in the S-frame, the particle moves with the velocity

We can now integrate this equation

The final result is:

We can check some limit cases from this relativistic result for uniformly accelerated motion in SR.

. This is the celebrated nonrelativistic result, with initial speed equal to zero (we required that hypothesis in our discussion above).

. In this case, the number one inside the root is very tiny compared with the term depending on acceleration, so it can be neglected to get

. So, we see that you can not get a velocity higher than the speed of light with the SR framework at constant acceleration!

Furthermore, we can use the definition of relativistic velocity in order to integrate the associated differential equation, and to obtain the travelled distance as a function of

We can perform the integral with the aid of the following known result ( see,e.g., a mathematical table or use a symbolic calculator or calculate the integral by yourself):

From this result, and the previous equation, we get the so-called relativistic path-time law for uniformly accelerated motion in SR:

For consistency, we observe that in the limit of short times, the terms in the big brackets approach

, in order to get

, so we obtain the nonrelativistic path-time relationship

. In the limit of long times, the terms inside the brackets can be approximated to

, and then, the final result becomes

. Note that the velocity is not equal to the speed of light, this result is a good approximation whenever the time is “big enough”, i.e., it only works for “long times” asymptotically!

And finally, we can write out the transformations of acceleration between the two frames in a explicit way:

, i.e., the non-relativistic result, as we expected!

. As we could expect, the velocity increases in such a way that “saturates” its own increasing rate and the speed of light is not surpassed. The fact that the speed of light can not be surpassed or exceeded is the unifying “theme” through special relativity, and it rest in the “noncompact” nature of the Lorentz group due to the

factor, since it would become infinity at v=c for massive particles.

It is inevitable: as time passes, a relativistic treatment is indispensable, as the next figures show 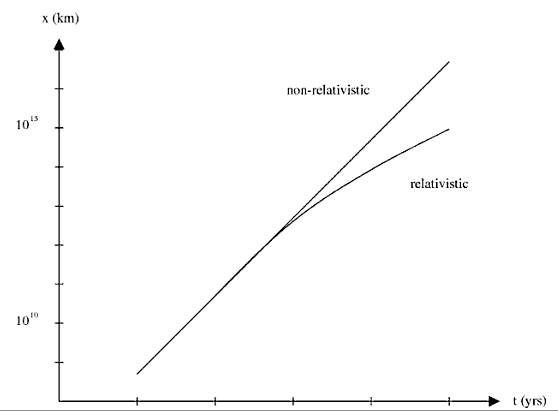 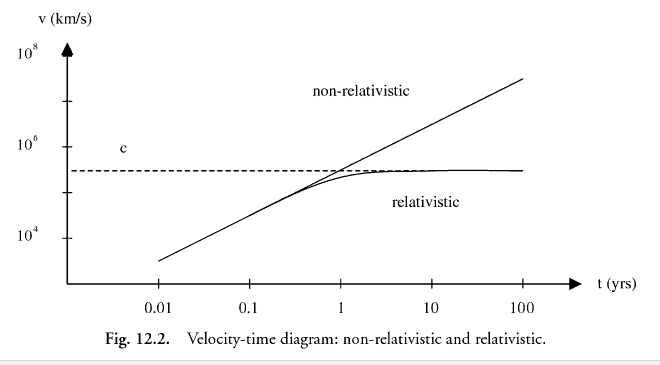 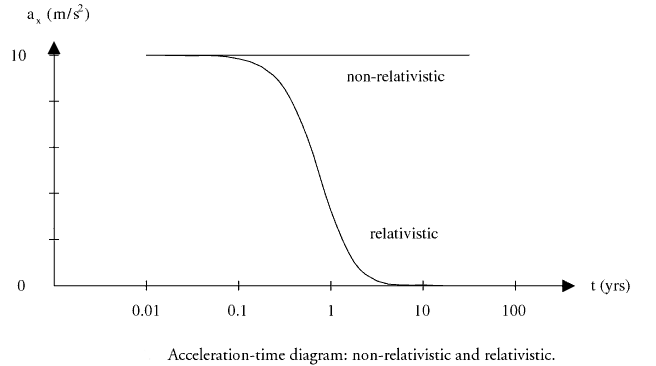 The next table is also remarkable (it can be easily built with the formulae we have seen till now with any available software):

Let us review the 3 main formulae until this moment

We have calculated these results in the S-frame, it is also important and interesting to calculate the same stuff in the S’-frame of the moving particle. The proper time

We can perform the integral as before

Finally, the proper time(time measured in the S’-frame) as a function of the elapsed time on Earth (S-frame) and the acceleration is given by the very important formula:

And now, let us set

, therefore we can write the above equation in the following way:

Remember now, from our previous math survey, that

, so we can invert the equation in order to obtain t as function of the proper time since:

Inserting this last equation in the relativistic equation path-time for the uniformly accelerated body in SR, we obtain:

Remark: this last result is compatible with a rapidity factor

From this, we can read the reason why we said before that constant acceleration is “meaningless” unless we mean or fix certain proper time in the S’-frame since whenever we select a proper time, and this last relationship gives us the “constant” acceleration observed from the S-frame after the transformation. Of course, from the S-frame, as this function shows, acceleration is not “constant”, it is only “instantaneously” constant. We have to take care in relativity with the meaning of the words. Mathematics is easy and clear and generally speaking it is more precise than “words”, common language is generally fuzzy unless we can explain what we are meaning!

Another election you can choose is

so there is no a big difference between these two cases with terrestrial-like gravity/acceleration.