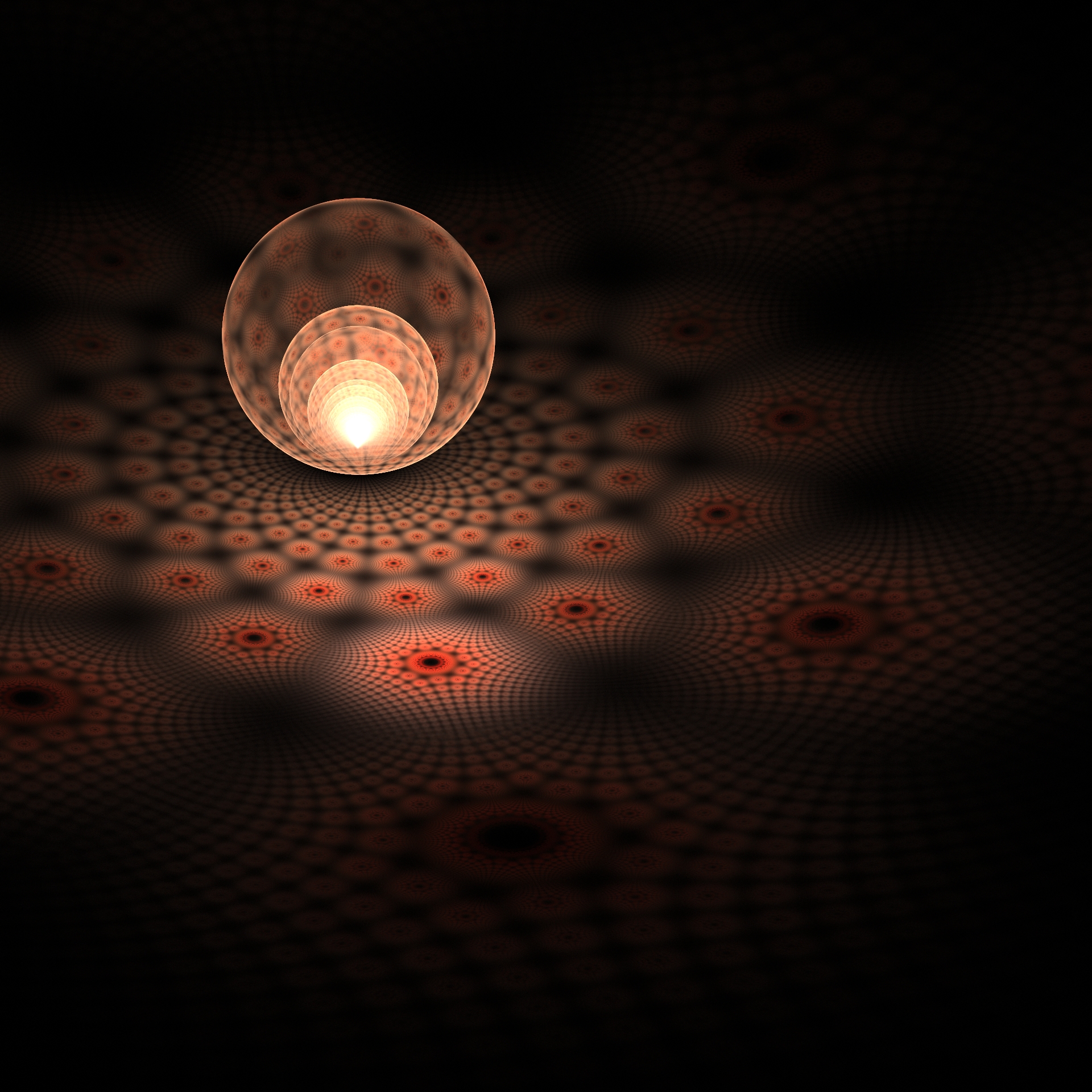 Invariance, symmetry and invariant quantities are in the essence, heart and core of Physmatics. Let me begin this post with classical physics. Newton’s fundamental law reads: 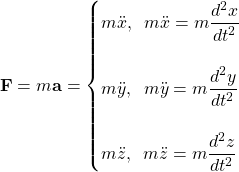 We select to make things simpler

We can easily observe by direct differentiation that Newton’s fundamental is invariant under translations in space, since mere substitution provides:

By the other hand, rotations around a fixed axis, say the z-axis, are transformations given by:

If we multiply by the mass these last equations and we differentiate with respect to time twice, keeping constant

Thus, we can say that Newton’s fundamental law is invariant under spatial translations and rotations. Its form is kept constant under those kind of transformations. Generally speaking, we also say that Newton’s law is “covariant”, but nowadays it is an abuse of language since the word covariant means something different in tensor analysis. So, be aware about the word “covariant” (specially in old texts). Today, we talk about “invariant laws”, or about the symmetry of certain equations under certain set of (group) transformations.

Newton’s law use the concept of acceleration:

or, in compact form

And then, the following equations are invariant under translations in space and rotations:

Intrinsic components of the aceleration provide a decomposition

is a unit vector in the direction of the velocity, and

In the case of motion along a general curve, we can approximate the motion in every point of the curve by a circle of radius R, and thus

By the other hand,

and we get the known expression for the centripetal acceleration:

More about invariant quantities in Classical Physics: the scalar (sometimes called dot) product of two vectors is invariant, since the length of every vector is constant in euclidean spaces under rotations and translations. For instance,

where we have introduced the

symbol to be the so-called Kronecker delta as “certain object” with components: its components are “1” whenever

and “0” otherwise. Of course, the Kronecker delta symbol “is” the identity matrix when the symbol have two indices. However, let me remark that “generalized delta Kronocker” with more indices do exist and it is not always posible to express easily that “tensor” in a matrix way, excepting using some clever tricks.

The scalar (dot) product can be computed with any vector quantity:

Moreover, there is a coordinate free definition as well:

We have also the important invariant quantities:

where the second equality holds if the force is constant along the trajectory. Moreover, in relativistic electromagnetism, you also get the wave-number 4-vector:

, that you can get from the plane wave solution:

where the phase invariant reads

Therefore, we deduce that

. Differentiating with respect to time, we get

And thus, the accelerations (and forces) that observe different inertial ( i.e., reference frames moving with constant relative velocity) frames are the same

And now, about symmetry. What are the symmetries of Physics? There are many interesting transformations and space-time symmetries. A non-completely exhaustive list is this one:

3. Rotations around some axis ( and with fixed angle).

4. Uniform velocity in straight line, a.k.a., galilean transformations for inertial observers. This symmetry “becomes” Lorentz boosts in the spacetime analogue of special relativity.

5. Time reversal ( inversion of the direction of time), T.

6. Reflections in space (under “a mirror”). It is also called parity P.

10. Conformal transformations (in the complex plane or in complex spaces).

Some examples are the angular momentum

or the magnetic force

Interestingly, the main difference between axial and polar vectors, i.e., between common vectors and pseudovectors is the fact that under P (parity), pseudovectors are “invariant” while common vectors change their sign, i.e., polar vectors become the opposite vector under reflection, and pseudovectors remain invariant. It can be easily found by inspection in the definition of angular momentum or the magnetic force ( or even the general definition of cross product given above).

Using the relativistic definition of 4-momentum:

, we are going to derive a known result, since

. Note that, in agreement with classical physics, from this

Therefore, inserting the relativistic expressions for energy and force into the power equation, we obtain:

Multiplying by 2M, and using the Leibniz rule for the differentiation of a product of two functions:

Integrating this, we deduce that

and thus, we have rederived the notion of “relativistic mass”

where the repeated dummy index implies summation over it. This convention of understanding summation over repeated indices is called Einstein’s covention and it is due to Einstein himself. Another main point about notation is that some people prefer the use of a

while other people use

. We will use the notation with

unless we find some notational issue. Unlikely to the 3d world, the 4d world of special relativity forces us to use something different to the Kronecker delta in the above scalar product. This new object is generally called pseudoeuclidean “metric”, or Minkovski metric:

in our convention. The opposite convention for the scalar product would give

2nd. The square of a “spacetime” vector is its “lenght” in spacetime. It is given by:

In particular, for the position spacetime vector

3rd. Unlike the euclidean 3d space, 4d noneuclidean spacetime introduces “objects” non-null that whose “squared lenght” is equal to zero, and even weirder, objects that could provide a negative dot product!

4th. For spacetime events given by a spacetime vector

, and generally for any arbitrary events A and B (or 4-vectors) we can distinguish:

Thus, in the case of the spacetime (position) vector, every event can be classified into space-like, light-like (null or isotropic) and time-like types, depending on the sign of

. Moreover, the metric itself allows us to “raise or lower” indices, defining the following rules for components:

The minkovskian metric has a very cool feature too. Its “square” is the identity matrix. That is,

Then, the metric is its own inverse:

In components, it reads

Subindices are called generally “covariant” components, while superindices are called “contravariant” components. It is evident that euclidean spaces don’t distinguish between covariant and contravariant components. The metric is the gadget we use in non-euclidean metric spaces to raise and lower indices/components from tensor quantities. Tensors are multi-oriented objects. The metric itself is a second order tensor, more precisely, the metric is a second order rank 2 covariant tensor. 4-vectors are contravariant object with a single index. Upwards single-indexed tensors are contravariant vectors, downwards single-indexed tensores are covariant vectors. When a metric is introduced, there is no need to distinguish covariant and contravariant tensors, since the components can be calculated with the aid of the metric, so we speak about n-th rank tensors. Multi-indixed objects can have some features of symmetry. The metric is symmetric itself, for instance, under the interchange of subindices ( columns and rows). So, then

What kind of general objects can we use in Minkovski spacetime or even more general spaces? Firstly, we have scalar fields or functions, i.e., functions depending only on the spacetime coordinates:

Another objetct we have found are “vectors” or “oriented segments”. In 3d space, they transform as

. In 4d spacetime, we found

In 3d space, we also found pseudovectors. They are defined via the cross product, that in components read:

, where the new symbol

) is generally called Levi-Civita symbol. This symbol is the second constant object that we can use in any number of dimensions, like the Kronecker delta

The completely antisymmetric Levi-Civita symbol has some interesting identities related with the Kronecker delta. Thus, for instance, in 2d and 3d respectively:

We have also the useful identity:

The n-dimensional Levi-Civita symbol is defined as:

and its product in n-dimensions

or equivalently, given a nxn matrix

This last equation provides some new quantity called pseudoscalar, different from the scalar function in the sense it changes its sign under parity in 3d, while a common 3d scalar is invariant under parity! Generally speaking, determinants (pseudoscalars) in even dimensions are parity conserving, while determinants in odd dimensions don’t conserve parity.

Like the Kronecker delta, the epsilon or Levi-Civita can be generalized to 4 dimensions (or even to D-dimensions). In 4 dimensions:

In general, unlike the Kronecker deltas, the Levi-Civita epsilon symbols are not ordinary “tensors” (quantities with subindices and superindices, with some concrete properties under coordinate transformations) but more general entities called “weighted” tensors (sometimes they are also called tensorial densities). Indeed, the generalized Kronecker delta can be defined of order 2p is a type (p,p) tensor that is a completely antisymmetric in its ”p” upper indices, and also in its ”p” lower indices.  This characterization defines it up to a scalar multiplier.

Equivalently, it could be defined by induction in the following way:

In the particular case where  p=n  (the dimension of the vector space), in terms of the Levi-Civita symbol:

so the metric itself is “invariant” under a Lorentz transformation (boost). I would like to remark that the metric can be built from the basis vectors in the following way:

For Lorentz transformations, we get that

, i.e., for pseudo-orthogonal Lorentz transformations, taking the determinant, we deduce that

For instance, let us write 5 kind of Lorentz transformations:

1) Orthogonal rotations. They are continuous (proper) Lorentz transformations with a 3×3 submatrix

2) Boosts. They are continuous (proper) Lorentz transformations mixing spacelike and timelike coordinates. The matrix has in this case the form:

. The matrix of this transformation is:

4) Parity. Discrete non-proper Lorentz transformation. It inverts only the spacelike components of true vectors ( be aware of pseudovectors!) in the sense

. Sometimes, it is denoted by P, parity, and this transformation belongs to

. It is defined as follows:

5) Time reversal, T. Discrete non-proper Lorentz transformation. It inverts the direction of time in the sense that

belongs to the set

don’t change the sense of time. This is why they are called orthochronous!