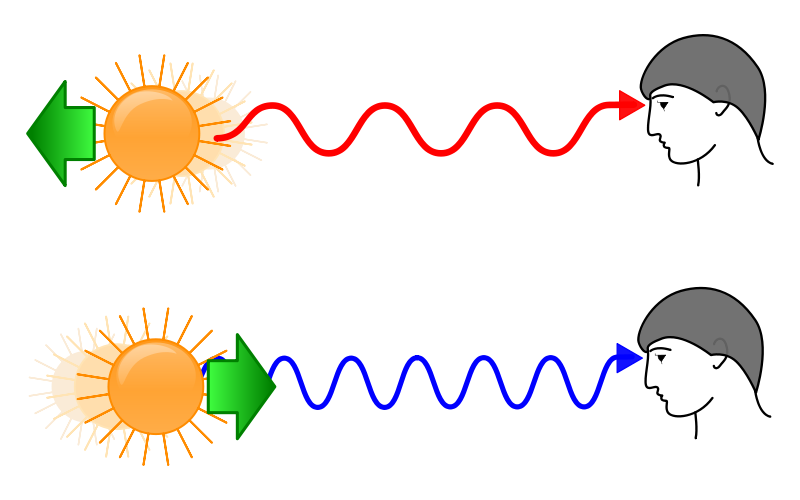 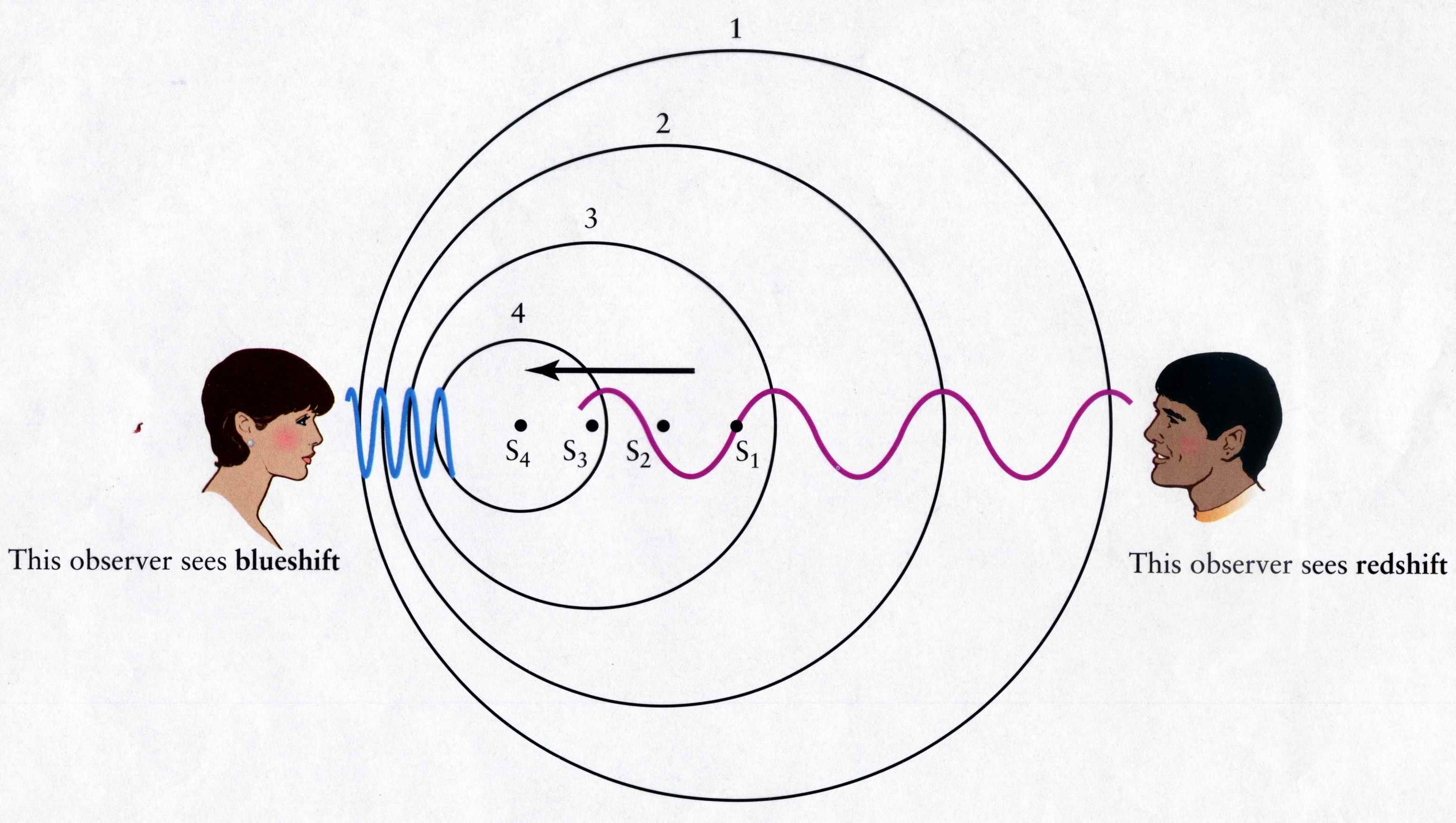 The Doppler effect is a very important phenomenon both in classical wave motion and relativistic physics. For instance, nowadays it is used to the detect exoplanets and it has lots of applications in Astrophysics and Cosmology.

Firstly, we remember the main definitions we are going to need here today.

Sometimes, we will be using the symbol

A plane (sometimes electromagnetic) wave is defined by the oscillation:

, then the wave number is lightlike (null or isotropic) and then

Using the Lorentz transformations for the wave number spacetime vector, we get:

i.e., if the angle with the direction of motion is

or for the normalized frequency shift

, and thus, the angular frequency (also the frecuency itself, since there is only a factor 2 times the number pi of difference) changes with the motion of the source. When the velocity is “low”, i.e.,

We then calculate the normalized frequency shift from

), then the frequency increases, and when the source moves away from the receiver (

and the difference in frequency would become

There is an alternative deduction of these formulae. The time that an electromagnetic wave uses to run a distance equal to the wavelength, in a certain inertial frame S’ moving with relative speed V to another inertial frame S at rest, is equal to:

is the frequency of the source. Due to the time dilation of special relativity

The redshift (or Doppler displacement) is generally defined as:

, we get the classical result

If we use the stellar aberration formula:

the last equation can be recasted in terms of

Again, for a transversal motion,

, we get a transversal Doppler effect:

Remark: Remember that the Doppler shift formulae are only valid if the relative motion (of both source and observer/receiver) is slower than the speed of the (electromagnetic) wave, i.e., if

In the final part of this entry, we are going to derive the most general formula for Doppler effect, given an arbitrary motion of source and observer, in both classical and relativistic Physics. Recall that the Doppler shift in Classical Physics for an arbitrary observer is given by a nice equation:

is the velocity of the (electromagnetic) wave in certain medium,

with the “line of sight”, while

is the velocity of the source forming an angle

with the line of sight/observation. If we write

The most general Doppler shift formula, in the relativistic case, reads:

are the velocities of the source and the observer at the time of emission and reception, respectively,

are the corresponding beta boost parameters,

going in the contrary sense than that of

The deduction of this general Doppler shift formula can be sketched in a simple fashion. For a signal using some propagating wave, we deduce:

Differentiating with respect to

, we obtain in a simple way:

Finally, using the fact that

, and that the proper time induces an extra gamma factor due to time dilation

and we calculate for the frequency:

where the PREFACTOR denotes the previously calculated ratio between differential times. Finally, elementary algebra let us derive the expression:

is being emitted along the negative x’-axis toward the origin of the S-frame. The inverse Lorentz transformation provides:

By the other hand, by the relativistic Doppler effect we have seen that the frequency f’ in the S’-frame is transformed into the frequency f in the S-frame if we use the following equation:

If we divide the last two equations we get:

Then, if we write

AN ALTERNATIVE HEURISTIC DEDUCTION OF THE RELATIVISTIC DOPPLER EFFECT

In certain rest frame S, there is an observer receiving light beams/signals. The moving frame is the S’-frame and it is the emitter of light. The source of light approaches at velocity V, and it sends pulses with frequency

The distance between two consecutive light beams seen by the observer at S will be:

Therefore, the observer frequency in the S-frame is:

If the source approaches the observer, then

. If the source moves away from the observer, then

. In the case, the velocity of the source forms certain angle

in the direction of observation, the same argument produces:

In the case of transversal Doppler effect, we get

Final remark (I): If

, therefore we have that there is no Doppler effect at all.

. This gives the next angular direction in which Doppler effect can not be detected