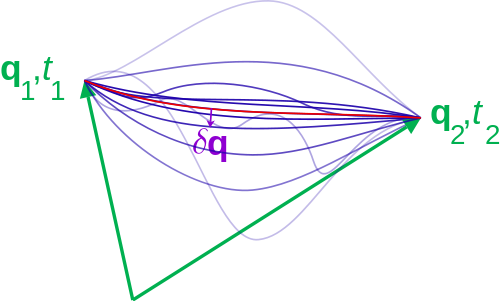 The hamiltonian formalism and the hamiltonian H in special relativity has some issues with the definition. In the case of the free particle one possible definition, not completely covariant, is the relativistic energy

There are two others interesting scalars in classical relativistic theories. They are the lagrangian L and the action functional S. The lagrangian is obtained through a Legendre transformation from the hamiltonian:

From the hamiltonian, we get the velocity using the so-called hamiltonian equation:

The action functional is the time integral of the lagrangian:

In the case of the free relativistic particle, we obtain

Using the relation between time and proper time (the time dilation formula):

And defining the infinitesimal proper length in spacetime as

, we get the simple and wonderful result:

Sometimes, the covariant lagrangian for the free particle is also obtained from the following argument. The proper length is defined as

The invariant in spacetime is related with the proper time in this way:

and the free coordinate action for the free particle would be:

Note, that since the election of time “t” is “free”, we can choose

Remark: the (rest) mass is the “coupling” constant for the free particle proper length to guess the free lagrangian

Now, we can see from this covariant action that the relativistic hamiltonian should be a feynmanity! From the equations of motion,

, different from H, can be build in the following way:

The meaning of this result is hidden in the the next identity ( Noether identity or “hamiltonian constraint” in some contexts):

This strange fact that

in SR, a feynmanity as the hamiltonian, is related to the Noether identity

for the free relativistic lagrangian, indeed, a consequence of the hamiltonian constraint and the so-called reparametrization invariance

. Note, in addition, that the free relativistic particle would also be invariant under diffeomorphisms

if we were to make the metric space-time dependent, i.e., if we make the substitution

. This last result is useful and important in general relativity, but we will not discuss it further in this moment. In summary, from the two possible hamiltonian in special relativity

the natural and more elegant (due to covariance/invariance) is the second one. Moreover, the free particle lagrangian and action are:

Remark: The true covariant lagrangian dynamics in SR is a “constrained” dynamics, i.e., dynamics where we are undetermined. There are more variables that equations as a result of a large set of symmetries ( reparametrization invariance and, in the case of local metrics, we also find diffeomorphism invarince).

The dynamical equations of motion, for a first order lagrangian (e.g., the free particle we have studied here), read for the lagrangian formalism:

By the other hand, for the hamiltonian formalism, dynamical equations are: