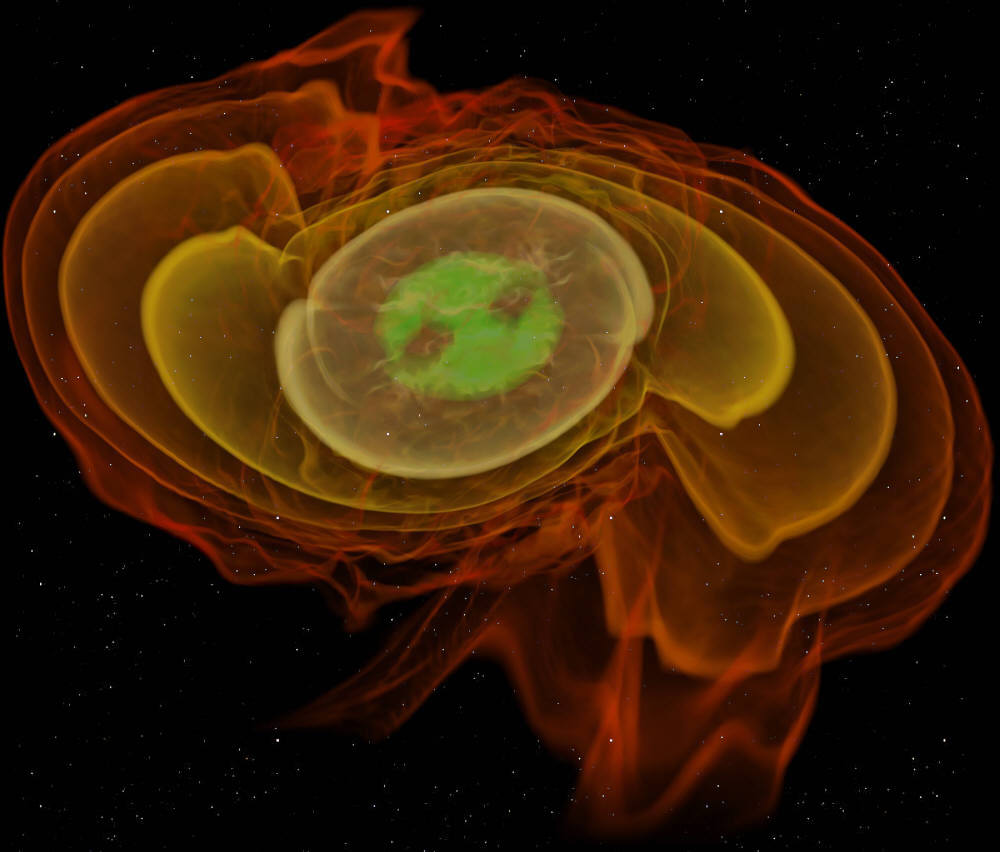 Relativistic hydrodynamics is a branch of Relativity Theory that faces with fluids and/or molecules (“gases”) moving at relativistic speeds. Today, this area of Special Relativity has been covered with many applications. However, it has not been so since, not so long ago, the questions was:

Where could one encounter fluids or “gases” that would propagate with velocities close to the the speed of light?

It was thought that it seemed a question to be very far away from any realistic or practical use. At present time, relativistic hydrodynamics IS an importan part of Cosmology and the theory of processes going on in the sorrounding and ambient space of neutron stars (likely, of the quark stars as well), compact massive objects and black holes. When the relativistic fluid flows under strong gravitational fields existing in those extreme conditions at relativistic speeds, it drives to a big heating and X-ray emission, for instance. And then, a relativistic treatment of matter is inevitable there.

Caution note: I will use units with c=1 in this post, in general, without loss of generality.

Let me review a bit the non-relativistic hydrodynamics of ideal fluids and gases. Their dynamics is governed by the continuity equation (mass conservation) and the Euler equation:

where the mass density and pressure of the fluid are respectively

. To complete the fluid equations, these equations need to be supplemented by an equation of state:

The continuity equation expresses the fact that mass in an invariant in classical fluid theory. The Euler equation says how the changes of pressure and forces affect to the velocity of the fluid, and finally the equation of state encodes the type of fluid we have at macroscopic level from the microscopic degrees of freedom that fluid theory itself can not see.

By the other hand, it is worth mentioning that we can not write the continuity equation into a covariant form

in such “a naive” way, with

. Why? It is pretty easy: it is a characteristic property of special relativity that the mass density

does not satisty such an equation, but we can derive a modified continuity equation that holds in SR. To build the right equations, we can proceed using an analogy with the electromagnetic field. Suppose we write an “stress-energy-momentum” tensor for an ideal fluid in the following way:

This tensor is written in the rest frame of a fluid. Note, then, that ideal fluids are characterized b the feature that their stress tensor

The generalization of the above tensor (an ideal fluid) to an arbitrary reference frame, in which the fluid element moves with some 4-velocity components

is given by the next natural generalization:

is the local fluid pressure field as measured in the rest frame of the fluid element, and

is the Minkovski metric. Therefore, the equations of motion can be found, in the absence of external forces, from the conservation laws:

Inserting the above tensor for the fluid, we get

We can find this equation to the non-relativistic Euler equation. The trick is easy: we firstly multiply by

and, after a short calculation, as we have that

, it provides us with

is not conserved itself. Recall that from the spatial part of our relativist fluid equations:

If we define the so-called “convective” or “comoving” derivative of an arbitrary tensor field T as the derivative:

we can rewrite the spatial part of the relativistic fluid dynamics as follows:

, excepting for a pressure term equals to

if we reintroduce units with the speed of light, and then it is the generalized mass-energy density conservation law from relativistic hydrodynamics!

Remark: In the case of electromagnetic radiation, we have a pressure term equals to

due to the tracelessneess of the electromagnetic stress-energy-momentum tensor.

Returning to our complete relativistic equation, we observe that the time component of that equation has NOT turned out to be the relativistic version of the continuity equation, as we warned before. The latter rather has to be postulated separately, using additional insights from elementary particle physics! In this way, instead of a mass density conservation, we do know, e.g., that the baryon density

does satisfy an equation of continuity (at least from current knowledge of fundamental physics):

and it merely says that baryon number is conserved under reasonable conditions ( of course, we do suspect at current time that baryon number conservation is not a good symmetry in the early Universe, but today it holds with good accuracy). Similarly, it can be said that for an electron gas, the baryon density has to be replaced by the so-called lepton density in the equation of continuity, where we could consider a gas with electrons, muons, tauons and their antiparticles. We could guess the neutrino density as well with suitable care. However, for phtoons and “mesons” there is NO continuity equation since tehy can be created and annihilated arbitrarily.

The relationship between n, p and

can be obtained from the equation of state and basic thermodynamics from the definition of pressure:

Thus, with these equations, we can know the density

and the baryon density

differ by the density

of the inner energy ( we have defined

, e.g. in the binding energy of a nucleus, and it is positive if energy has to be spent, e.g. if we make a compressional work onto the state.

or entropy per baryon and the temperature are defined by postulating the thermodynamical equilibrium and, with that integrating factor

coming from elementary thermodynamics, we can write

since we have an specific volume equal to

. Entropy is constant along a stream line of the ideal fluid, and it follows from

if we divide by n

In conclusion, we deduce that the time conservation of the relativistic conservation law of fluid hydrodynamics tell us that in the case of an ideal fluid no energy is converted into heat, and entropy itself remains constant! Isn’t it amazing? Entropy rocks!

Final remark (I): For non-ideal fluids, the ansatz for the energy-momentum-stress tensor hast to be modified into this one

Final remark (II): Relativistic hydrodynamics can be generalized to charged fluids and plasmas, and in that case, it is called relativistic magnetohydrodynamics. One simply adds the stress-energy-momentum tensor of the electromagnetic field to the tensor of the fluid in such a way it is conserved as well, i.e., with zero divergence. Thus, we would get an extra Lorentz-like force into the relativistic generalization of the Euler equation!