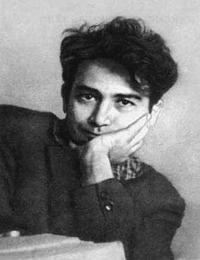 I discussed and reviewed the important Cherenkov effect and radiation in the previous post, here:

Today we are going to study a relatively new effect ( new experimentally speaking, because it was first detected when I was an undergraduate student, in 2000) but it is not so new from the theoretical aside (theoretically, it was predicted in 1962). This effect is closely related to the Cherenkov effect. It is named Askaryan effect or Askaryan radiation, see below after a brief recapitulation of the Cherenkov effect last post we are going to do in the next lines.

We do know that charged particles moving faster than light through the vacuum emit Cherenkov radiation. How can a particle move faster than light? The weak speed of a charged particle can exceed the speed of light. That is all. About some speculations about the so-called tachyonic gamma ray emissions, let me say that the existence of superluminal energy transfer has not been established so far, and one may ask why. There are two options:

1) The simplest solution is that superluminal quanta just do not exist, the vacuum speed of light being the definitive upper bound.

2) The second solution is that the interaction of superluminal radiation with matter is very small, the quotient of tachyonic and electric fine-structure constants being

. Therefore superluminal quanta and their substratum are hard to detect.

We are being bombarded by cosmic rays, and even more, we are being bombarded by neutrinos. Indeed, we expect that ultra-high energy (UHE) neutrinos or extreme ultra-high energy (EHE) neutrinos will hit us as too. When neutrinos interact wiht matter, they create some shower, specifically in dense media. Thus, we expect that the electrons and positrons which travel faster than the speed of light in these media or even in the air and they should emit (coherent) Cherenkov-like radiation.

Let me quote what wikipedia say about him: Gurgen Askaryan (December 14, 1928-1997) was a prominent Soviet (armenian) physicist, famous for his discovery of the self-focusing of light, pioneering studies of light-matter interactions, and the discovery and investigation of the interaction of high-energy particles with condensed matter. He published more than 200 papers about different topics in high-energy physics.

Other interesting ideas by Askaryan: the bubble chamber (he discovered the idea independently to Glaser, but he did not published it so he did not win the Nobel Prize), laser self-focussing (one of the main contributions of Askaryan to non-linear optics was the self-focusing of light), and the acoustic UHECR detection proposal. Askaryan was the first to note that the outer few metres of the Moon’s surface, known as the regolith, would be a sufficiently transparent medium for detecting microwaves from the charge excess in particle showers. The radio transparency of the regolith has since been confirmed by the Apollo missions.

If you want to learn more about Askaryan ideas and his biography, you can read them here: http://en.wikipedia.org/wiki/Gurgen_Askaryan

What is the Askaryan effect?

The next figure is from the Askaryan radiation detected by the ANITA experiment: 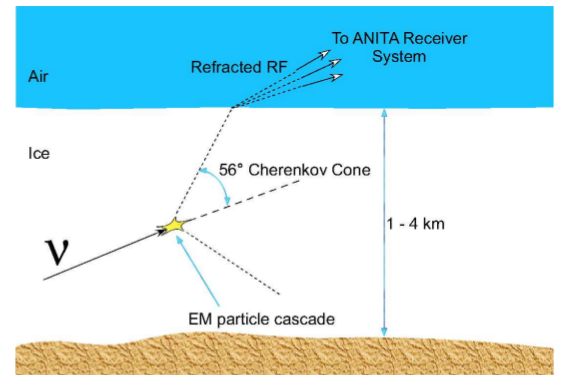 The Askaryan effect is the phenomenon whereby a particle traveling faster than the phase velocity of light in a dense dielectric medium (such as salt, ice or the lunar regolith) produces a shower of secondary charged particles which contain a charge anisotropy  and thus emits a cone of coherent radiation in the radio or microwave  part of the electromagnetic spectrum. It is similar, or more precisely it is based on the Cherenkov effect.

High energy processes such as Compton, Bhabha and Moller scattering along with positron annihilation  rapidly lead to about a 20%-30% negative charge asymmetry in the electron-photon part of a cascade. For instance, they can be initiated by UHE (higher than, e.g.,100 PeV) neutrinos.

1962, Askaryan first hypothesized this effect and suggested that it should lead to strong coherent radio and microwave Cherenkov emission for showers propagating within the dielectric. Since the dimensions of the clump of charged particles are small compared to the wavelength of the radio waves, the shower radiates coherent radio Cherenkov radiation whose power is proportional to the square of the net charge in the shower. The net charge in the shower is proportional to the primary energy so the radiated power scales quadratically with the shower energy,

Indeed, these radio and coherent radiations are originated by the Cherenkov effect radiation. We do know that:

from the charged particle in a dense (refractive) medium experimenting Cherenkov radiation (CR). Every charge emittes a field

. Then, the power is proportional to

. In a dense medium:

We have two different experimental and interesting cases:

A) The optical case, with

. Then, we expect random phases and

B) The microwave case, with

. In this situation, we expect coherent radiation/waves with

We can exploit this effect in large natural volumes transparent to radio (dry): pure ice, salt formations, lunar regolith,…The peak of this coherent radiation for sand is produced at a frequency around

, while the peak for ice is obtained around

The first experimental confirmation of the Askaryan effect detection were the next two experiments:

Indeed, in 1965, Askaryan himself proposes ice and salt as possible target media. The reasons are easy to understand:
1st. They provide high densities and then it means a higher probability for neutrino interaction.
2nd. They have a high refractive index. Therefore, the Cerenkov emission becomes important.
3rd. Salt and ice are radio transparent, and of course, they can be supplied in large volumes available throughout the world.

The advantages of radio detection of UHE neutrinos provided by the Askaryan effect are very interesting:

1) Low attenuation: clear signals from large detection volumes.
2) We can observe distant and inclined events.
3) It has a high duty cycle: good statistics in less time.
4) I has a relative low cost: large areas covered.
5) It is available for neutrinos and/or any other chargeless/neutral particle!

Problems with this Askaryan effect detection are, though: radio interference, correlation with shower parameters (still unclear), and that it is limited only to particles with very large energies, about 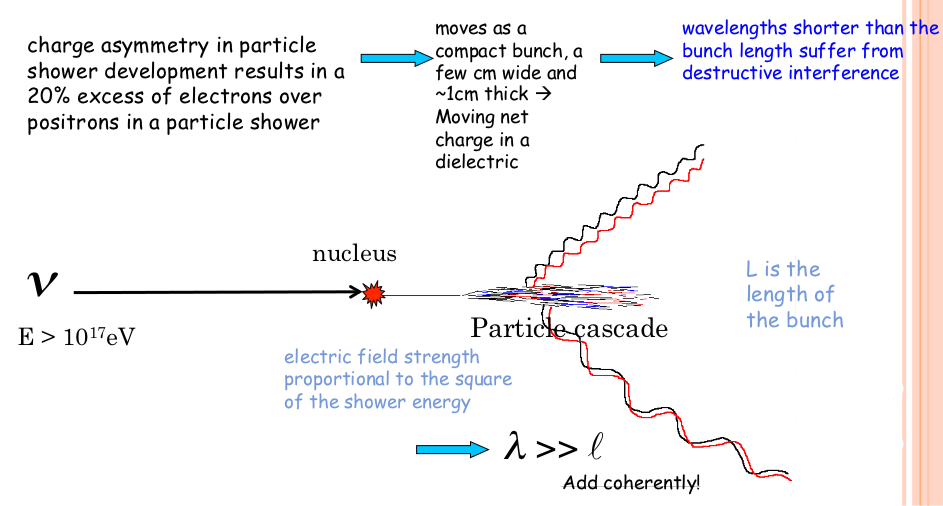 Why the Askaryan effect matters?

It matters since it allows for the detection of UHE neutrinos, and it is “universal” for chargeless/neutral particles like neutrinos, just in the same way that the Cherenkov effect is universal for charged particles. And tracking UHE neutrinos is important because they point out towards its source, and it is suspected they can help us to solve the riddle of the origin and composition of cosmic rays, the acceleration mechanism of cosmic radiation, the nuclear interactions of astrophysical objects, and tracking the highest energy emissions of the Universe we can observe at current time.

Is it real? Has it been detected? Yes, after 38 years, it has been detected. This effect was firstly demonstrated in sand (2000), rock salt (2004) and ice (2006), all done in a laboratory at SLAC and later it has been checked in several independent experiments around the world. Indeed, I remember to have heard about this effect during my darker years as undergraduate student. Fortunately or not, I forgot about it till now. In spite of the beauty of it!

Moreover, it has extra applications to neutrino detection using the Moon as target: GLUE (detectors are Goldstone RTs), NuMoon (Westerbork array; LOFAR), or RESUN (EVLA), or the LUNASKA project. Using ice as target, there has been other experiments checking the reality of this effect: FORTE (satellite observing Greenland ice sheet), RICE (co-deployed on AMANDA strings, viewing Antarctic ice), and the celebrated ANITA (balloon-borne over Antarctica, viewing Antarctic ice) experiment.

Furthermore, even some experiments have used the Moon (an it is likely some others will be built in the near future) as a neutrino detector using the Askaryan radiation (the analogue for neutral particles of the Cherenkov effect, don’t forget the spot!).

Askaryan radiation is important because is one of the portals of the UHE neutrino observation coming from cosmic rays. The mysteries of cosmic rays continue today. We have detected indeed extremely energetic cosmic rays beyond the

scale. Their origin is yet unsolved. We hope that tracking neutrinos we will discover the sources of those rays and their nature/composition. We don’t understand or know any mechanism being able to accelerate particles up to those incredible particles. At current time, IceCube has not detected UHE neutrinos, and it is a serious issue for curren theories and models. It is a challenge if we don’t observe enough UHE neutrinos as the Standard Model would predict. Would it mean that cosmic rays are exclusively composed by heavy nuclei or protons? Are we making a bad modelling of the spectrum of the sources and the nuclear models of stars as it happened before the neutrino oscillations at SuperKamiokande and Kamikande were detected -e.g.:SN1987A? Is there some kind of new Physics living at those scales and avoiding the GZK limit we would naively expect from our current theories?