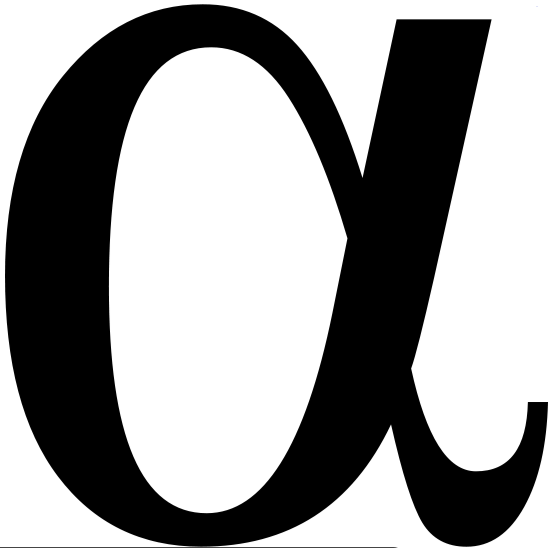 The topic today is to review a beautiful paper and to discuss its relevance for theoretical physics. The paper is: Comment on the cosmological constant and a gravitational alpha by R.J.Adler. You can read it here: http://arxiv.org/abs/1110.3358

. Its value is given by

Why is the fine structure constant important? Well, we can undertand it if we insert the values of the constants that made the electromagnetic alpha constant:

being the electron elemental charge,

the Planck’s constant divided by two pi, c is the speed of light and where we are using units with

is the Coulomb constant, generally with a value

, but we rescale units in order it has a value equal to the unit. We will discuss more about frequently used system of units soon.

) and the speed of light, it codes some deep information of the Universe inside of it. The electromagnetic alpha

is quantum and relativistic itself, and it also is related to elemental charges. Why alpha has the value it has is a complete mystery. Many people has tried to elucidate why it has the value it has today, but there is no reason of why it should have the value it has. Of course, it happens as well with some other constants but this one is particularly important since it is involved in some important numbers in atomic physics and the most elemental atom, the hydrogen atom.

The second natural scale of length in atomic physics is the so-called Bohr radius. It is given by the formula:

Therefore, there is a natural mass ratio between those two length scales, and it shows that it is precisely the electromagnetic fine structure constant alpha

Furthermore, we can show that the electromagnetic alpha also is related to the mass ration between the electron energy in the fundamental orbit of the hydrogen atom and the electron rest energy. These two scales of energy are given by:

Then, the ratio of those two “natural” energies in atomic physics reads:

R.J.Adler’s paper remarks that there is a cosmological/microscopic analogue of the above two ratios, and they involve the infamous Einstein’s cosmological constant. In Cosmology, we have two natural (ultimate?) length scales:

, or equivalently the squared value

. Its value is given by:

respectively, and they are related to each other in a simple way. The dimensions of the cosmological constant are given by

The de Sitter radius and the cosmological constant are related through a simple equation:

Moreover, the data also imply some density energy associated to the cosmological “constant”, and it is generally called Dark Energy. This density energy from data is written as:

and from this, it can be also proved that

where we have introduced the experimentally deduced value

If we introduce the numbers of the constants, we easily obtain the gravitational cosmological alpha value and its inverse:

They are really small and large numbers! Following the the atomic analogy, we can also create a ratio between two cosmologically relevant density energies:

Planck’s energy is defined as

, i.e., it is the energy density of Planck’s energy concentrated inside a cube with volume

. Mathematically speaking, it is

It is an huge density energy!

Remark: Energy density is equivalent to pressure in special relativity hydrodynamics. That is,

represents here matter (not energy) density ( with units in

). Of course, turning matter density into energy density requires a multiplication by

. This equivalence between vacuum pressure and energy density is one of the reasons because some astrophysicists, cosmologists and theoretical physicists call “vacuum pressure” to the “dark energy/cosmological constant” term in the study of the cosmic components derived from the total energy density

Using the Einstein’s field equations, it can be shown that the cosmological constant gives a contribution to the stress-energy-momentum tensor. The component

is related to the dark energy ( a.k.a. the cosmological constant) and allow us to define the energy density

Using the previous equations for G as a function of Planck’s length, the Planck’s constant and the speed of light, and the definitions of Planck’s energy and de Sitter radius, we can rewrite the above energy density as follows:

Thus, we can evaluate the ration between these two energy densities! It provides

and the inverse ratio will be

So, we have obtained two additional really tiny and huge values for

but the surprise comes from the values of the gravitational alpha values and ratios. Some comments are straightforward:

1) Understanding atomic physics involved the discovery of Planck’s constant and the quantities associated to it at fundamental quantum level ( Böhr radius, the Rydberg’s constant,…). Understanding the Cosmological Constant value and the mismatch or stunning ratios between the equivalent relevant quantities, likely, require that

can be viewed as a new “fundamental constant” or/and it can play a dynamical role somehow ( e.g., varying in some unknown way with energy or local position).

2) Currently, the cosmological parameters and fits suggest that

is “constant”, but we can not be totally sure it has not varied slowly with time. And there is a related idea called quintessence, in which the cosmological “constant” is related to some dynamical field and/or to inflation. However, present data say that the cosmological constant IS truly constant. How can it be so? We are not sure, since our physical theories can hardly explain the cosmological constant, its value, and why it is current density energy is radically different from the vacuum energy estimates coming from Quantum Field Theories.

is an equivalent way to express the biggest issue in theoretical physics. A naturalness problem called the cosmological constant problem.

1) Gravitational alpha prime. It is defined as the ratio between the electron rest mass and the Planck’s mass squared:

, we can also use the proton rest mass instead of the electron mass to get a new gravitational alpha.

2) Gravitational alpha double prime. It is defined as the ratio between the proton rest mass and the Planck’s mass squared:

Finally, we could guess an intermediate gravitational alpha, mixing the electron and proton mass.

3) Gravitational alpha triple prime. It is defined as the ration between the product of the electron and proton rest masses with the Planck’s mass squared:

We can compare the 4 gravitational alphas and their inverse values, and additionally compare them with

These inequations mean that the electromagnetic fine structure constant

is (at ordinary energies) 42 orders of magnitude bigger than

, 39 orders of magnitude bigger than

, 36 orders of magnitude bigger than

and, of course, 58 orders of magnitude bigger than

. Indeed, we could extend this analysis to include the “fine structure constant” of Quantum Chromodynamics (QCD) as well. It would be given by:

since generally we define

by 3 orders of magnitude. However, as strong nuclear forces are short range interactions, they only matter in the atomic nuclei, where confinement, and color forces dominate on every other fundamental interaction. Interestingly, at high energies, QCD coupling constant has a property called asymptotic freedom. But it is another story not to be discussed here! If we take the alpha strong coupling into account the full hierarchy of alphas is given by:

ADDENDUM: After I finished this post, I discovered a striking (and interesting itself) connection between

. The relation or coincidence is the following relationship

Is this relationship fundamental or accidental? The answer is unknown. However, since the electric charge (via electromagnetic alpha) is not related a priori with the gravitational constant or Planck mass ( or the cosmological constant via the above gravitational alpha) in any known way I find particularly stunning such a coincidence up to 5 significant digits! Any way, there are many unexplained numerical coincidences that are completely accidental and meaningless, and then, it is not clear why this numeral result should be relevant for the connection between electromagnetism and gravity/cosmology, but it is interesting at least as a curiosity and “joke” of Nature.

Some quotes about the electromagnetic alpha from wikipedia http://en.wikipedia.org/wiki/Fine-structure_constant

“(…)There is a most profound and beautiful question associated with the observed coupling constant, e – the amplitude for a real electron to emit or absorb a real photon. It is a simple number that has been experimentally determined to be close to 0.08542455. (My physicist friends won’t recognize this number, because they like to remember it as the inverse of its square: about 137.03597 with about an uncertainty of about 2 in the last decimal place. It has been a mystery ever since it was discovered more than fifty years ago, and all good theoretical physicists put this number up on their wall and worry about it.) Immediately you would like to know where this number for a coupling comes from: is it related to pi or perhaps to the base of natural logarithms? Nobody knows. It’s one of the greatest damn mysteries of physics: a magic number that comes to us with no understanding by man. You might say the “hand of God” wrote that number, and “we don’t know how He pushed his pencil.” We know what kind of a dance to do experimentally to measure this number very accurately, but we don’t know what kind of dance to do on the computer to make this number come out, without putting it in secretly! (…)”. R.P.Feynman, QED: The Strange Theory of Light and Matter, Princeton University Press, p.129.

“(…) If alpha [the fine-structure constant] were bigger than it really is, we should not be able to distinguish matter from ether [the vacuum, nothingness], and our task to disentangle the natural laws would be hopelessly difficult. The fact however that alpha has just its value 1/137 is certainly no chance but itself a law of nature. It is clear that the explanation of this number must be the central problem of natural philosophy.(…)” Max Born, in A.I. Miller’s book Deciphering the Cosmic Number: The Strange Friendship of Wolfgang Pauli and Carl Jung. p. 253. Publisher W.W. Norton & Co.(2009).

“(…)The mystery about α is actually a double mystery. The first mystery – the origin of its numerical value α ≈ 1/137 has been recognized and discussed for decades. The second mystery – the range of its domain – is generally unrecognized.(…)” Malcolm H. Mac Gregor, M.H. MacGregor (2007). The Power of Alpha.