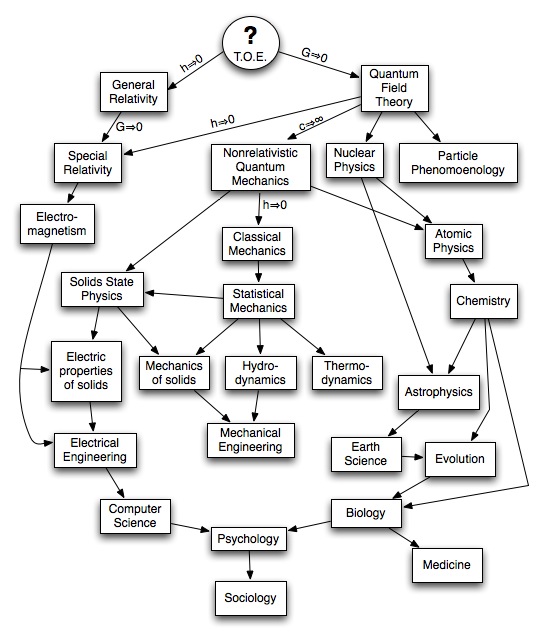 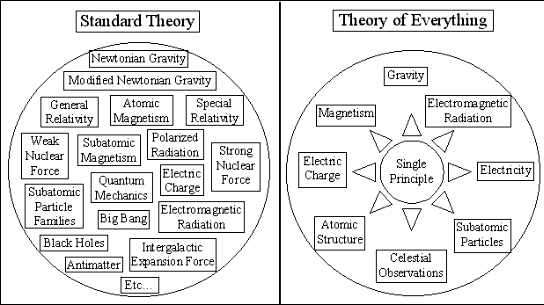 1) Is the Higgs like candidate ATLAS/CMS observe a SM Higgs? The Higgs particle is important since it is (like neutrinos) a portal or gate into New Physics. New particles couple naturally to fundamental scalars, so SM deviations can be seen in the Higgs sector better. Indeed, there is a nice table showing the comparison between common Higgs particles and BSM alternative theories in collider physics: 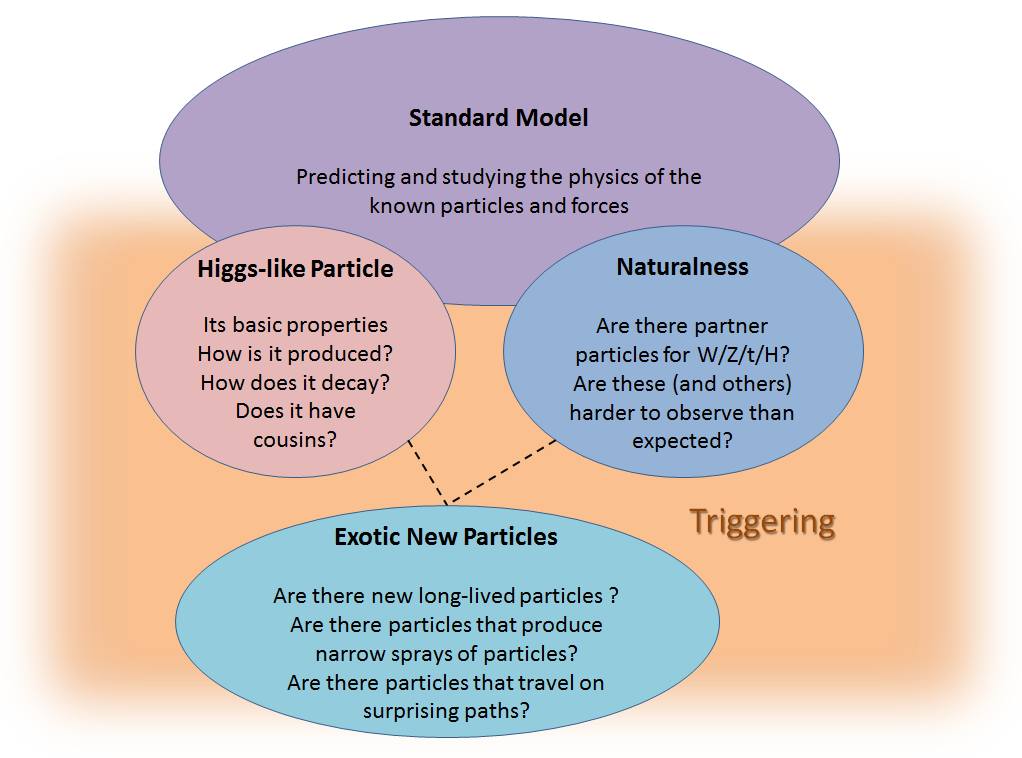 It can, but it could also be an impostor: a technidilaton, a Kaluza-Klein resonance, a dilaton-Higgs, or some other weird particle. However, at current time, it seems to be a SM Higgs. 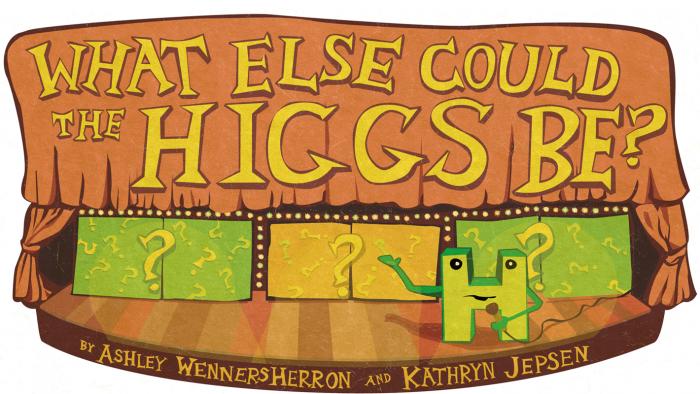 2) Supersymmetry, a.k.a., SUSY. Double the particle spectrum in order to cancel higher order contributions to the Higgs mass with extra particles ( and fermion “loops”). Does it work? It seems so. It also seems to provide natural DM candidates, but it does not provide any fundamental hint about Dark Energy or the cosmological constant problem. Specially, since we don’t observe (apparently) SUSY at low energy, it has to be broken. If SUSY is broken at higher energy beyon the EW symmetry breaking ( about 246 GeV), it looses some of the main theoretical motivations. Any way, SUSY theories are the most Beyond the Standard Model (BSM) theories. E.g.: supergravity or superstrings in any variant do contain SUSY some variant of SUSY. However, is SUSY realizaed in Nature? We do not know. Yet, we have searched for SUSY since the LEP/TeVatron era, and yet the answer is negative. Of course, it does not mean SUSY does not exist, but as time passes, I see that SUSY is unlikely and unlikely! And let me add that I could hardly admit that some theory like the Minimal Supersymmetric Standard Model (MSSM) could be true, it has too many free parameters. Of course, at current time, you can find some MSSM fit to the SM data, but it is not simple. The MSSM or similar models have the following particle spectrum: 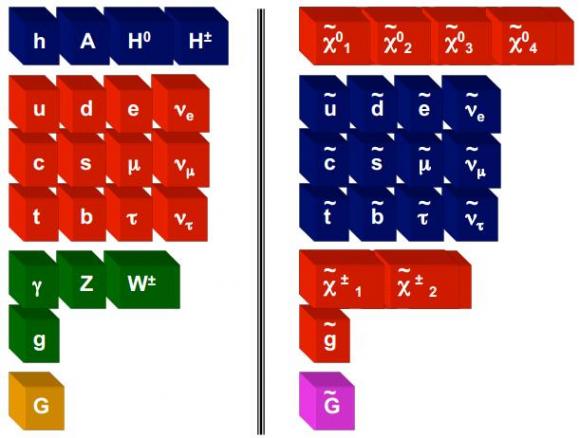 However, some experiments have constrained very hard the SUSY space parameter in order to be consistent with all the current SM data: 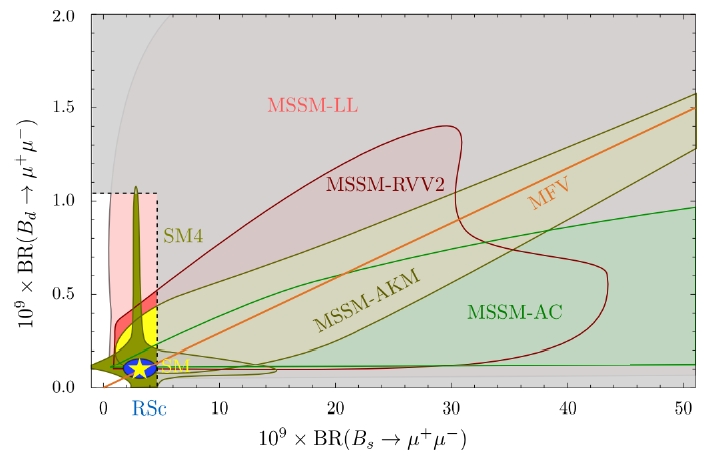 Moreover, the LHC has not found SUSY particles yet. ATLAS provides some bounds: 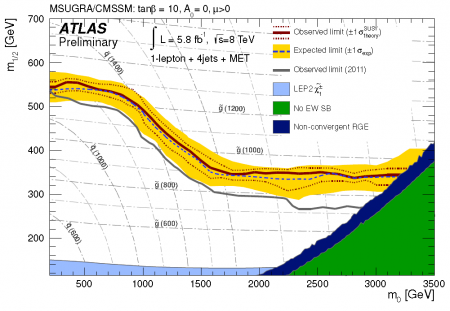 The LHC alone can not rule out the MSSM and lots of SUSY variants, but it is killing some “naive” models and theories. We will need the Linear Collider, a muon collider and/or a Higgs factory in order to kill them all (if possible) with the aid of neutrino experiments, cosmological constraints and likely, further experiments. SUSY can not be excluded but the whole road map of experiments in High Energy Physics can falsify the theory. I am sure of that point. It is only an issue of time (10 or 20 years at most).

3) Technicolor and preonic models. After the Higgs discovery, these models have lost followers. But be aware! If the Higgs particle were composite by fermions, such as technifermions, or it were made of preonic constituents, we could resurrect these theories. However, as long as the Higgs boson shows to be fundamental, and it can be tested, technicolor and preonic models are ruled out (excepting, perhaps, some particular models containing technidilatons or some particle that could mimick the SM Higgs features. It is hard, but it is not impossible to build such a model).

4) Neutrinos. The weirdest particles (and likely the most fascinant) in the SM provide a unique tool and framework to test New Physics and BSM Physics. In particular, neutrinos can be used to test the inner structure of hadrons, and the most exotic processes in the Universe (such a Supernovae/Hypernovae explosions!). There are many reactor neutrino experiments, some accelerator based neutrino oscillation experiments are running and, furthermore, we also have solar neutrino detectors and neutrino telescopes like IceCube and ANTARES. In the nuclear physics domain, we are also studying the deep structure of neutrinos via beta decays. If neutrino are their own antiparticles (note that this option can be realized in the SM known particles only for electrically neutral particles), then neutrinos are Majorana particles. If neutrino are Majorana particles, then neutrinoless double beta decay is possible. Currently, excepting a claim (likely false) by a russian group, there is no evidence for this ultra-weird beta decay. However, it would be a hint of New Physics and BSM physics too.

5) Superstrings and extra dimensional theories. Superstrings (and/or M-theory) are a candidate for the infamous Theory Of Everything (TOE). Feynman opposed himself to this approch in the last years of his life. He used to say he was waiting for the superstring “breaking”. Beyond this particular opinion, the theory has lot of defenders and it has some beautiful features both mathematically and physically. Via model building, you can even derive the SM from the superstrings. But it is not so easy. There are zillions of ways to do it. And nobody knows what select the right geometry/phenomenology from the others. Kaluza-Klein (KK) theories and other more modern theories use extra dimensions just like superstrings but without saying that the whole stuff is made of “strings”. KK theories allow to derive the gravity plus electromagnetism action from a 5 dimensional theory. And the set-up can be generalized for other interactions as well. However, again, there are some mysteries and problems unsolved. Why does a particular KK select a particular geometry/compactification space? What about the Planck scale excitations arising in the KK-states? However, some models with extra dimensions are useful since they can be tested and they provide a model to explain the Higgs mass as a pseudo-Goldstone boson in the extra dimension. It is the so-called Little Higgs theory. Of course, you can also have, beyond strings or KK-particles, arbitrary p-branes (p-dimensional extended objects like membranes and so on). Some extra dimensional scenarios like de ADD (Arkani-Hamed, Dvali-Dmopoulos) large extra dimension picture of gravity plus SM in order to solve the hierarchy problem and/or the celebrated warped brane-world by Randall-Sundrum (the RS model) were a the extra dimension hides itself in a non-factorizable metric.

6) Quantum gravity and Loop Quantum Gravity. Quantum gravity is a complete mystery. However, the supertring theory approach claims to handle with it. Moreover, a parallel and independent approach called Loop Quantum Gravity (LQG) claims to be able to quantize gravity in a non-canonical way using “loop variables”. Loop variables are the analogue for gravity to Wilson loops in non-abelian gauge theories like QCD. LQG provides some predictions like a discrete length, area and volume spectra, and complementary predictions related to the scale where spacetime discretenes appears. However, experimental for Quantum Gravity (QG) and/or LQG is yet lacking (seemingly).

7) CPT and Lorentz invariance violations. Currently, special relativity, General Relativity and Quantum Field Theories like the SM are consistent with Lorentz invariance and CPT invariance. Lorentz invariance is essential to explain any relativistic prediction of High Energy Experiments, and/or, experiments happening to velocities close to the speed of light. Lorentz invariance says that motion is relative and that the speed of light is the upper limit for material particles. However, there are some theories and extensions of the SM that allow Lorentz invariance violations. Even more, there is a whole theoretical framework called the Standard Model Extension (SME) to accomplish these violations and CPT violations. Relativistic local gauge theories are generally built to be CPT invariance. However, they allow for C, CP, P, T, CT, PT violations. In the framework of constructive gauge field theories one can show that local gauge theories are indeed CPT invariant! Then, if we could measure some CPT violating phenomenon, it could hint New Physics/BSM Physics too. SME can handle CPT violating terms in the same way it faces Lorentz violating terms with a unified tool. Note that, even if known Physics imply that Lorentz violations are “equivalent” to CPT violations, in general, it is not true for some BSM theories. Any theory going beyond the SM could manifest itself in different kind of terms, and the elegant way to study these violations is using the SME formalism. Furthermore, some theories BSM like some superstring models or LQG predict that the relativistid dispersion relations of Special Relativity (SR) are modified at high energy. We can test this modified dispersion relationships with HEP experiments in colliders and/or astrophysical observations.

9) Entanglement and the QM/QFT origins/fundational principles. Quantum Mechanics and QFT are included in the SM. One of the most amusing QM phenomena is “entanglement”. Moreover, QM and/or QFT is a relatively large set of rules that remain to be understood. Some people think that the origin is entanglement via Information Theory and entropy. Other people yet think that QM is an approximation to a classical theory. QM and QFT have been tested up to an incredibly inhuman level of precision in some types of measurements. So, why the SM/QM/QFT works as good? What is wrong if any? Is the entanglement valid also for gravitons despite the fact that gravity IS, apparently, a nonlinear theory? Has QM/QFT a foundational principle like the holographic principle arising from Black Hole  Physics, some superstring models, or the gauge/gravity duality seems to point out? If classical and quantum realms are related through dualities, does it mean that Quantum Mechanics could be seen as gravity in some particular background? Does it make sense?

10) Fundamental compositeness. Fermions and bosons, and nothing else even at higher energies? What about spacetime? Are fermions, bosons and spacetime emergent from a deeper structure we can not even imagine yet? What are the black hole microstates?

And there are more questions and likely many new theories and stuff to be discovered yet. But I will finish this thread dedicated to the SM here. I will make a further thread with more advanced topics in the future, when I can introduce the suitable mathematical background and I can be sure that I can explain group theory, fields and quantum fields at some minimum level. But again, that will be another thread! I hope you have enjoyed my first serious ( somewhat introductory though) series.

May the BSM theories and The Prime Principle be with you too! 😉