Brazil is experimenting an increase of scientific production. Today, I am going to explain this brazilian paper http://arxiv.org/abs/0711.4276v2 concerning the number of fundamental constants.

What do they claim? They basically argue that what we need is a convention for space and time measurements and nothing else. Specifically, they say that every physical observable

can be expressed as follows:

are pure dimensionless numbers, while

denote “basic units” of space and time. We could argue that these two last “fundamental units” of “space and time” were “quanta” of “space” and “time”, the mythical “choraons” and “chronons” some speculative theories of Quantum Gravity seem to suggest, but it would be another different story not related to this post!

After introducing the above statement, they discuss 2 procedures to measure with clocks and rulers, what they call

-protocol. They begin assuming some quantity in the CGS system (note that the idea is completely general and they could use the MKSA or any other traditional system of units):

are dimensionless constants. And then, the 2 protocols are defined:

1st. G-protocol. Multiply the above equation (2) by

we gain some bonuses:

i) The unit M from CGS “vanishes” or is “erased” from physical observables.

iii) Masses being measured in

imply that from Newton’s gravitational law

are units with physical dimension

, the gravitational constant, is some kind of conversion factor between mass and “volume acceleration”

. This G-protocol applied to the Planck constant provides

and it has dimensions of

we get the so-called h-protocol. The consequences are:

i) M units disappear from physical laws and quantities, as before.

ii) h is erased and vanishes from every equation, law and quantity.

iii) Masses are measured in units of

, e.g., from the Compton equation we get in the h-protocol

are units of mass in the h-protocol with dimensions

. Therefore, h is the conversion factor between inverse areolar velocity

. In this protocol the inverse of the Compton length measures “inertia”, and indeed this fact fits with some recent proposals to determine a definition of kg independent from the old MKSA pattern (the famous iridium “thing”, which is know now not to have a 1 kg mass). Moreover, we also get that

The two protocols can be summarized in a nice table

They also derive the mysterious relations between charge and mass that we saw in the previous post about Pavšič units, i.e., they also derive

and it is equivalent to

Finally, in their conclusions, they remark that two constants,

seems to be well enough for physical theories, and it squashes or squeezes the Gamov-Ivanenko-Landau-Okun (GILO) cube to a nice plane. I include the two final figure for completion, but I urge you to read their whole paper to get a global view before you look at them. 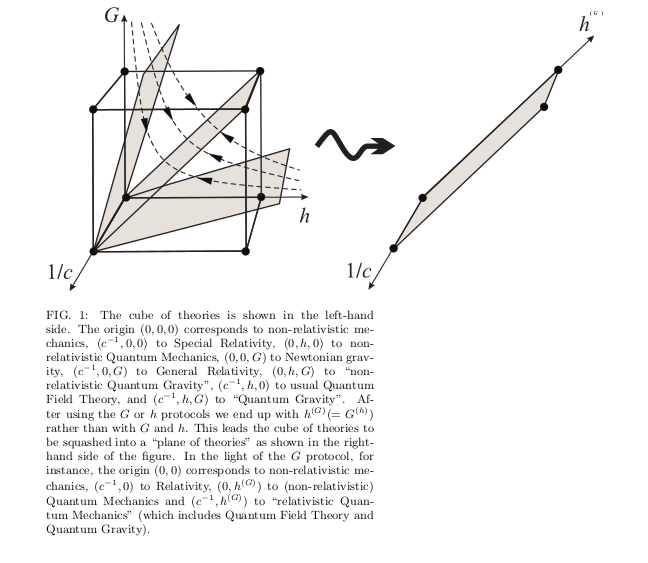 Are 2 fundamental constants enough? Are Veneziano (from a completely different viewpoint) and these brazilian physicists right? Time will tell, but I find interesting these thoughts!

See you soon in another wonderful post about Physmatics and systems of units!