Imagine that an idealised bug of negligible dimensions is hiding at the end of a hole of length L. A rivet has a shaft length of 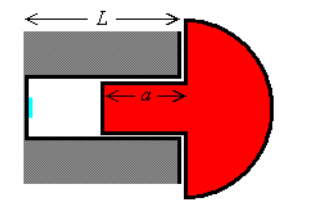 Clearly the bug is “safe” when the rivet head is flush to the (very resiliente) surface. The problem arises as follows. Consider what happens when the rivet slams into the surface at a speed of

, where c is the speed of light and

. One of the essences of the special theory of relativity is that objects moving relative to our frame of reference are shortened in the direction of motion by a factor

is generally called the Lorentz dilation factor, as readers of this blog already know. However, from the point of view (frame of reference) of the bug, the rivet shaft is even shorter and therefore the bug should continue to be safe, and thus fast the rivet is moving. 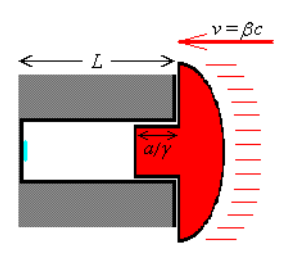 Remark: this idea assumes that both objects are ideally rigid! We will return to this “fact” later.

From the frame of reference of the rivet, the rivet is stationary and unchanged, but the hole is moving fast and is shortened by the Lorentz contraction to 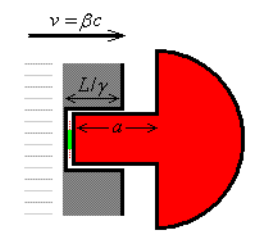 If the approach speed is fast enough, so that

, then the end of the hole slams into the tip of the rivet before the surface
can reach the head of the rivet. The bug is squashed! This is the “paradox”: is the bug squashed or not?

There are many good sources for this paradox (a relative of the pole-barn paradox), such as:
1)http://en.wikipedia.org/wiki/Wikipedia:Reference_desk/Archives/Science/2006_October_19#Bug_Rivet_Paradox

2) A nice animation can be found here  http://math.ucr.edu/~jdp/Relativity/Bug_Rivet.html

In this blog post we are going to solve this “paradox” in the framework of special relativity.

In the frame of reference of the bug, the entire rivet cannot come to a complete stop all at the same instant. Information
cannot travel faster than the speed of light. It takes time for knowledge that the rivet head has slammed into the surface to
travel down the shaft of the rivet. Until each part of the shaft receives the information that the rivet head has stopped, that part keeps going at speed

. The information proceeds down the shaft at speed c while the tip continues to move at speed 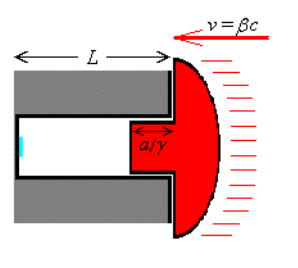 The tip cannot stop until a time

after the head has stopped. During that time the tip travels a distance

. The bug will be squashed if

we can calculate that

The bug will be squashed if the following condition holds

or equivalently, after some algebraic manipulations, the bug will be squashed if:

Conclusion (in bug’s reference frame): the bug will be definitively squashed when

Check: It can be verified that the limits

are valid and physically meaningful.

Note that the impact of the rivet head always happens before the bug is squashed.

In the frame of reference of the rivet, the bug is definitively squashed whenever 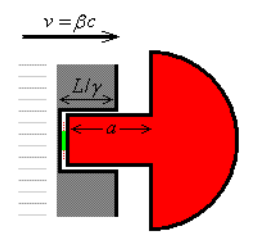 The bug is squashed before the impact of the surface on the rivet head. This last equation (and thus

) is a velocity higher than

Conclusion (in rivet’s reference frame): The entire surface cannot come to an abrupt stop at the same instant. It takes time for the information about the impact of the rivet tip on the end of the hole to reach the surface that is rushing towards the rivet head. Let us now examine the case where the speed is not high enough for the Lorentz-contracted hole to be shorter than the rivet shaft in the frame of reference of the rivet. Now the observers agree that the impact of the rivet head happens first. When the surface slams into contact with the head of the rivet, it takes time for information about that impact to travel down to the end of the hole. During this time the hole continues to move towards the tip of the rivet. 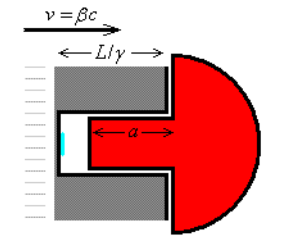 during which time the bug moves a distance

In the rivet’s reference frame, therefore, The bug is squashed if the following condition holds

and from this equation, we get same minimum speed that guarantees the squashing of the bug as was the case in the frame of reference of the bug! That is:

, and that resolves the “paradox”. They also agree that the impact of rivet head on surface happens before the bug is squashed, provided that the following condition is satisfied:

i.e., they agree if the impact of rivet head on surface happens before the bug is squashed

Otherwise, they disagree on which event happens first.  For instance, if

For speeds this high, the observer in the bug’s frame of reference still deduces that the rivet-head impact happens first, but the other observer deduces that the bug is squashed first. This is consistent with the relativity of simultaneity! At the critical speed, when