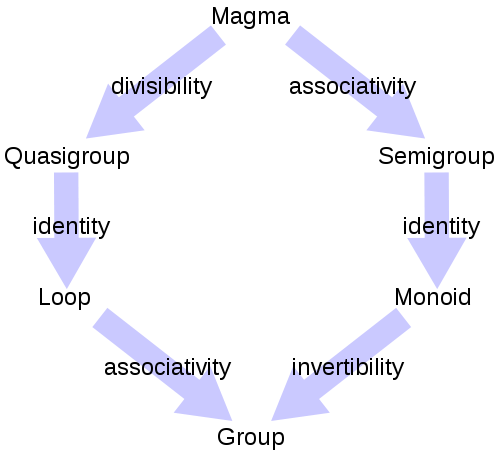 Basic definitions of group theory: that is the topic today! We need some background previous to the “group axioms”.

Definition (1). Set is a collection of objects with some properties. Objects in the set are called “elements” or “members” of the set.

Definition (2). Category is some collection of objects linked or related theirselves with “arrows” or “maps”. Example: set is a category formed with sets as objects and functions as arrows. Other categories are, e.g., Top (topological spaces) or Ring (ring structures).

Category theory studies the main mathematical entities and their relationships, and it is a branch of mathematics which seeks to generalize all of mathematics in terms of objects and arrows, independent of what the objects and arrows represent. Virtually every branch of modern mathematics can be described in terms of categories, and doing so often reveals deep insights and similarities between seemingly different areas of mathematics. The nice fact about “group theory” is that there is a complete list of “group-like” structures: magma, semigroup, monoid, group, abelian group, loop, quasigroup, groupoid, category, semicategory, vector space, ring, semi-ring, and many other cool structures.

Definition (3). Function f is every map/relation/application between two sets X (domain) and Y(codomain) which associates each

, and it is usally denoted by

Defintion (4). Functor F is every morphism/map/application of any category A to another category B.

be a set. A binary operation

is any function taking “pairs” or “couples” of elements from that set into the own set. Mathematically speaking:

Examples of binary operations are the usual operations of addition(+), substraction(-), product(x) and division(/) of real numbers.

Definition (6). Given a set

, a binary relation R in X is a subset

instead of the confusing notation

Definition (7). A binary relation R in

is called an equivalence relation if it satisfies the following conditions:

This gadget, the equivalence relation, allow us to classify the elements of every set in disjoint classes: the so-called equivalence classes.

be an equivalence realtion,

is its equivalence class, denoted by

We are ready for studying the group axioms right now!

Definition (9). Group is a pair

where G is a non empty set (

is an internal, binary operation in G that satisfy 3 simple properties:

That is all folks! Well, not exactly…There are other complementary concepts we can define:

with satisfy the commutativity property for its binary/product operation. That is, an abelian group satisfy that

Otherwise, the group is said to be non-abelian. Groups are generally non-abelian but there are some important abelian groups.

a binary operation that satisfies tha associative property. Then the pair

is called a semigroup. That is, a semigroup is an associative binary operation but without the identity or inverse properties that groups have!

Definition (12). Quasigroup.  A quasigroup is a pair

is a set and the binary operation

Definition (13). Order. The order of a group

is the cardinal or number of elements in the structure

Generally, the order of a group is denoted between vertical bars,

is a group, then its elements satisfy the following rules that can be derived from the definitions above in a trivial fashion:

, or neutral element, in a group is unique.

is another identity element, then

is the inverse of

is the only inverse for that element.

The proof is equivalent to the previous one. It is let as an exercise for the reader.

, and where the prime denotes the inverse element.

is abelian if and only if (iff)