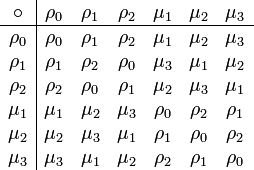 Today we are going to study some interesting aspects of group theory.

Definition (14). Subgroup. Given a group

a nonempty subset of G, then H is said to be a subgroup of

if and only if

is a subgroup, then we have

This is evident, because if H is a subgroup, then

By the other hand, if

then H is a subgroup.

And furthermore, it can be showed that associativity, neutral element and the inverse element in the subgroup are well-defined.

is a group where its order

then the group is finite.

Definition (16). Cayley table. The Cayley table is an arrangement if form of “table” where a finite group “writes” its products as a “multiplication table”.

The Cayley table is a very useful device describing completely the structure of a finite group by arranging all the possible products of every group element in a square table similar of an addition or multiplication table. Many properties and features of a finite group can be easily “read-off” from this table by observing its structure:

a) A group is abelian if and only if the multiplication table is symmetrical along its diagonal axis (from left to right).

c) The size and contents of the so-called group’s center.

d) The direct verification of the associativy property, something related to the so-called “Light’s associativity test”.

e) Due to the cancellation property, valid for groups, no row or column of a Cayley table may contain the same element TWICE. Thus each row and column of the table is a permutation of every element of the group. This fact limits which Cayley tables could be defined and which group operations are “valid”.

f) The distribution of identity elements on the Cayley table will be symmetric across the table’s main diagonal. Those that lie on the diagonal are their own inverse elements. This follows from the fact that in any group, even a non-abelian group, every element commutes with its own inverse element.

The order of the rows and columns of a Cayley table is in fact arbitrary. However, it is convenient to order them in the following manner: begin with the group’s identity element (always it is its own inverse), then list all the elements that are their own inverse elements, folowed by pairs of inverses listed adjacent to each other.

Remark: the center of a group G, denoted

, is the set of elements that commute with every element of G.

The center of G is always a subgroup of G.