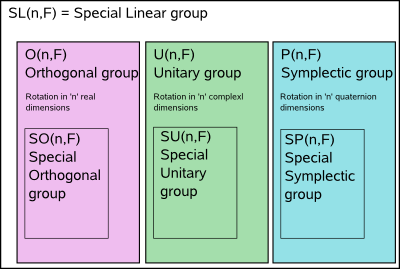 We are going to be more explicit and to work out some simple examples/exercises about elementary finite and infinite groups in this post.

Example 1. Let us define the finite group of three elements as

, and such as the element

(matrices/arrays with n rows and columns, square matrices) with

and where the matrix multiplication rule acts as group operation

. Then, this is an abelian group and its Cayley table can be written as follows:

be the following set of

is a group. The same set, with the operation “addition of matrices”

is NOT a group. This is left as an exercise for you.

denote the set of

matrices with determinant equal to one (the unit) and complex “entries”. A generic element of this set is:

, where the determinant is defined to be (of course, a little of linear algebra is assumed to be known)

This group, with the ordinary matrix multiplication as group operation, is in fact a well defined group, since:

is the identity matrix

iv) The associative law holds for matrix multiplication and thus

is a group (of matrices).

is a group. It can be easily proved checking that the neutral element is

and the inverse is

Example 6. The set of every

matrix with real or complex numbers with the operation + defined by

, is given by the matrices of the following class:

This group is in fact abelian (something that it is NOT generally true with 3D or higher dimensional “rotation groups”). It can be easily proved that the composition of 2 different matrices of the above type is another matrix of the same type, and that the inverse or the unit element exist for every continuous and differentiable function f of two arguments. The neutral element is in fact

is defined by the set of the following 3 matrices (related to the celebrated Euler angles):

or equivalently R has the form

This matrix is also important in neutrino oscillations and quark mixing. However, there the notation is a little bit different (beyond the fact that it has also extra “complex phases”). To simplify the notation and writing above, we can write

(even the notation is useful with “extra dimensions” or higher dimensional rotation groups), so the above 3D matrix is rewritten as follows:

In this case, the inverse element and the composition function are not “so easiy” as in the 2D case but they can be computed if you are patient and careful enough in a straightforward way. In particular, the composition rule for 3D rotations is NOT symmetrical in its arguments, and it shows that the group is non-abelian (although it has abelian subgroups, of course).

Example 9. The Lorentz group in 1D space and 2D spacetime is defined by the set of matrices ( with matrix multiplication and units

This group, as it has OPEN intervals, and they are not closed, is “non-compact”. Non-compactness is an ackward property sometimes in physical/mathematical applications, but it is important to know that feature. Compact groups are groups with parameters belonging to closed and bound/finite intervals (i.e., the interval limits can not be “infinite”). The Lorentz group in 2D spacetime IS abelian, and

. However, it has a modified “cool” composition rule (the relativistic “addition” of velocities) given by the function:

Moreover, the elements can be parametrized by a new parameter

, sometimes called “boost”, and defined as:

In terms of the boost parameter, Lorentz 2D spacetime transformations can be rewritten as follows:

The composition rule with this parametrization is in fact very simple and it is related to hyperbolic trigonometry.

Example 10. Groups with less than 6 elements. We can eneumerate the finite groups with the help of the Lagrange’s theorem and/or building explicitly every possible multiplication table for a given number of elements. The results are given by the following list:

i) Using the Lagrange theorem, as 1,2,3 and 5 are prime, we do know that there is only one group of each class, the respective cyclic group with 1, 2, 3 and 5 elements.

Example 11. Congruences (I). Given

in that set, we ay that

, and we denote it by

(sometimes it is writtem

This is an equivalence class/relation and we can define classes

and the set of classes

Example 12. Congruences (II). We define an addition and a product acting on the congruence equivalente classes:

With these operations it is possible to define in some cases groups, in the following way:

. It is an abelian group

is a group if and only if (iff)

is a prime number.

Example 13. Congruences (III). Write down the Cayley tables for

. This group is the (sub)group of the symmetrical group

Example 15. The translation group in space.

In every vector space, it forms an (abelian) group.

Example 17. Fractional linear transformations over the real numbers, the complex numbers or some other “beautiful and nice” class of numbers:

where A,B, C and D are generally real, complex numbers or “similar numbers” with

Example 18. Important matrix groups. Let A be the set of square matrices

(field said in the mathematical sense, not in the physical sense of “field”, be aware). The following sets with the usual matrix multiplication form a group with a continuous number of parameters (they are continuous infinite groups):

. The general linear group. It is a continuous group with

parameters. Generally, it is understood that the matrix is non-singlular in order to have a well-defined inverse element. Then,

. The special linear group. It has

parameters over the field. They are the subgroup of

with determinant equal to one.

. The unitary group. It is formed by complex matrices that verify the property

denotes “adjoint” and transposition (the so-called hermitian conjugate by physicists). It has

real parameters if you count in terms of real numbers.

. The subgroup of the unitary group formed with unitary matrices whose value is equal to the unit.

in this group. Its number of parameters is given by

. The number of real parameters doubles it to be

. The group of orthogonal matrices over the real numbers in euclidean space. It has

real parameters(generally “angles”). Any orthogonal matrix satisfies the property that

group is the subgroup of

. The symplectic group. Sp(2n, K) is given by the set of 2n×2n matrices A (with entries in K) that satisfy

. This version of the symplectic group is sometimes non-compact (and it is important in classical mechanics). There is another “symplectic” group, the group

. Then, the compact symplectic group can be related to the unitary group with some careful analysis on the number of parameters of the hermitian form.