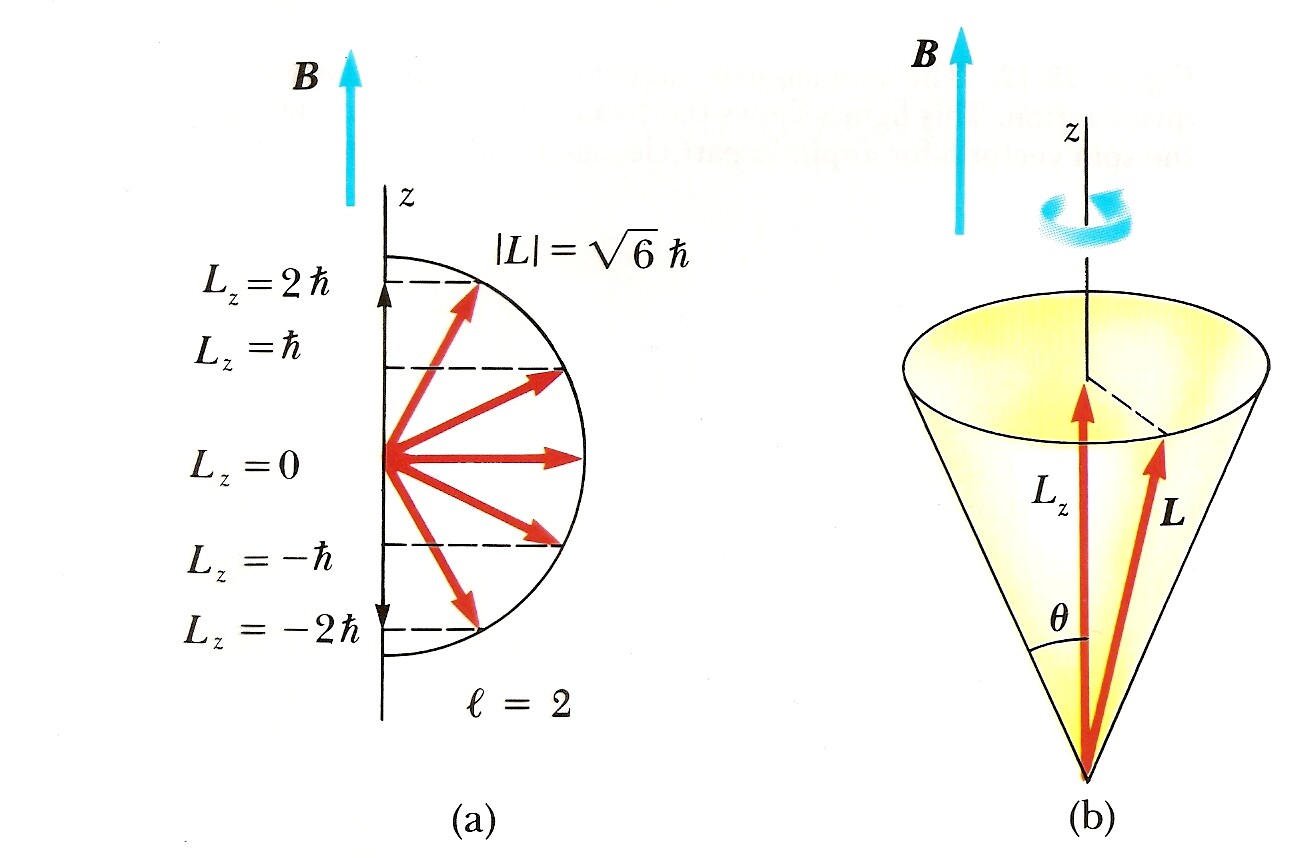 Take a triplet of linear operators,

. We say that these operators are angular momentum operators if they are “observable” or observable operators (i.e.,they are hermitian operators) and if they satisfy

The presence of an imaginary factor

makes compatible hermiticity and commutators for angular momentum. Note that if we choose antihermitian generators, the imaginary unit is absorbed in the above commutators.

We can determine the full angular momentum spectrum and many useful relations with only the above commutators, and that is why those relations are very important. Some interesting properties of angular momentum can be listed here:

are two angular momentum operators, and they sastisfy the above commutators, and if in addition to it, we also have that

2) In general, for any arbitrary and unitary vector

, we define the angular momentum in the direction of such a vector as

and for any 3 unitary and arbitrary vectos

3) To every two vectors

4) We define the so-called “ladder operators”

6) Commutators for the square of the angular momentum operator

are indefinite positive operators. It means that all their respective eigenvalues are positive numbers or zero. The proof is very simple

In fact this also implies the positivity of

. For the remaining operators, it is trivial to derive that

The general spectrum of the operators

can be calculated in a completely general way. We have to search for general eigenvalues

The general procedure is carried out in several well-defined steps:

1st. Taking into account the positivity of the above operators

, it means that there is some interesting options

. Then, we can write for all practical purposes

Specifically, we define how the operators

act onto the states, labeled by two parameters

in the following way

are positive, and we also have

That means that the following quantities are positive

Therefore, we have deduced that

2nd. We realize that

is an eigenstate of

is an eigenstate of

is an eigenvector of

is its eigenvalue. Check:

Therefore, we have deduced the following conditions:

, are the eigenstates of

. The same situation happens if we have vectors

(positive integer numbers). Thus, the sucessive action of any of these two operators increases (decreases) the eigenvalue

If we begin by certain number

, we can build a series of eigenstates/eigenvectors and their respective eigenvalues

can be integer or half-integer. The eigenvalues

have the same character but they can be only separated by one unit.

(1) The only possible eigenvalues for

(2) The only possible eigenvalues for

is an eigenvector for

We have seen that, given an state

, we can build a “complete set of eigenvectors” by sucessive application of ladder operators

! That is why ladder operators are so useful:

eigenvectors, all of them with the same quantum number

. The relative phase of

is not determined. Writing

from the previous calculations we easily get that

is determined but its phase IS not. Remember that a complex phase is arbitrary and we can choose it arbitrarily. The usual convention is to define

real and positive, so

If we addopt a concrete convention, the complete set of proper states/eigentates is:

This set of eigenstates of angular momentum will be denoted by

The previously studied (above) features tell  us that this invariant subspace

a) Invariant with respect to the application of

, and every function of them.

is an irreducible subspace in the sense we have studied in this thread: it has no invariant subspace itself!

The so-called matrix elements for angular momentum in these invariant subspaces can be obtained using the ladder opertors. We have

This case is trivial. There are no matrices for angular momentum. Well, there are…But they are

and they are all equal to cero. We have

The angular momentum operators are given by multiples of the so-called Pauli matrices. In fact,

The eigenvalues of these matrices are

. This property is related to the fact that the Pauli matrices anticommute.

iv) With the “unit” vector

This matrix has only two eigenvalues

for every value of the parameters

. In fact the matrix

has only an eigenvalue equal to zero, twice, and its eigenvector is:

has only an eigenvalue equal to zero twice and eigenvector

In this case, we get

The restriction to this subspace of the angular momentum operator gives us the following matrices:

is a nilpotent matrix since

with 3 equal null eigenvalues and one single eigenvector

In this case, we have

The spin-3/2 matrices can be obtained easily too. They are

and it is nilpotent in the sense that

and its eigenvalues is zero four times. The only eigenvector is the vector

. There is nice measure of entanglement, called tangle, that it shows to be nonzero for this state.

In this case, the invariant subspace is formed by the vectors

For the spin-2 particle, the spin matrices are given by the following

is nonnormal and nilpotent with

. Moreover, it has 5 null eigenvalues and a single eigenvector

We see that the spin matrices in 3D satisfy for general s:

ii) The ladder operators for spin s have the following matrix representation:

in the matrix sense and the above matrix could even be extended to the case of  a non-bounded spin particle. In that case the above matrix would become an infinite matrix! In the same way, for spin s, we also get that

null eigenvalues. The single eigenvector can be calculated quickly.

We are going to pay attention to the case of spin 1/2 and work out its relation with ordinary rotations and the concept of spinors.

Given the above rotation matrices for spin 1/2 in terms of Pauli matrices, we can use the following matrix property: if M is a matrix that satisfies

, then we can write that

From these equations and definitions, we can get the rotations around the 3 coordinate planes (it corresponds to the so-called Cayley-Hamilton parametrization).

a) Around the plance (XY), with the Z axis as the rotatin axis, we have

This matrix has a strange

periodicity! That is, rotations with angle

Imagine a system or particle with spin 1/2, such that the wavefunction is

If we apply a

rotation to this object, something that we call “spinor”, we naively would expect that the system would be invariant but instead of it, we have

The norm or length is conserved, though, since

These objects (spinors) own this feature as distinctive character. And it can be generalized to any value of j. In particular:

is an integer number, then

. This is the case of “bosons”/”force carriers”.

Rotation matrices and the subspaces E(j).

We learned that angular momentum operators

are the infinitesimal generators of “generalized” rotations (including those associated to the “internal spin variables”). A theorem, due to Euler, says that every rotation matrix can be written as a function of three angles. However, in Quantum Mechanics, we can choose an alternative representation given by:

Given a representation of J in the subspace

as we have seen above, and these matrices have the same dimension that those of the irreducible representation in the subspace

. There is a general procedure and parametrization of these rotation matrices for any value of

. Using a basis of eigenvectors in

and where we have defined the so-called Wigner coefficients

The reduced matrix only depends on one single angle (it was firstly calculated by Wigner in some specific cases):

Generally, we will find the rotation matrices when we “act” with some rotation operator onto the eigenstates of angular momentum, mathematically speaking:

See you in my final blog post about  basic group theory!