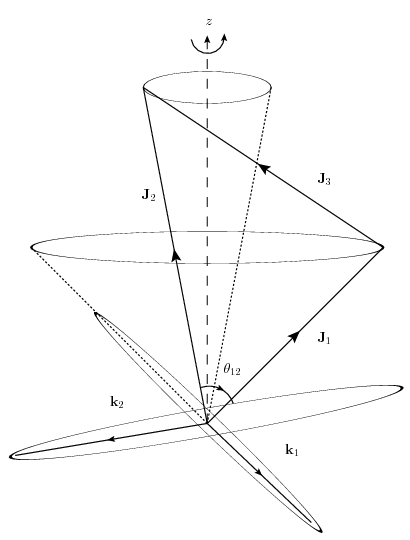 The topics are the composition of different angular momenta and something called irreducible tensor operators (ITO).

The following operators are defined for the whole composite system:

These operators are well enough to treat the addition of angular momentum: the sum of two angular momentum operators is always decomposable. A good complete set of vectors can be built with the so-called tensor product:

. However, these vector ARE simultaneous eigenvectors for the operators:

The eigenvalues are, respectively,

Examples of compositions of angular momentum operators are:

i) An electron in the hydrogen atom. You have

. In this case, the invariant hamiltonian under the rotation group for this system must satisfy

ii) N particles without spin. The angular momentum is

iii) Two particles with spin in 3D. The total angular momentum is the sum of the orbital part plus the spin part, as we have already seen:

In fact, the operators

is an additional set of “quantum numbers”.

The space generated by

, for a fixed number

, is an invariant subspace and it is also irreducible from the group theory viewpoint. That is, if we find a vector as a linear combination of eigenstates of a single particle, the remaining vectors can be built in the same way.

can be written as a linear combination of those

. But the point is that, due to the fact that the first set of vectors are eigenstates of

, then we can restrict the search for linear combinations in the vector space with dimension

formed by the vectors

quantum numbers. The next theorem is fundamental:

. Define the subspace, with

, formed by the vectors

and where the (quantum) numbers

are fixed, while the (quantum) numbers

are “variable”. Let us also define the operators

, and these eigenvector are denoted by

). Moreover, as a subspaces/total space:

ii) Orbital plus spin angular momentum of spin 1/2 particles. In this case,

. As subspaces/total space decomposition we have

This last subspace sum is equal to

and it is equal to

In the case we have to add several (more than two) angular momentum operators, we have the following general rule…

We should perform the composition or addition taking invariant subspaces two by two and using the previous theorem. However, the theory of the addition of angular momentum in the case of more than 2 terms is more complicated. In fact, the number of times that a particular subspace appears could not be ONE. A simple example is provided by 2 non identical particles (2 nucleons, a proton and a neutron), and in this case the total angular momentum with respect to the center of masses and the spin angular momentum add to form

This subspace sum is equal to

, the common set of eigenstates to

, the common set of eigenstates to

We can relate both sets! The procedure is conceptually (but not analytically, sometimes) simple:

are called Clebsch-Gordan coefficients. Moreover, we can also expand the above vectors as follows

and here the coefficients

are the inverse Clebsch-Gordan coefficients.

The Clebsch-Gordan coefficients have some beautiful features:

. They do depend on some coefficients

. For any value of J, the phase is determined by recurrence! It shows that

This convention implies that the Clebsch-Gordan (CG) coefficients are real numbers and they form an orthogonal matrix!

are necessarily null IF the following conditions are NOT satisfied:

rotation to the previous conditions. The two factors that arise are:

take their minimal/maximal values, the CG are equal to ONE. Check:

There are 4 important previous definitions for this topic:

the standard components of an irreducible tensor operator (ITO) of order

, if these components transform according to the following rules

, are the components of an irreducible tensor operator (ITO) of order k,

, if these components satisfy the commutation rules

The 1st and the 2nd definitions are completely equivalent, since the 2nd is the “infinitesimal” version of the 1st. The proof is trivial, by expansion of the operators in series and identification of the involved terms.

is an scalar operator, if it is an ITO with order k=0. Equivalently,

One simple way to express this result is the obvious and natural statement that scalar operators are rotationally invariant!

is a vector operator if

Equivalently, a vector operator is an ITO of order k=1.

The relation between the “standard components” (or “spherical”) and the “cartesian” (i.e.”rectangular”) components is defined by the equations:

In particular, for the position operator

Similarly, we can define the components for the momentum operator

or the angular momentum

1) Consider a set of

. Are they ITO too? If not, can they be decomposed into ITO?

2) Consider a set of

Some theorems help to answer these important questions:

are the “standard” components of certain ITO with order

. Moreover, we have, using the CG coefficientes:

be certain ITO and

These vectors are eigenvectors of the TOTAL angular momentum:

Note that, generally, these eigenstates are NOT normalized to the unit, but their moduli do not depend on

. Moreover, using the CG coefficients, we algo get

and where the quantity

is called the reduced matrix element.  The proof of this theorem is based on (4) main steps:

and use the theorem (2) above to obtain

3rd. Use the CG coefficients and their properties to rewrite the vectors in the base with J and M. Then, irrespectively the form of the ITO, we obtain

4th. Project onto some other different state, we get the desired result

The Wigner-Eckart theorem allows us to determine the so-called selection rules. If you have certain ITO and two bases

, then we can easily prove from the Wigner-Eckart theorem that

does NOT hold, then

These (selection) rules must be satisfied if some transitions are going to “occur”. There are some “superselection” rules in Quantum Mechanics, an important topic indeed, related to issues like this and symmetry, but this is not the thread where I am going to discuss it! So, stay tuned!

I wish you have enjoyed my basic lectures on group theory!!! Some day I will include more advanced topics, I promise, but you will have to wait with patience, a quality that every scientist should own! 🙂