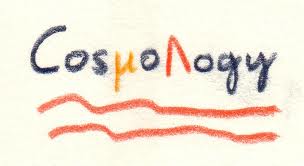 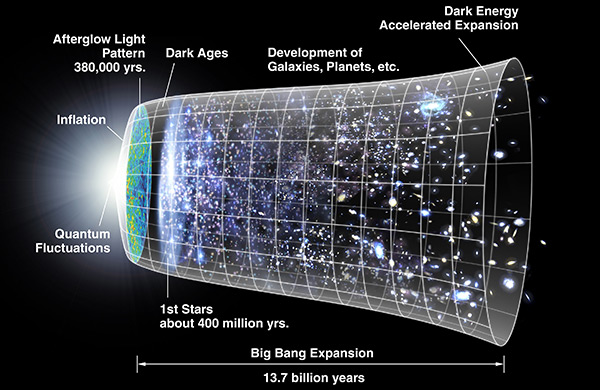 The next thread is devoted to Cosmology. I will intend to be clear and simple about equations and principles of current Cosmology with a General Relativity background.

First of all…I will review the basic concepts of natural units I am going to use here. We will be using the following natural units:

We will take the Planck energy to be given by

and the Planck mass

Remark: In general relativity and cosmology, these quantities are often rescaled with a factor

is what appears in the right handed side of Einstein field equations.

The solar mass is

and the parsec is given by the value

Well, current Cosmology is based on General Relativity. Even if I have not reviewed this theory with detail in this blog, the nice thing is that most of Cosmology can be learned with only a very little knowledge of this fenomenal theory. The most important ideas are: metric field, geodesics, Einstein equations and no much more…

In fact, newtonian gravity is a good approximation in some particular cases! And we do know that even in this pre-relativistic theory

via the Poisson’s equation

This idea, due to the equivalence principle, is generalized a little bit in the general relativistic framework

The spacetime geometry is determined by the metric tensor

. The matter content is given by the stress-energy-momentum tensor

. As we know one of these two elements, we can know, via Eisntein’s field equations the another. That is, given a metric tensor, we can tell how energy-momentum “moves” in space-time. Given the energy-momentum tensor, we can know what is the metric tensor in spacetime and we can guess how the spacetime bends… This is the origin of the famous motto: “Spacetime says matter how to move, energy-momentum says spacetime how to curve”! Remember that we have “deduced” the Einstein’s field equations in the previous post. Without a cosmological constant term, we get

Given a spacetime metric

, we can calculate the (affine/Levi-Civita) connection

The Einstein’s equations can be derived from the Einstein-Hilbert action we learned in the previous post, using the action principle and the integral

Finally, an important concept in General Relativity is that of isometry. The symmetry of the “spacetime manifold” is provided by a Killing vector that preserves transformations (isometries) of that manifold. Mathematically speaking, the Killing vector fields satisfy certain equation called the Killing equation

Killing vectors in n-dimensional (nD) spacetime. There are 3 main classes or types of 2D maximally symmetric that can be generalized to higher dimensions:

. This is a certain “hyperbolic” space.

. This is a certain “elliptic” space.

Current cosmological models are based in General Relativity AND  a simplification of the possible metrics due to the so-called Copernican (or cosmological) principle: the Universe is pretty much the same “everywhere” you are in the whole Universe! Remarkbly, the old “perfect” Copernican (cosmological) principle that states that the Universe is the same “everywhere” and “every time” is wrong. Phenomenologically, we have found that the Universe has evolved and it evolves, so the Universe was “different” when it was “young”. Therefore, the perfect cosmological principle is flawed. In fact, this experimental fact allows us to neglect some old theories like the “stationary state” and many other “crazy theories”.

What are the observational facts to keep the Copernican principle? It seems that:

1st. The distribution of matter (mainly galaxies, clusters,…) and radiation (the cosmic microwave background/CMB) in the observable Universe is homogenous and isotropic.

2nd. The Universe is NOT static. From Hubble’s pioneer works/observations, we do know that galaxies are receeding from us!

Therefore, these observations imply that our “local” Hubble volume during the Hubble time is similar to some spacetime with homogenous and isotropic spatial sections, i.e., it is a spacetime manifold

denotes the time “slice” and

is the called the scale factor.  The parameter

, then the Universe is “flat”. The manifold is

, then the Universe is “open”/hyperbolic. The manifold would be

, then the Universe is “closed”/spherical or elliptical. The manifold is then

Remark: The ansatz of local homogeneity and istoropy only implies that the spatial metric is locally one of the above three spaces, i.e.,

. It could be possible that these 3 spaces had different global (likely topological) properties beyond these two properties.

Kinematical features of a FRW Universe

The first property we are interested in Cosmology/Astrophysics is “distance”. Measuring distance in a expanding Universe like a FRW metric is “tricky”. There are several notions of “useful” distances. They can be measured by different methods/approaches and they provide something called sometimes “the cosmologidal distance ladder”:

1st. Comoving distance. It is a measure in which the distance is “taken” by a fixed coordinate.

2nd. Physical distance. It is essentially the comoving distance times the scale factor.

3rd. Luminosity distance. It uses the light emitted by some object to calculate its distance (provided the speed of light is taken constant, i.e., special relativity holds and we have a constant speed of light)

4th. Angular diameter distance. Another measure of distance using the notion of parallax and the “extension” of the physical object we measure somehow.

There is an important (complementary) idea in FRW Cosmology: the particle horizon. Consider a light-like particle with

The total comoving distance that light have traveled since a time

It shows that NO information could have propagated further and thus, there is a “comoving horizon” with every light-like particle! Here, this time is generally used as a “conformal time” as a convenient tiem variable for the particle. The physical distance to the particle horizon can be calculated

There are some important kinematical equations to be known

A) For the geodesic equation, the free falling particle, we have

for the FRW metric and, moreover, the energy-momentum vector

is defined by the usual invariant equation

This definition defines, in fact, the proper “time”

and the 0th component of the geodesic equation becomes

Therefore we have deduced that

. This is, in fact, the socalled “redshift”.  The cosmological  redshift parameter is more generally defined through the equation

B) The Hubble’s law.

If we use the comoving distance between a distant emitter and us, we get

for a expanding Universe! That is, we have used the fact that luminosity itself goes through a comoving spherical shell of radius

. Moreover, it shows that

The luminosity distance in the expanding shell is

and this is what we MEASURE in Astrophysics/Cosmology. Knowing

, we can express the luminosity distance in terms of the redshift. Taylor expansion provides something like this:

where higher order terms are sometimes referred as “statefinder parameters/variables”. In particular, we have

If we know that some object has a known length

, and it gives some angular “aperture” or separation

, the angular diameter distance is given by

The comoving size is defined as

, and the coming distance is again

. For “flat” space, we obtain that

In the case of “curved” spaces, we get

Gravity in General Relativity, a misnomer for the (locally) relativistic theory of gravitation, is described by a metric field, i.e., by a second range tensor (covariant tensor if we are purist with the nature of components). The metric field is related to the matter-energy-momentum content through the Einstein’s equations

. In fact, this type of tensor describes a perfect fluid with

(cosmological time) only. They are “state variables” somehow. Moreover, we have

for the fluid at rest in the comoving frame. The Friedmann equations are indeed the EFE for a FRW metric Universe

for the 00th compoent as “constraint equation.

for the iith components.

Moreover, we also have

and this conservation law implies that

Therefore, we have got two independent equations for three unknowns

. We need an additional equation. In fact, the equation of state for

provides such an additional equation. It gives the “dynamics of matter”!

In summary, the basic equations for Cosmology in a FRW metric, via EFE, are the Friedmann’s equations (they are secretly the EFE for the FRW metric) supplemented with the energy-momentum conservations law and the equation of state for the pressure

There are many kinds of “matter-energy” content of our interest in Cosmology. Some of them can be described by a simple equation of state:

Remark (I): Particle physics enters Cosmology here! Matter dynamics or matter fields ARE the matter content of the Universe.

Remark (II): Existence of a Big Bang (and a spacetime singularity). Using the Friedmann’s equation

if we have that

, the so-called weak energy condition, then

should have been reached at some finite time in the past! That is the “Big Bang” and EFE are “singular” there. There is no scape in the framework of GR. Thus, we need a quantum theory of gravity to solve this problem OR give up the FRW metric at the very early Universe by some other type of metric or structure.

Particles and the chemical equilibrium of the early Universe

Today, we have DIRECT evidence for the existence of a “thermal” equilibrium in the early Universe: the cosmic microwave background (CMB). The CMB is an isotropic, accurate and non-homogeneous (over certain scales) blackbody spectrum about

Then, we know that the early Universe was filled with a hot dieal gas in thermal equilibrium (a temperature

can be defined there) such as the energy density and pressure can be written in terms of this temperature. This temperature generates a distribution

. The number of phase space elements in

and where the RHS is due to the uncertainty principle. Using homogeneity, we get that, indeed,

, and where we can write the volume

. The energy density and the pressure are given by (natural units are used)

When we are in the thermal equilibrium at temperature T, we have the Bose-Einstein/Fermi-Dirac distribution

is for the Fermi-Dirac distribution (particles) and the

is for the Bose-Einstein distribution (particles). The number density, the energy density and the pressure are the following integrals

And now, we find some special cases of matter-energy for the above variables:

and the effective degrees of freedom are

in the DOF and the variables above is due to the relation between the Bose-Einstein and the Fermi-Dirac integral in d=3 space dimensions. In general d, the factor would be

Entropy conservation and the early Universe

The entropy in a comoving volume IS a conserved quantity IN THE THERMAL EQUILIBRIUM. Therefore, we have that

if we multiply by

and use the chain rule for

but it means that

is the entropy density defined by

Well, the fact is that we know that the entropy or more precisely the entropy density is the early Universe is dominated by relativistic particles ( this is “common knowledge” in the Stantard Cosmological Model, also called

It implies the evolution of temperature with the redshift in the following way:

Indeed, since we have that

is a convenient quantity that represents the “abundance” of decoupled particles.