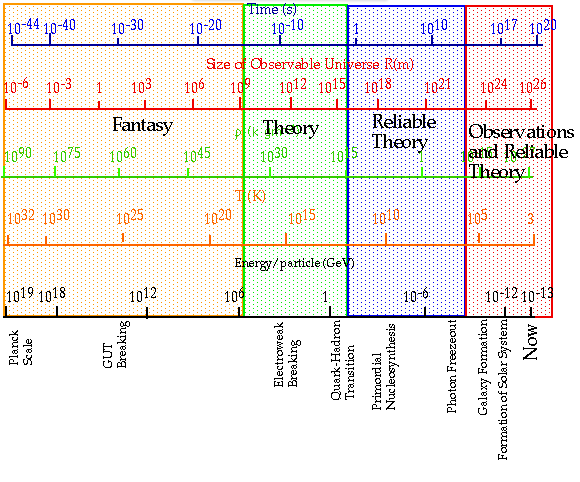 There are some easy rules for thermal equilibrium. The easiest one, is that coming from the “interaction rate”

. It can be expressed in the following way:

and then, at a given temperature T, we get

Moreover, we can understand roughly the so-called decoupling era:

1st. Any interaction mediated by a massless gauge boson provides

and this implies that

so the equilibrium temperature is found whenever

and this implies that

As a consequence, we can realize that the out-of-equilibrium phenomena in the early and current Universe are very important processes! In particular:

2) They provide the path of recombination of electrons and protons into hydrogen atoms.

3) They imply the  (likely) production of dark matter (or equivalently the presence of some kind of “modified gravity” or/and modified newtonian dynamics).

Boltzmann’s equation for annihilation of particles in equilibrium

There is a beautiful equation that condenses the previous physical process of equilibrium at a given temperature and the particle production it yields. Conceptually speaking, we have

and where the particle 1 is the one we are interested in. Then, we deduce that

where A is certain complicated facter involving “delta functions” of the energies and momenta of the particles 1,2,3,4 and an additional term depending on the statistics of the particle. Explicitly, it takes the form

is the Fermi-Dirac (FD, -)/Bose-Einstein (BE,+) distribution. In fact, the above FD/BE factors provide the so-called Pauli blocking/”Bose-Einstein” enhancement effects for the particle production in the processes

. Indeed, particle physics enter into the game here (see above formulae again) and we assume

Do you recognize the principle of detailed balance in this equation?

We can simplify the assumptions a little bit:

1st. The kinetic equilibrium is taken to be a rapid elastic scattering and we input the FD/BE statistics without loss of generality.

2nd. The annihilation in thermal equilibrium will be calculated from the sum of the chemical potential in any balanced equation.

? After a change of variable

is the “equilibrium number density” deducen from the expression

and then we finally get that

Now, we can define the thermally averaged cross section

The Boltzmann equation becomes with these conventions

Remark (I): LHS is similar to

and the RHS is similar to

Remark (II): If the reaction rate is