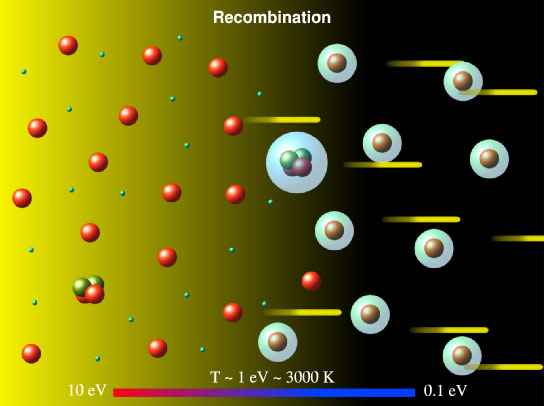 When the Universe cooled up to

Then, there were little hydrogen (H) and though

due to small baryon fraction

The evolution of the free electron fraction provided the ratio

and the second equality is due to the neutrality of our universe, i.e., to the fact that

(by charge conservation). If

remains in the thermal equilibrium, then

and the last equality is due to the fact we take

, we are out of the thermal equilibrium.

From the Boltzmann equation, we also get

, the ionization rate, and

the so-called recombination rate. It is taken the recombination to the n=2 state of the neutral hydrogen. Note that the ground state recombination is NOT relevant here since it produces an ionizing photon, which ionizes a neutral atom, and thus the net effect is zero. In fact, the above equations provide 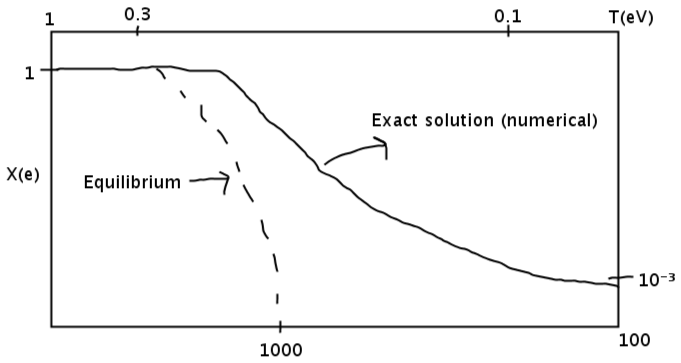 The decoupling of photons from the primordial plasma is explained as

Mathematicaly speaking, this fact implies that

is the Thomson cross section. For the processes we are interesting in, it gives

Thus, we deduce that

Today, we have strong evidences and hints that non-baryonic dark matter (DM) exists (otherwise, we should modify newtonian dynamics and or the gravitational law at large scales, but it seems that even if we do that, we require this dark matter stuff).

In fact, from cosmological observations (and some astrotronomical and astrophysical measurements) we get the value of the DM energy density

The most plausible candidate for DM are the Weakly Interacting Massive Particles (WIMPs, for short). Generic WIMP scenarios provide annihilations

is some “heavy” DM particle and the (ultra)weak interaction above produces light particles in form of leptons and antileptons, tighly couple to the cosmic plasma. The Boltzmann equation gives

Define the yield (or ratio)

. It is produced since generally we have

Now, we can introduce a new time variable, say

For a radiation dominated (RD) Universe,

In this case, we obtain

The final freeze out abundance is got in the limit

, and there, the yield drops exponentially

Moreover, the DM energy density can also be estimated:

The main (current favourite) candidate for WIMP particles are the so called lightest supersymmetric particles (LSP). However, there are other possible elections. For instance, Majorana neutrinos (or other sterile neutrino species), Z prime bosons, and other exotic particles. We observe that here there is a deep connection between particle physics, astrophysics and cosmology when we talk about the energy density and its total composition, from a fundamental viewpoint.

Remark: there are also WISP particles (Weakly Interacting Slim Particles), like (superlight) axions and other exotics that could contribute to the DM energy density and/or the “dark energy”/vacum energy that we observe today. There are many experiments searching for these particles in laboratories, colliders, DM detection experiments and astrophysical/cosmological observations (cosmic rays and other HEP phenomena are also investigated to that goal).