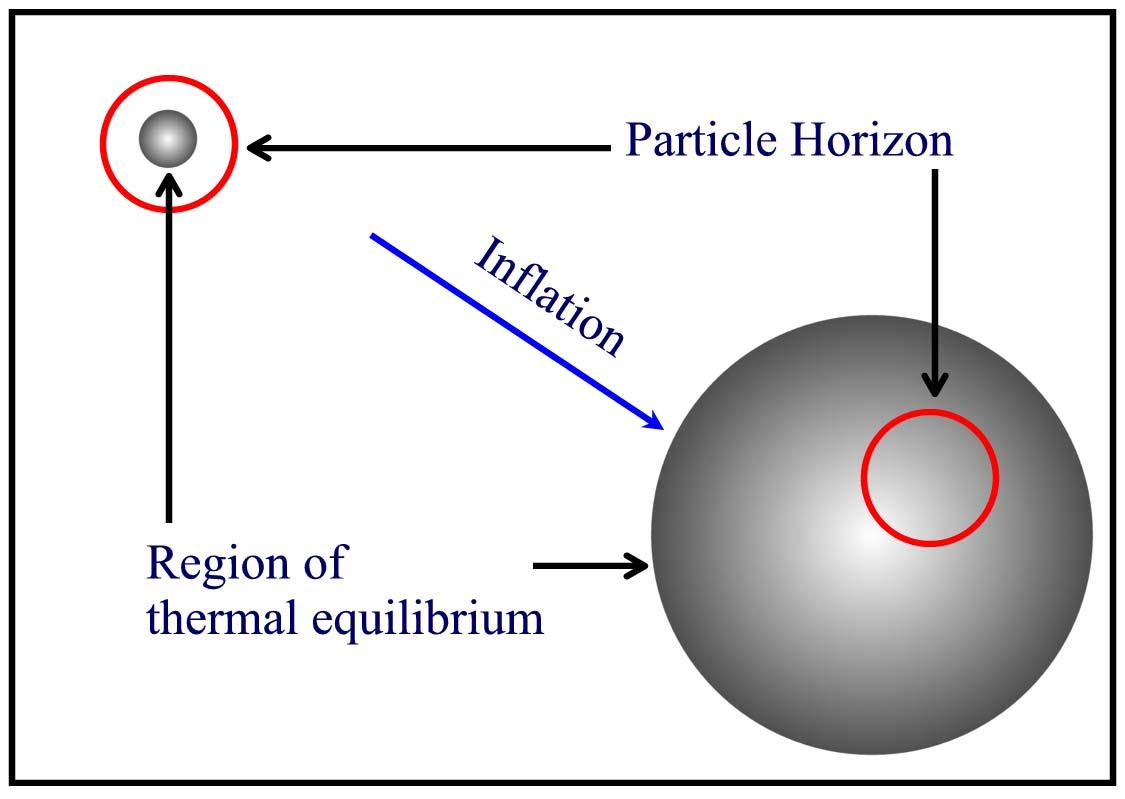 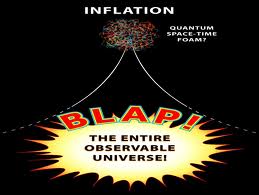 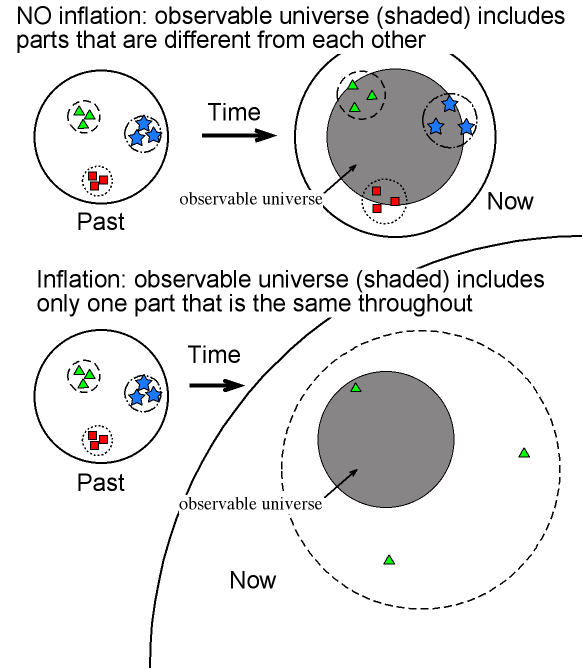 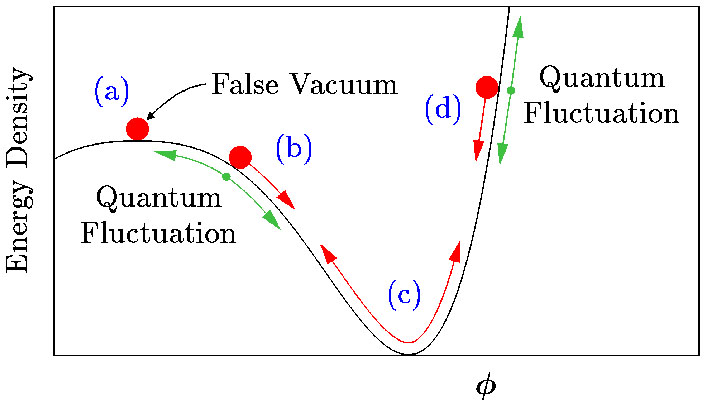 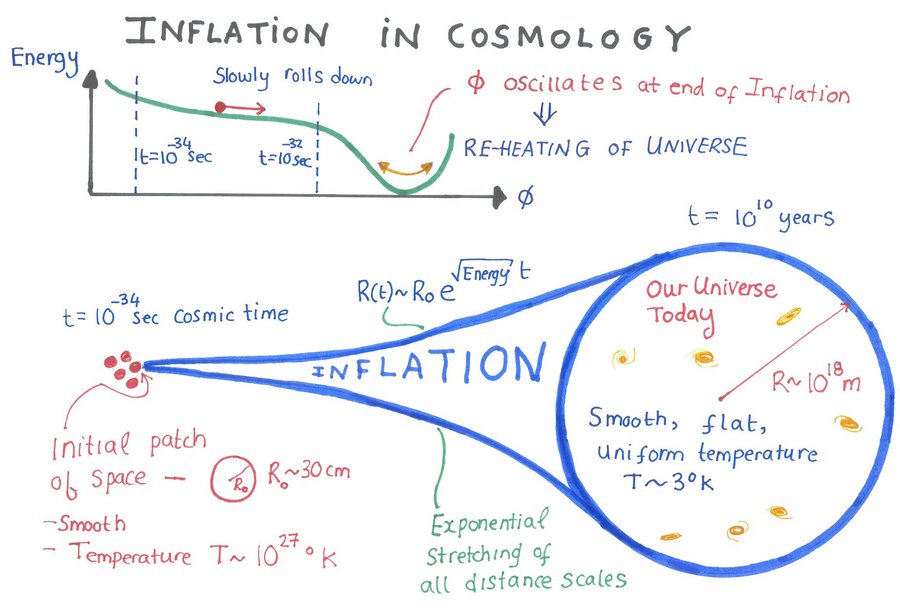 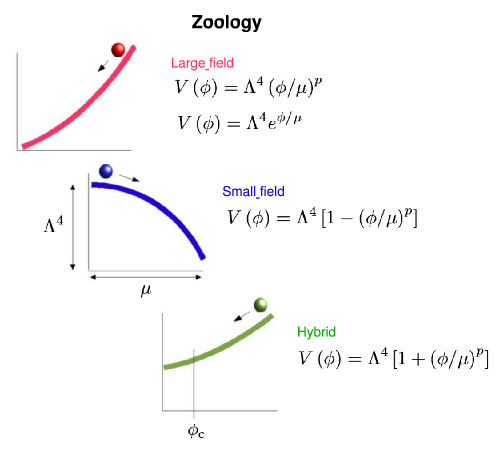 Despite the success of the Standard Cosmological model (or LCDM), today it is widely accepted that it is not complete, even if its main features and observables are known, there are some questions we can not understand in that framework.

Firstly, we have the horizon problem. For any comoving horizon, we obtain

for a MD Universe and to

for a RD Universe.

According to the CMB observations, today our Universe is very close to be isotropic, since the deviations are tiny

The issue, of course, is how can it be true?Recall that the largest scales observed today have entered theo horizon just recently, long after decoupling. Moreover, microscopic causal physics can not make it! So, where the above tiny anisotropy comes from? E.g., for a distant galaxy, we get

and this scale was outside the horizon in the past! Please, note that the entropy within a horizon volume is about

Another problem is the flatness problem. The physical radius of curvature is given by the term

When the primordial nucleosynthesis happened, about

, it gives the value

. This large mismatch means that the Big Bang Universe requires VERY SPECIAL initial conditions, otherwise the Universe would not be (apparently) flat as we observe at current time. Note that if

at Planck time, then there are two options:

Therefore, the natural time scale for cosmology is the Planck time (at least in the very early Universe and before)

. The current age of the Universe is about

An important, yet unsolved and terrific, problem is the cosmological constant problem. The vacuum energy we observe today (in the form of dark energy) is given by

i.e., the so called de Sitter space (dS) or de Sitter Universe. It is a maximally symmetric spacetime. In a dS Universe, we obtain

Observations provide (via dark energy) that

or so( even the mismatch can be 122 or 123 orders of magnitude!!!!). This problem is far beyond our current knowledge of QFT. It (likely) requires new physics or to rethink QFT and/or the observed value of the vacuum energy density. It is a hint that our understanding of the Universe is not complete.

One of the most “simple” and elegant solutions to the flatness problem and the horizon problem is the inflationary theory. What is inflation? Let me explain it here better. If the (early) Universe experienced an stage of “very fast” expansion, we can solve the horizon problem! However, there is a problem (you can call Houston if you want to…). If we do want a quick expansion in the early Universe, we need “negative pressure” to realize that scenario. Negative pressure can be obtained in an scalar field theory (there are some alternatives with a repulsive vector field and/or higher order tensors like a 3-form antisymmetric field, but the most simple solution is given by scalar fields).

The solution to the horizon problem in the inflationary theory proceeds as follows. Firstly, for the comoving horizon, we get

, and it is encoded into the fraction

We have to make a distinction of the comoving horizon

and the comoving Hubble radius

. If we observe two particles whose comoving distance is r, then

, we can never have a communication between those particles.

, then we can never communicate NOW using those two particles.

It shows that it is possible to have

ca not communicate today BUT they could be in causal contact early on. We only need that

get contributions mostly from early epochs. Indeed, both in RD (Radiation Dominated) and MD(Matter Dominated) Universes,

increase with time, so the latter epoch contributions dominate over cosmological time scales. Then, a solution for the horizon problem is that in the early Universe, in this “inflationary” (very fast) phase, for at least a brief amount of time (how much is not clear) the comoving Hubble radius DECREASED.

How can the scale factor evolve in order to solve the horizon problem?We do know that

i.e., we get an (positively) accelerating expansion or “inflation”.

How can we understand quantitatively inflation? Firstly, suppose that the energy scale of inflation is about

. It is about the Grand Unified Theory (GUT) energy scale, and close to the Quantum Gravity scale (the Planck scale) about

. Obviously, it only matters at very high energies, very short distances or very tiny time scales after the Big Bang. Then,

For a RD Universe,

During the inflation, the comoving Hubble radius had to decrease by, at least, 28 orders of magnitude. The most common way to build such inflationary model is to build a model where

is the time when inflation ends. In fact, we obtain that

can be guessed from the so-called “e-folds”, or exponential factors, in a very simple way: note that

Remark: The comoving horizon is very similar to an effective time parameter!

In order to allow inflation, we require that the “weak energy condition” be violated. That is, we ask that (for inflation to be possible)

Obviously, there is no particle/field in the Standard Model (at least until the discovery of the Higgs field in 2012) able to do that. So, if inflation happened, it is an unknown field/particle responsible for it! The simplest implementation of inflation uses, as we said before, some scalar field

. Let us define a scalar field

. Its lagrangian is generally given by

Negative pressure is obtained whenever we have

1st. A scalar field with negative pressure is trapped into a “false vacuum”.

2nd. A scalar field “slow-rolling” toward its true vacuum provides a simple model for inflation.

(slow varying in time as a scalar function!). The time variable

and it becomes negative during the inflationary phase! The slow-roll parameters

where the dot means derivative with respect to

. Moreover, we also get

for RD Universes imply that

is a definition of inflationary phase!

For any scalar field, and the pressure and energy density given above, we can calculate the

In the case that the kinetic term is negligible, we obtain the dark energy fluid value

. However, this equation is much more general. If we have a slow-rolling scalar field over cosmological times (a very slowly time dependent scalar field) it could mimic the cosmological constant behaviour ( we are ignoring some technical problems here). If the kinetic term is NOT negligible, the

value can differ from the standard value of

and as “phantom energy” if

. Both, dark energy, quintessence or phantom energy models can affect to the future of the Universe. Instead of a Big Freeze (the thermal death of the Universe), the scalar dominated Universe can even destroy atoms/matter/galaxies at some point in the future (at least on very general grounds) and terminate the Universe in a Big (or Little) Rip. Thus, let me review the possible destinies of the Universe according to modern Cosmology:

1) Big Crunch (or recollapse of the Universe). The Universe recollapses until the initial singularity after some time, if it is massive enough. Current observations don’t favour this case.

2) Big Freeze (or thermal death of the Universe). The Universe expands forever cooling itself until it reaches a temperature close to the absolute zero. It was believed that it was the only possible option with the given curvature until the discovery of dark energy in 1998.

3) Big Rip (or Little Rip, depending on the nature of the scalar field and the concrete model). Vacuum energy expands the Universe with an increasing rate until it “rips” even fundamental particles/atoms/matter and galaxies apart from  eath other. It is a new possibility due to the existence of scalar fields and/or dark energy, a mysterious energy that makes the Universe expands with an increasing rate overcoming the gravitational pull of galaxies and clusters!