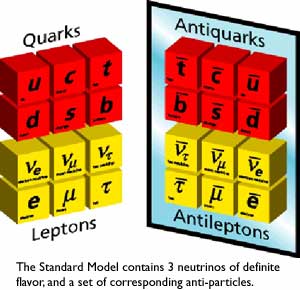 The current Standard Model of elementary particles and interactions supposes the existence of 3 neutrino species or flavors. They are neutral, upper components of “doublets”

with respect to the

group, the weak interaction group after the electroweak symmetry breaking, and we have:

These doublets have the 3rd component of the weak isospin

and they are assigned an unit of the global

lepton number. Thus, we have electron, muon or tau lepton numbers. The 3 right-handed charged leptons have however no counterparts in the neutrino sector, and they transform as singlets with respect to the weak interaction. That is, there are no right-handed neutrinos in the SM, we have only left-handed neutrinos. Neutrinos are “vampires” and, at least at low energies (those we have explored till now), they have only one “mirror” face: the left-handed part of the helicities. No observed neutrino has shown to be right-handed.

Beyond mass and charge assignments and their oddities, in any other respect, neutrinos are very well behaved particles within the SM framework and some figures and facts are unambiguosly known about them. The LEP Z boson line-shape measurements imply tat there are only 3 ordinary/light (weakly interacting) neutrinos.

The Big Bang Nucleosynthesis (BBN) constrains the parameters of possible additional “sterile” neutrinos, non-weak interacting or those which interact and are produced only my mixing. All the existing data on the weak interaction processes and reactions in which neutrinos take part are perfectly described by the SM charged-current (CC) and neutral-current (NC) lagrangians:

are the neutral and charged massive vector bosons of the weak interaction. The CC and NC interaction lagrangians conserve 3 total additive quantum numbers: the lepton numbers

, while the structure of the CC interactions is what determine the notion of flavor neutrinos

There are no hints (yet) in favor of the violation of the conservation of these (global) lepton numbers in weak interactions and this fact provides very strong bound on brancing ratios of rare, lepton number violating reactions. For instance (even when the next data is not completely updated), we generally have (up to a 90% of confidence level, C.L.):

As we can observe, these lepton number violating reactions, if they exist, are very weird. From the theoretical viewpoint, in the minimal extension of the SM where the right-handed neutrinos are introduced and the neutrino gets a mass, the branching ratio of the

decay is given by (2 flavor mixing only is assumed):

are the neutrino masses,

is the W boson mass and

is the mixing angle of their respective neutrino flavors in the lepton sector. Using the experimental upper bound on the heaviest neutrino (believed to be

without loss of generality), we obtain that

Thus, we get a value far from being measurable at present time as we can observe by direct comparison with the above experimental results!!!

In fact, the transition

and similar reactions are very sensitive to new physics, and particularly, to new particles NOT contained in the current description of the Standard Model. However, the R value is quite “model-dependent” and it could change by several orders of magnitude if we modify the neutrino sector introducing some extra number of “heavy”/”superheavy” neutrinos.

See you in another Neutrinology post! May the neutrinos be with you until then!