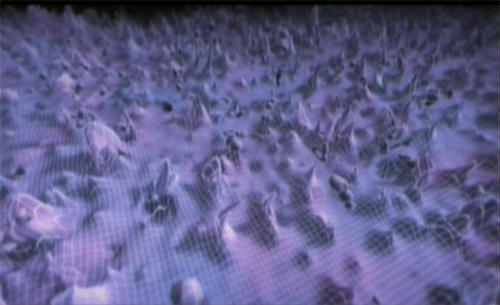 Some conclusions of this fascinating subject and thread about the mythical spacetime foam:

(1) CDM(Cold Dark Matter) and MOND seems to be complementary descriptions of the same dynamics and phenomenology.

(2) MOND force law works at galactic scales. This can be understood as a “proof” or manifestation of Dark Matter existence at certain scales, but it also implies a novel dynamics and new physics.

That is, at large distances, when the acceleration IS smaller than the critical acceleration

, there is a modificacion of inertia (MOND case), where

In the low acceleration limit, we get

This is the Tully-Fisher relationship for spiral galaxies! We have got

experimentally. The alternative to this explanation would be a modification of gravity with similar behaviour. But that modification is not easy or trivial in the framework of field theory!

(4) A Born-Infeld inspired gravity, with

per degree of freedom seems to do the role of a MOND dark matter theory at low temperatures.

(5) The BIT gravity approach depends on a unique statistic with (quantum!) Boltzmann statistics and partition function, that is, it seems that BIT gravity satisfies infinite statistics (a Cuntz algebra) with

(7) The need for infinite statistics is due to the fact that it could capture the microscopic quantum dynamics of gravity! That is, gravitons/gravitational degrees of freedom could secretly obey infinite statistics. Infinite statistics is both non-local and non polynomial (nonlinear) in the field variables. It could also shed light on the issue of the BH information paradox and the firewall problem.

The quon algebra (q-deformed Heisenberg algebra) is some kind of interpolation between bosons and fermions. Infinite statistics is also named Cuntz algebra.

(11) Despite (9) and (10), TCP and the cluster decomposition theorem holds in infinite statistics.

(13) Global physics through the cosmological constant

and local dynamics of gravity at

are connected somehow due to Quantum Gravity.

(14) Quantum fluctuations of spacetime implies that the spacetime fluctuation scales as the cubic root of distances.

(16) The spacetime foam idea has consequences for Cosmology and Astrophysics. Indeed, it points out to Dark Matter and Dark Energy!

(17) Holofoam/Holographic foam: dark energy is dynamical but it has very long wavelength, and this is why we can not detect it up to large scales.

(19) Dark matter/Dark energy transitions (the dark or hidden portal) could have radical consequences: decelerating-accelerating changes in the cosmic expansion. We need to study the dark portal and Dark Energy/Dark Matter “interactions”.

(21) CDM-MOND crossover/transition should be better understood. That could be the key to quantum gravity.

(23) Spacetime foam “predicts” that the speed of light could “fluctuate”. This has a cumulative effect on the travel time

However, this effect is (yet!) too small to be detectable. Future telescopes like the VLTI could resolve this issue. In fact, Fermi+GRST rules out

only! The holographic foam hypothesis “predicts” that

. It gives a time shift

. It yields fluctuations in the speed of light! Indeed, we get

is the time of flight for the photon. Note that

varies randomonly! In fact, time differences do not add coherently and then, the naive result

is a wrong calculation. The correct result is

This last calculation shows that cumulative effects of spacetime fluctuations are important in order to consider coherence loss in photon propagation.

parts add up to

for the distance L starting with

. Thus, the cumulative effect or factor is proportional to the cubic root of the number of intervals, i.e.,

(25) The random walk model for spacetime is ruled out by phenomenology but the holographic foam model is not ruled out yet. Stay tuned!