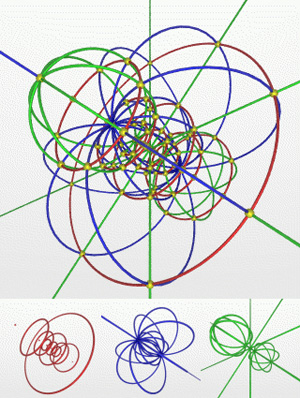 In this short post, I am going to name some wonderful exotic “atoms” and/or bound states (molecules). Some of them are well known for all of you. Others, maybe they are not.

Firstly, I will state the particle species I am going to use (up to their respective antiparticles, if any):

11) Quarkonium or the single quark-antiquark molecule or

. Note that QCD allows for multiquark

. More general non-perturbative approaches, like the QCD approach, would allow us to introduce W-ball states and exotica like

. Similarly to the previous case, we could also wonder if exotica like the following would arise non-perturbatively in our theories:

molecules, i.e., matter made purely from neutrons (sometimes dubbed degenerated neutron matter, like the one in neutron stars).

. Also, with N neutron-antineutron pairs, we could have

16) Photonium or photonic molecules. Likely, it could be imagined like the Fock state of the photon:

17) Gluonium (glueballs) molecules. QCD predicts states made from pure gluons only. Similarly to the photonic molecule, we would get:

but we could also obtain exotica adding quark-antiquark states, and other colorless multiquark states bounded to some number of gluons!

18) Gravitonium (gravitonic balls) molecules. Even when the quantum theory of gravity is completely unknown yet, we would expect that non-perturbative effect will allow for pure multigraviton “condensed” states, i.e.,

20) Neutroflavorium molecules, or neutral molecules with several flavors that are flavorless, e.g., states like

,… Of course, some of them could be not possible with Feynman rules at hand ;).

21) Computronium, or programmable matter. Speculative matter fundamental at informational realm that can be transformed into anything it can be computed. Also, it is a substrate for computer modeling of virtually any real object.

I could include colorflavorium molecules as well, but at current time, any particle is “colorless”, so I give up this option. I have no knowledge of any study of gravitonia (gravitonium molecules) in the quantum gravity approaches I have studied so far, but I believe it is an interesting topic! It shares some resemblance to the Bose-Einstein condensation subject as well.

Did you like this uncommon list? Would you know how to calculate the spectrum of all of them? Of course the spectra of some of these objects can be got “a la Bohr”, others are not known (to my knowledge) from first principles.