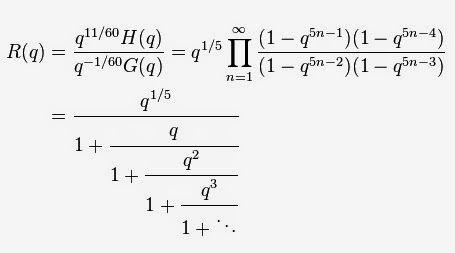 There are some cool identities, very well known to mathematicians and some theoretical physicists or chemists, related with Ramanujan. They are commonly referred as Rogers-Ramanujan identities (Rogers, 1894; Ramanujan 1913,1917 and Rogers and Ramanujan, 1919). They are related to some objects called basic hypergeometric functions, some q-analogues of the classical hypergeometric functions that some people study in calculus and the theory of special functions. We write them as follows:

are modular functions of

. These identities arise in some places of superstring theory, and in the hard hexagon model of statistical mechanics. Moreover, they are the key ingredients to derive the Ramanujan’s continued fraction

May Ramanujan be with you!