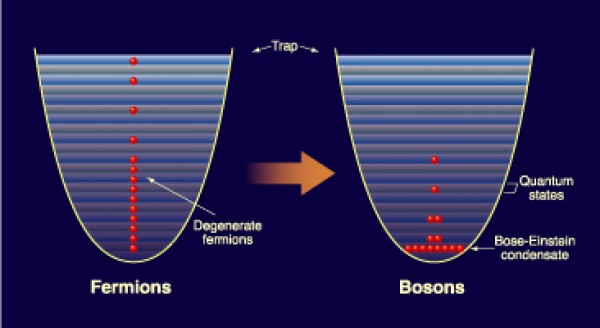 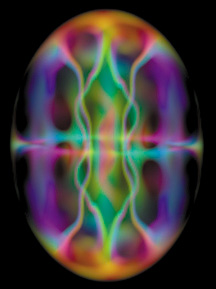 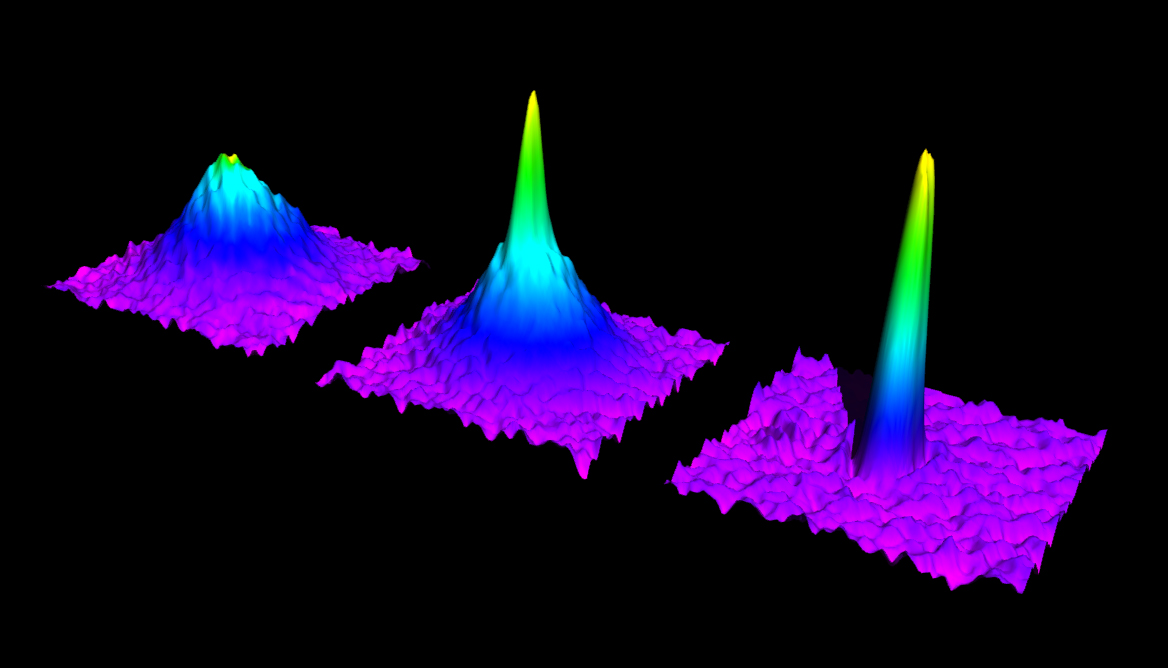 Let me begin this article in D=d+1 spacetime. We are going to study quantum gases and their statistics in multidimensional space. Usual notation:

In D=d+1 spacetime, the massless free ideal relativistic gas satisfies, as we will show, certain relations between thermodinamical variables. For instance,

if the dispersion relationship is

and the energy density

Generally, we will work with natural units

(they will be reintroduced if necessary) and with zero chemical potentical

and massless particles. We will explore the issue of massive particle statistics though.

for the solid angle

For a dispersion relationship

in d-dimensional space, we have

gives us the Stefan-Boltzmann law in higher dimensions

We are ready to study the phenomenon of Bose-Einstein condensation (BEC) for ideal massive (relativistic and non-relativistic) bosonic gases. Take the dispersion relation to be now

The critical temperature of the BEC,

. The number density will be then

In 3d we get the known result

where we have used

In the case of the ultrarelativistic (massless, almost massless) case, we obtain

In the 3d case, we get the very well result

The 2d UR case HAS a critical temperature (unlike the 2d non-relativistic case, where BEC does NOT exist)

. Indeed, you can easily check that

BEC does depend not only on the number of dimensions but also on the density of states, i.e., it is highly dependent on the dispersion relationship

An additional important issue is the following. If we allow

can be created. In particular, we have that

for each particle. Moreover, you have

with + for bosons and – for antibosons, so

, as we would expect.

. Then, the critical temperature DOES change to take into account the boson-antiboson pair creation. It yields

Note that the UR boson-antiboson massive case is not equal to the UR boson (massless) case, even in 3d! Indeed, you find that

In fact, with no antiboson (massless), the case provides the following thermodynamical quantities:

When antibosons are present, these integrals become nastier and more complicated:

Take the density of states

and take the UR limit to get and prove

and calculate/check the critical temperature

obtaining the value of the “constant”

and the Fermi energy reads (

The dimensional Fermi weights are, for D=d+1 dimensional spacetime and the NR and UR case

and the energy in terms of Fermi quantities reads

and the density of states

Thus, the energy density will be

with the thermal wavelength

is the fugacity. The Fermi function reads

and it uses the polylogarithm as well!!! Wonderful, isn’t it? The average energy per fermion in d-space is

and you also have

and the number density

The Casimir energy of such a bosonic field requires

and the regularized energy in vacuum has to be

and it shows that the Riemann zeta functional equation

This striking consequence and relationship between the vacuum structure and pure mathematics is fascinating and not yet completely understood. But this will be a topic for a future discussion here.