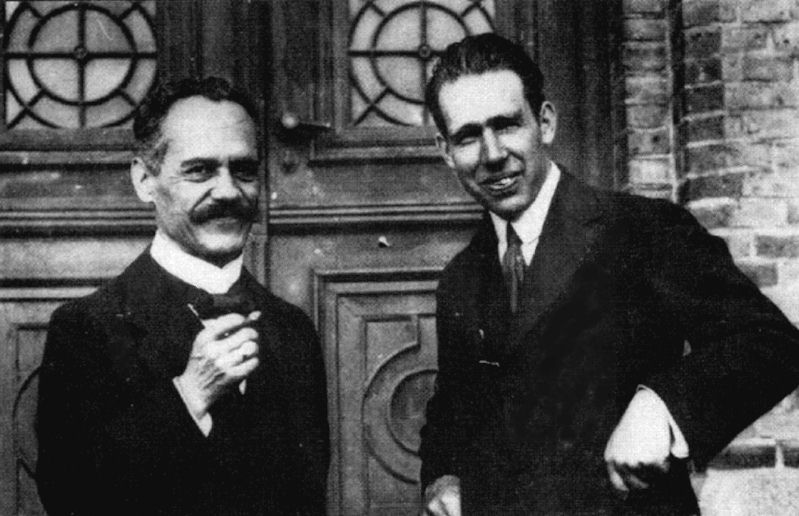 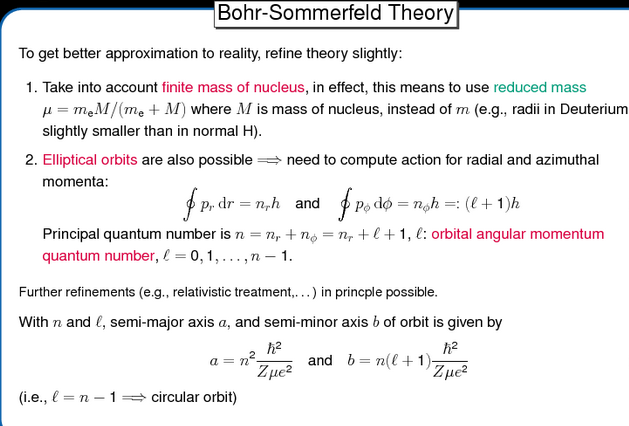 Old (old fashioned!) Quantum Mechanics is understood as the quantum theory before its final formulation around 1927-1931…It includes the Bohr model, the Wilson-Bohr-Sommerfeld quantization and some other tricks like the one to take into account the finite nuclear size. For finite nuclear mass (not infinite), considering it as fixed, the hypothesis implies that (M is the nuclear mass and m is the electron mass around the nucle-we take the hydrogenic one single electron atom for simplicity) thre reduced mass will be:

Compare this equation with the association of two electrical resistances (or inductances) in parallel (exactly with the same formal expression) or two capacitors in series! Simple and neat/clear analogy!

Following the Bohr model of the hydrogen atom and its success (today we know it was only partial) to explain the hydrogen spectrum, people began to study if it could be generalized to atoms with higher atomic number. Even Bohr himself tried to solve the issue…Bohr’s formula and model had worked well to give the previously known Rydberg for the hydrogen atom, but it was not known then if it would also give spectra for other elements with higher Z numbers, or even precisely what the Z numbers (in terms of charge) for heavier elements were.

It was known that he ordering of atoms in the periodic table did tend to be according to atomic weights or mass, but there were a few famous “reversed” cases where the periodic table demanded that an element with a higher atomic weight (such as cobalt at weight 58.9) nevertheless be placed at a lower position (Z=27), before an element like nickel (with a lower atomic weight of 58.7), which the table demanded take the higher position at Z=28. Moseley inquired if Bohr thought that the electromagnetic emission spectra of cobalt and nickel would follow their ordering by weight, or by their periodic table position (atomic number, Z), and Bohr said it would certainly be by Z. Moseley’s reply was “We shall see!”

Since the spectral emissions for high Z elements would be in the soft X-ray range (easily absorbed in air), Moseley was required to use vacuum tube techniques to measure them. Using X-ray diffracton techniques in 1913-1914, Moseley found that the most intense short-wavelenght line in the x-ray spectrum of a particular element was indeed related to the element’s periodic table atomic number, Z.

This line was known as the so-called K-alpha line. Following Bohr’s lead, Moseley found that this relationship could be expressed by a simple formula, later called Moseley’s Law. Mathematically:

Moseley’s two given formulae for K-alpha and L-alpha lines, in his original semi-Rydberg style notion were derived to be:

The energy of photons that a hydrogen atom can emit in the Bohr deduction of the Rydberg formula  is given by the difference of any two hydrogen energy levels:

For the hydrogen atom, the quantity of charge reads

because Z (the nuclear positive charge, in fundamental units of the electron charge is essentially Q=Ne) is equal to 1. That is, the hydrogen nucleus contains a single charge. However, for the hydrogenic atoms (those in which the electron acts as though it circles a single structure with effective charge Z), Bohr realized from his derivation that an extra quantity would need to be added to the conventional charge to the fourth power, in order to account for the extra pull on the electron, and thus the extra energy between levels, as a result of the increased nuclear charge. In 1914 it was realized that Moseley’s formula could be adapted from Bohr’s, if two assumptions were made:

1st. The electron responsible for the brightest spectral line (K-alpha) which Moseley was investigating from each element, results from a transition by a single electron between the K and L shells of the atom (i.e., from the nearest to the nucleus and the one next farthest out), with energy quantum numbers corresponding to 1 and 2.

2nd. The Z in Bohr’s formula, though still squared, required a reduction by 1 to calculate K-alpha. This effect arises because the initial and final states of the atom have different amounts of electron-electron repulsion. A widespread oversimplification is the idea that the effective charge of the nucleus decreases by 1 when it is being screened by an unpaired electron. In any case, Bohr’s formula for Moseley’s K-alpha X-ray transitions became:

In the case with the transition with initial n=1 and final n=2, dividing both sides by h to convert energy to frequency, we get:

The final value of the theoretical frequency

is in good agreement with Moseley’s empirically-derived value. This fundamental frequency is the same as that of the hydrogen Lyman-alpha line, because the 1s to 2p transition in hydrogen is responsible for both Lyman-alpha lines in the hydrogen atom, and also the K-alpha lines in X-ray spectroscopy for elements beyond hydrogen, which are described by Moseley’s law. Moseley was indeed fully aware that his fundamental frequency was Lyman-alpha, the fundamental Rydberg frequency resulting from two fundamental atomic energies, and for this reason differing by the Rydberg-Bohr factor of exactly 3/4, and he explicitly showed it clearly in his original papers.

As regards Moseley’s L-alpha transitions in relation with current modern Quantum Mechanics, the modern view associates electron shells with principle quantum numbers n, with each shell containing two times n squared electrons, giving the n=1 shell of atoms 2 electrons, and the n=2 shell 8 provides electrons. The empirical value of 7.4 for Moseley’s second K is thus associated with n=2 to n=3, then called L-alpha transitions (not to be confused with Lyman-alpha transitions), and occurring from the “M to L” shells in Bohr’s later notation. This value of 7.4 is now known to represent an electron screening effect for a fraction (specifically 0.74) of the total of 10 electrons contained in what we now know to be the n=1 and n=2 (or K and L) “shells”.

What else? The theory of special relativity!!!!! Considerations from the special theory of relativity implied that the circular orbits of the electron in the atom should be considered an approximation. Just as it happens with the elliptical orbits in the solar system. Circles are a particle type of ellipse. That is how Wilson, Bohr and Sommerfeld, with the aid of some ideas of classical mechanics and the special theory of relativity, arrived to a more general quantization rule. Mathematically speaking, it reads

for some “periodic” curve C. Classical Bohr quantization can be read off from this rule. Take a periodic orbit be a circle with angular moment L. The Wilson-Bohr-Sommerfeld above is a quantization of the action-angle variable (p,q) to be

However, the power of Wilson-Bohr-Sommerfeld ideas is that we can go beyond Bohr’s model. For simple harmonic motion, we obtain, from classical mechanics

Thus, we have arrived to

but this is the Einstein’s and Planck’s quantization rule for harmonic oscillators/quanta of “light” (or more generally bosons).

Finally, our third example of Wilson-Bohr-Sommerfeld quantization rule. A free particle in a box. Firstly we consider the unidimensional (D=1) box with length equal to L. The action-angle variable is

Thus, we have that

1st. Massive non-relativistic particle. We have

Energy is quantized, so linear momentum is also quantized

Remarkably, this quantized momentum also appear in Kaluza-Klein theories when you use dimensional reduction of a periodic extra space-like dimension of size pi times L!

The momentum is also quantized too

Remark: in natural units (c=1), up to a numerical 2 (1/2) factor, this is the same momentum as the previous case! The energy spectrum differs from the presence of mass, a number AND the power in the Planck constant and n. Of course, it coincides with the KK quantization for a periodic space-like extra dimension!

From this, we get a rest mass shifted quantized relativistic momentum

You only have to take D different angle-action variables and mimic the procedure. For a non-relativistic massive particle you will have

For the massless relativistic D-dimensional case you have

and the massive relativistic D-dimensional case

Tired of boring point particle spectra? Go to superstring theory!!!!!! We have already seen that a single particle in a box (Am I a mad man with a box????? LoL) of size L has the spectrum

where I am using natural units right now. Note that when L goes to zero the energy diverges! Thus, finite energy states is n=0 only and that does NOT depend on the box size L at all! Going into D spacetime dimensions ambient, if you reduce dimensionally the theory and compactify k extra space-like dimensions, you can only get D-k non compact dimensions AND possible zero modes. That is, fields can only, at least in principle from this framework, propagate along D-k non compact dimensions (today, current modern theories can do this better and this feature depends on the particular model building of your theory, i.e., you can guess theories with fields propagating not only in the non compact space, the brane, but also into the compact space-that can be LARGE- or in the bulk; these are commonly referred as brane-worlds). In summary, small dimensions probe energies greater than 1/L, not lesser. Moreover, closed strings (loops!) have an intersting spectra:

where the last two terms are purely stringy from the winding modes and the harmonic oscillator excitations of the string (they can possible include a zero point contributions). By the other hand, open strings have the spectrum

There are no winding modes in the open string spectrum. Indeed, a quite mysterious remark was that even when open strings DO contain closed strings as excitations, in a dual picture there is no empty space. It was discovered that a hidden extended object, with p=D-k-1 spatial components, is linving in the edges of the open string. These objects are D-branes (from Dirichlet boundary conditions) or Dp-branes (D-k-1=p-membrane or p-brane)! The role of these new objects in the theory formerly known as superstring theory is very striking and surprising. Indeed, there are cool mathematical objects involving their dualities. We have seen above that T-duality exchange the roles of winding modes and KK modes, and much more interestingly, relates a compactified space with size L with another of 1/L is suitable units. So, somehow, large and small quantities are not differnt from the viewpoint of T-duality and the related theories! That is a very strange result and indeed has nothing to do with common experience. But it is true and a solid result in superstring theory, now completely established. Very small and very big things are related with T-duality. What else? S-duality!!!!! But before talking about S-duality, we will go back in time to the early times of quantum physics, and we will met the thoughts of a guy called Paul A. M. Dirac…