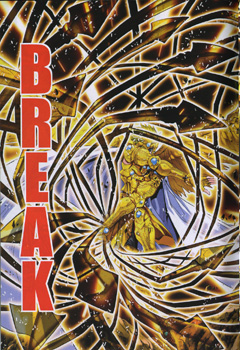 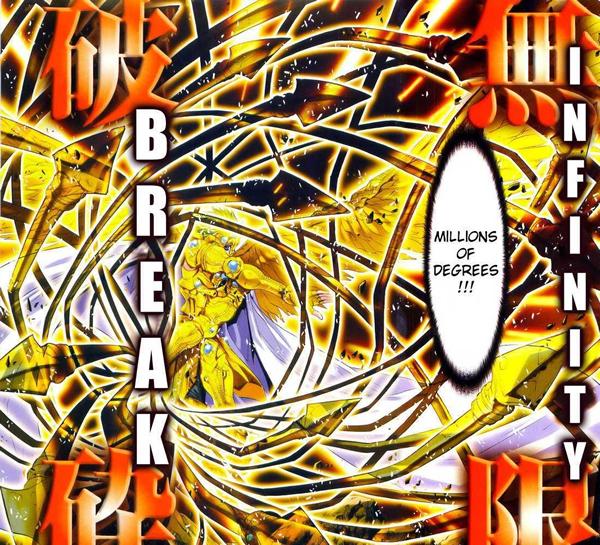 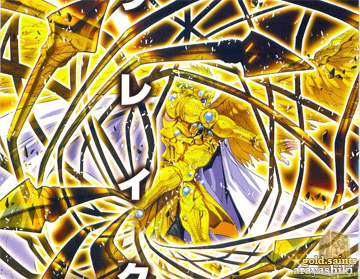 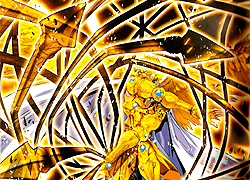 This post contains some exercises and challenges for you. In fact, crazy me, I used some of them for my classroom usage (just a fun way to survive is to design and propose maniac ultrageek problems to your students, don’t you think so? A mad scientist I am…). Before going into the problems, let me summarize some useful quantities we saw in the last post http://www.thespectrumofriemannium.com/2015/07/19/log174-basic-black-hole-physics/

), non-rotating, uncharged and in 4 space-time dimensions without cosmological constant:

2) Area of the Schwarzschild’s black hole:

8) BH temperature, for even the classical non-rotating Schwarzschild black hole, is given by the Hawking result:

9) BH entropy for the 4D Schwarzschild:

Sagittarius Aiolos (射手座のアイオロス, Sajitariasu no Aiorosu) is one of the Gold Saints from the anime/manga franchise Saint Seiya. The Infinity Break (infiniti bureiku) is his most powerful  technique and it allows Aiolos to shoot an infinite number of light darts that pierce anything upon contact. With this attack, Aiolos destroyed Horus’ army (Ra’s army) in Saint Seiya: Episode G, with a single hit. According to Aiolos himself, at the moment he uses the Infinite Break, his Cosmo reaches a million of (absolute?) degrees. Supposing he refers to absolute (kelvin) degrees, you are asked to respond the following questions:

1) Calculate the average electron velocity of the atoms forming Aiolos when his Cosmo reaches that million of (absolute) degrees. Compare this average velocity with the typical velocity of a cathode tube electron, a fast neutron and the typical atomic unit of velocity in the hydrogen atom. What would the mass of certain hypothetical black hole whose Hawking temperature were 1 million of kelvin degrees? Obtain the radius, black hole entropy, horizon area, surface gravity, surface tidal acceleration, the black hole luminosity at the event horizon, and the evaporation time for the equivalent black hole. Compare the calculated BH mass with the known masses of Earth’s moon, the sun, Phobos, Hydra and Pluto. Some useful data: m(electron)=

2) Some Zodiac warriors can use the opposite technique: cold freezing attacks! Some knights are able to slow down the atomic/subatomic motion using their Cosmo in order to get glacial strokes! Some examples are Camus, Hyoga or Suykyo. Suppose we do believe in classical canon and that bronze, silver, and gold cloths freeze out at -150ºC, -200ºC and -273.15ºC. Calculate the average electron velocity for the atoms with those 3 temperatures. What would the black hole mass associated to those temperatures?

3) At current time, we do know that the absolute zero can not be reached due to quantum effects (if you want to keep yourself a classical field, think about the third law of thermodynamics instead). That is, no matter how Gold Saint you are, it is impossible at the current state-of-art (and likely in the forthcoming future!) to reach EXACTLY the absolute zero. However, we can approach the absolute zero as close as we want in principle and it explains the anime/mange physics somehow…Having the right tools (you need something better than a home freezer to do it)! (Or in the anime/manga having trained hard enough to low your temperature more than your enemy/rival). It means, being geek and classical with the canon, that if we are able to slow down our molecular, atomic and subatomic motion, with our Cosmo, more than our rival, we will beat the rival and win! Then, calculate the average electron velocity in the following cases: T=100 pK (picokelvin), T=1 pK, T=1fK, T=1zK and T=yK. Compare these temperatures with the Hawking temperatures of black holes having 1, 10, 10000, 1000000, 100 million of solar masses. Comment the results. Data: the solar mass is

4) (Advanced) Suppose Aiolos is training to be able to increase his cosmo temperature up to even larger  incredible values. We will study two cases: A) 2 TK (terakelvin, typical scale of quark-gluon plasma), and B) 1 YK (yottakelvin)! Firstly, compare the average electron velocity with the speed of light and deduce if it is a relativistic electron (Hint: calculate the relativistic beta and gamma factors for E=1YK). Calculate the black hole mass and black hole remaining parameters associated to this temperature. Compare them with the associated Planck mass and Planck units. Comment the obtained results. Finally, suppose that no new physical laws appear below the Planck scale. What would the electron velocity be at Planck temperature? Calculate the mass, entropy and physical quantities for a BH with Planck temperature. Calculate the temperature, entropy and physical quantities of a BH with Planck energy and compare the three cases.

5) (Advanced) Suppose some known particles, e.g., the electron, the neutron, the proton, the muon, the tau particle, the top quark and the Higgs boson were tiny black holes. Suppose their masses are effectively described by its PDG value. Calculate the physical parameters of the associated microscopic black holes (temperature, entropy, horizon radius, surface gravity,…). Comment the results.

EXTRA BONUS (Medium difficulty-> Black Hole music): find how many octaves below or above middle C are the frequencies associated to all the given above previous BH (Hint: express the BH masses in Hz, then think about Do frequency in Hz and apply the octave scale for comparison).

EXTRA BONUS (Advanced+hard-> Beyond Schwarzschild BHs): Schwarzschild BHs are not the only Black Hole solution to Einstein Field Equations of General Relativity. A Kerr-Newman-de Sitter (KNdS) black hole is a BH having angular momentum, electric (even magnetic!) charge, and a non null cosmological constant. One subtle aspect of this class of BH is that it owns several horizons. For instance, the particle and cosmological generalized BH temperatures are given by the expressions:

are. Plug in the gravitational constant, the speed of light, the Coulomb constant and the cosmological constant in the above expressions to get the complete dimensionally correct temperature (times the Boltzmann constant, of course).

? In what asymptotic limit you get the KN solution without cosmological constant?

iii) Check that the temperatures

can be rewritten as follows:

iv) What is the effect of angular momentum, electric (magnetic) charge and the cosmological constant and their associated generalized BH temperature with respect to the usual Schwarzschild solution? If a Saint Seiya character managed to tune not only his molecular, atomic, subatomic motion but also his/her angular momentum, charge and cosmological constant, would it favor or make it harder to approach a given temperature T? Reason your answers.

P.S. (II): Beyond Saint Seiya, this exercise can be exported to any other anime/manga facing black hole/temperature powers. For instance, One Piece. The Yami Yami no Mi devil fruit caused this quote

“Darkness is gravity! The power to pull everything in… and spare not even a ray of light!… Infinite gravity!” Marshall D. Teach

From the One Piece wiki, we read: “(…)The first and foremost strength, as demonstrated by BlackBeard (Marshall D. Teach) is that it allows the user to control darkness and its unique property of gravity. The darkness is visually demonstrated by a black smoke-like substance spreading out from the user’s body. The darkness is a void that devours and crushes everything. Due to this, the user can absorb physical matter and attacks of any type by sucking it into the darkness. The user can also use this ability to irresistibly pull the opponent to them, regardless of their current state. Similar to a BH, the user can absorb things inside a vortex. It seems that it does not completely compress and annihilate that which is sucked in as an actual black hole would do, but rather creates some form of space where things are stored. (…)”

Thus, you can rewrite the whole exercises in terms of One Piece stuff if you wish, of course knowing what Paramecia, Zoan and Logia Devil Fruits are ;). 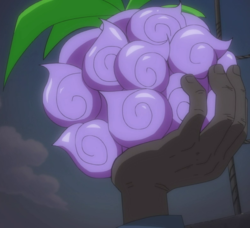 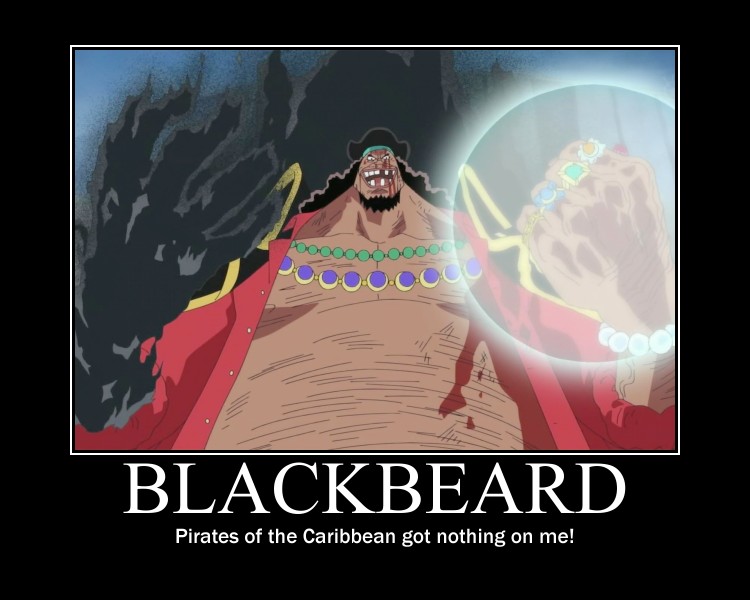 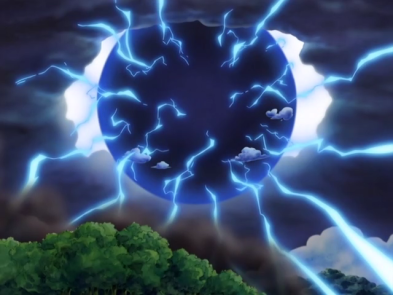 See you in my next (not so geek) blog post!