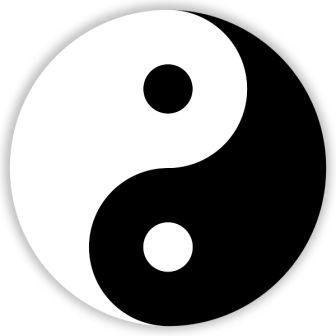 In the previous post, I reviewed very naively and shallowly some of the relationships between duality and gravity, and that from electromagnetic duality. There are many other interesting points. This post is aimed to highlight some issues and works that have not (to my knowledge) been exposed in the way I like.

Magnetic monopoles are that crazy but wonderful idea that make theoretical physicists to burn into their heads. As it is well known, from Dirac, the existence of a single magnetic monopole could provide an explanation of WHY electric charge is quantized (irrespectively the unobservable fractional quark charge and other fractional charges observed in condensed matter, I might say). There is a deep link between magnetic flux and mass, and therefore, one is tempted (not without troubles!) to identify mass as certain kind of “trapped flux”. It was an heritage that the second superstring revolution has left unended, to my opinion, because it points out to certain ambiguity of the choice of the fundamental degrees of freedom of any dual-theory that has remained until current times. Before to enter the game of the Dirac quantization condition and its brane analogue, let me expose some other basic stuff, a very well know fact that is sometimes left unexplained (or in the air).

Imagine you pick 2 electrons of mass

. What is the mass of that electron in order to have the electric ofrce it yields equal to the gravitational force it causes? To answer this, you only need school physics. What it is more interesting, is that due to the specific power laws of the Coulomb and Newton laws, the result is independent of the distance you put the electrons. You get:

is the newton gravitational constant and

is the Coulomb constant. This results even holds in any space-time dimension provided the electric force and the gravitational force “see” the same number of the dimensions, i.e., the follow the SAME power law. From this, the electron mass reads

Compare this to the Planck mass

The mistic and mythic electromagnetic fine structure constant. A pure number that has attracted everyone. Do you dislike

and no Planck constant. The same argument leads to

. That is indeed a deeper result, since you can change from Stoney units to Planck units inserting factors of

in the appropiate way. Of course, asking why the limit mass is the Planck mass or the Stoney mass to balance electrostatic and gravitational forces is other way to ask why the gravitational constant

number have the values they have. No one knows why, but it is an interesting question to imagine what would happen if their values were different of if they were variable in time (some old speculations are about this) or energy (this is more or less accepted, at least in Quantum Field Theories, QFT). Note, however, that if they do vary in energy, they had to vary in cosmic time (by duality,

, in quantum theories due to the Heisenberg uncertainty principle, but it is the way in which they should be the real problem). Therefore, the Coulomb constant and the gravitational constant combine with the electric charge to produce a mass scale, independently of details and the number space-time dimensions! However, the number of space-time dimensions can vary the proportion in which this is attained. The ratio between the electric mass and the electron mass IS (and this is IMPORTANT), in Stoney units,

allow us to define the charge to mass electron ratio (and other electric charge to mass by construction) in certain invariant way. Let me remember that Barrow et al. have probed (and I wrote about this in this blog) that for

space (space-time) dimensions, the next adimensional quantity can be made

Note the absence of

(due to the system of units they use).

in standard SI units, you would get instead:

Note what happens in

(no electric charge) and

, is important for multitemporal theories. Also,

(assuming space-time dimensions in a positive or null number), is the first number for which you need the quartet

in hidden format, to get the adimensional quantity.

Duality is a relationship, as far as you imply the original T-duality or S-duality, involving interchangeable roles of magnetic and electric roles. Surprisingly, it also implies a dual role of

. It is not strange. The speed of light is related to

. Now, if you want to have a single valued electron wave-function, certain phase quantity (a flux) must be quantized. In particular, using gaussian units, SI units (weber convention) or SI units (ampere times meter convention), you get respectively

is an integer number. Taking the first one, with

, it allows you to define the scale of magnetic monopole mass as

and the magnetic charge to mass ratio reads (compare with the electric case!):

Surprised? A duality in

! If you write units with

(a common choice), you get the disturbing result that the square root of the gravitational constant is related to the product of the magnetic monopole charge and the monopole mass! I don’t remember if this has been pointing out before, but it is a striking result! Have you ever heard that

? This could be tracked from this result. Is gravity caused my hidden and virtual “magnetic monopoles”? I know, it is a crazy idea. In summary

What else? Well, additional mysteries. Christian Beck has introduced the so-called Planck-Einstein scale with the aid of the cosmological constant. In particular, the Planck-Einstein length reads:

By the other way, there is another mass scale in stellar physics worth mentioning. The Chandrasekhar mass. Being

the Planck mass and

Scaling these numbers, a la Dirac, you can get that the number of baryons in the Universe is about

, the photon to baryon ratio is about

, and the Hubble time to Planck time ratio is about

. Note that the BH entropy also scales as the ratio

In searches for quantum gravity, sometimes is highlighted the resemblance of

with the Fermi constant

and the weak interaction before the rise of the electroweak theory that mades Fermi interaction an effective field from massive gauge particles. Using the Fermi constant, you can indeed define a length and mass scale. The Fermi length is

and the Fermi mass is, using

as a Compton wavelength

This number is about 290 GeV and it is closely related to the Higgs vacuum expectation value, about 246GeV, since the latter is

is a measure of the decay length of beta decays. Fermi constant allows us to introduce in a natural way a magnetic moment for neutrinos (yet unveiled!) as follows

and where the omegas are the energy densities of dark matter and dark energy, and

Beck, Wesson and others using de Sitter relativity have pointed out that the cosmological constant introduces other mass scale into physics:

. You can even wonder if the number of neutrinos, and the neutrino density, in the universe could be respectively

In fact, using purely formal arguments from information theory, Beck arrive to a striking proposal to get the electron mass from first principles. Writing

or, inverting the relationship, the scale of

It is similar, but not equal, to some previous results by Nottale using scale relativity since

is not exactly the Nottale proposal, but certainly something similar to it. Beck proposes that the vacuum energy density is related to electrons

Beck thoughts through the Planck-Einstein units is much more explicit 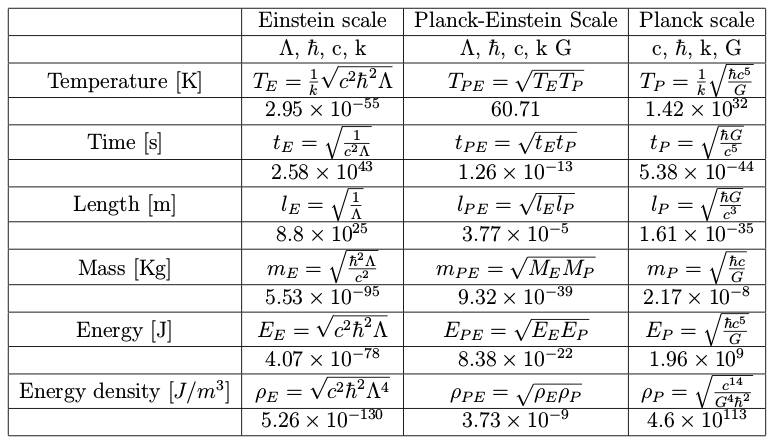 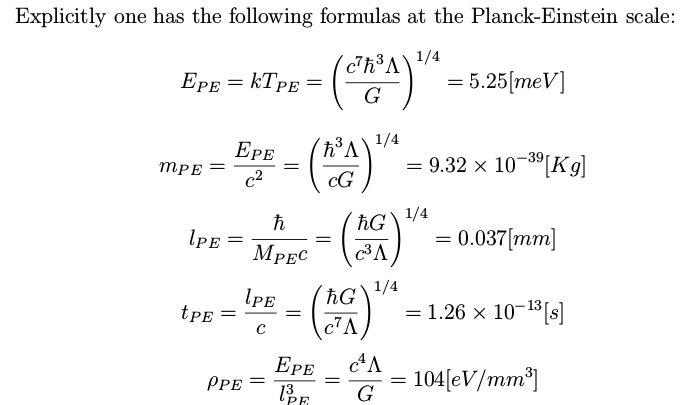 Other place where duality arises naturally is in Heisenberg Uncertainty Principle, or Generalized Uncertainty Principle, popular effective general results in some proposals of quantum gravity, but also popular in extensions of relativity like Born reciprocal relativity or dS relativity. Born conjectured that you should have to promote the duality of phase space to space-time. It can be done to a price. Several consequences arise, like maximal force/acceleration (to be discussed elsewhere) but, from the GUP perspective, the

symmetry implieds a GUP of the following type

The question IS, what are

respectively) is normal the correction is unnoticed. However, as far as I know, the

correction is less known. It is a pure number, it could be also very small (or zero) and related (or not) to

Going to space-time only, non-commutative geometry argues that space-time coordinates theirselves are non-commuting. The natural regulator could be the Planck length

Likely, it could exist a maximal length regular too, as a consequence of GUP! Inspired by the previous result, one searches for it in the form

. But, you can also get it with

iff (as it happens)

formulae are known since the early times of quantum Mechanics, with Snyder, Born, and other less known characters. That

is the string length or scale, it is also comprehensible from a non-perturbative way through the Schwinger effect.

Off-topic: if you are afraid of tiny numbers, you should remember that quantities like 1 shed (

are today common in nuclear or particle physics.

Exercise 1. In order to get

baryons in the Universe, what is the value of

you should plug into (

is the strong coupling constant):

Exercise 2. Could you fit the known hadronic and leptonic spectra from the following two-parameter formula for suitable values of

or using the Beck formula

is the Planck length,

is the electron mass and

is related to the maximal tension principle via

. Note the resemblance of this equation to the string mth octave pth note formula given by

For any space-time dimension

you can have a

gauge field that naturally couples to a p-brane, via a

field strength. Its dual is a

. It is written as follows:

, you get a phase transformation (module an integer number), and the Dirac quantization condition naturally follows. For

is the 4-momentum (generalization to arbitrary

being the magnetic mass, and where

There are also the option to get gravitational dyons. Dyons are particles with both, electric and magnetic charges is given by (Zwanziger–Schwinger quantisation)

For the gravitational case,

, you get the analogue formula:

would be the electric charge and the

the magnetic charge. For

, we have a space-time index, so conserved masses have dimensions of mass, and the

tensors are associated to space-time traslations. In fact, in principle, they are associated only to linearized spacetime diffeomorphisms. The back-reactions of these charges in the case

imply some technical difficulties, as we can not neglect non-linear (self)-interactions. Interestingly, Einstein theory does support the existence of gravitational dyons! I mean, general relativity can sustain the existence of both, electric and magnetic masses!