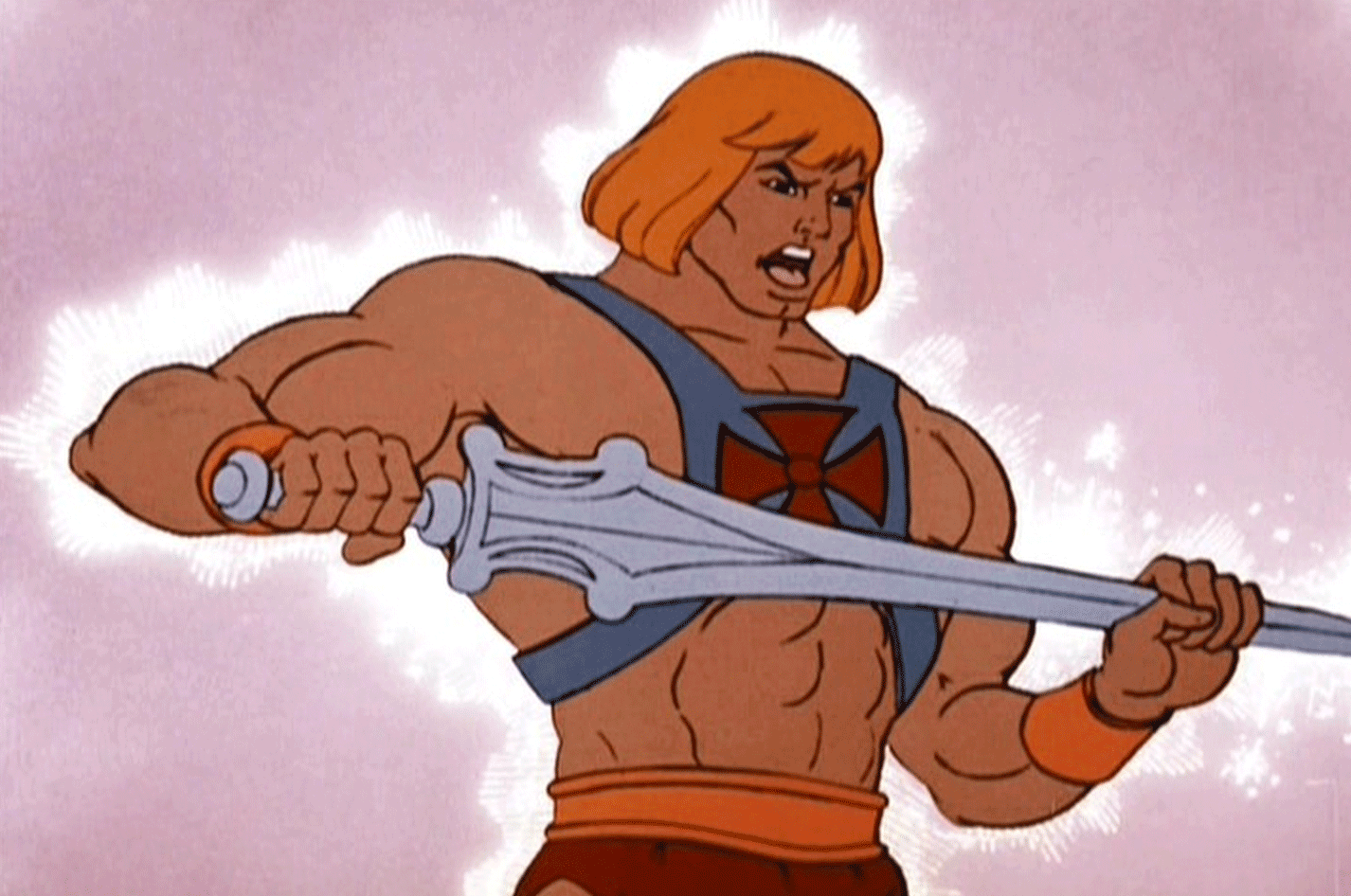 I have the power! I have a power BETTER than the Marvel’s tesseract. It is called physmatics. Hi, there! We are back to school. This time, I am going to give you a tour with some geometrical objects, or geometricobjects, if you want a full tense portmanteau.

Geometry is found in Nature. It seems Nature likes geometry, and even more, it favors the emergence of geometrical forms. Firstly, I am sure you know the cube. A polyhedron, such as, its volume or content is

, just in the same way a square is a polygon, with are

I am confident you also now the tetrahedron. The volume any tedrahedron and its total area are given by the formulae (A, B, C are the vertices of the tetrahedron, and “a” its edge length)

I can not resist myself to show you a relatively unknown formula to obtain the area of any triangle, if you know the sides (lengths) a, b, c, and the semiperimeter:

There is a Heron-like formula for the volume of the tetrahedron as well. Brahmagupta area for a cyclic quadrilateral (side lengths a, b, c, d) reads

or if you avoid the semiperimeter, you get

This Brahamgupta formula is a special case of the Bertschneider’s formula. Next step, the octahedron:

The dodecahedron has also

is the golden ratio.

Even when it is not any polyhedron, the 2-sphere has volumen and area

Wow! I am not sure you learned all these formulae at school (I didn’t!), but they are lovely! Mathematics is beautiful, radicals are nice! It is obvious ;). Platonic solids are cool.

Well, now we are going to go BEYOND…After all, polygons or polyhedrons are only special cases of polytopes in any dimension! Are you a beyonder? In order to study hypergeometrical geometricobjects, a bit on terminology. Polytopes is the word to generalize polyhedra and polygons to higher (finite!) dimensions. If the dimension of the “body” is:

Till infinity and beyond…Polygons with infinite edges are called apeirogons! A polyhedron with infinite faces could be named apeirohedron, and an infinite dimensional polytope is called apeirotope. Even more, you have skew apeirohedra. There is also strange polyhedra called pseudopolyhedra. Note that something related, but for fermionic or spinorial geometry has appeared in the analysis of quantum gravity. It is called the amplituhedron or positive grassmannian. I am not going to discuss the amplituhedron today, but it is nice to see we are coming back to Greek jobs on Geometry and Nature. The platonic higher dimensional polyhedra are named regular polytopes. They are fully classified. Regular polytopes are called in general the simplex (n-simplex, simplices in plural; the equilateral triangle and the tetrahedron are special cases), the hypercube (n-cube or cross polytope; the 4-D cube or tesseract, the cube and the square are special cases). There is also convex and star polytopes.

vertices or any n-cube has

vertices. Great? Now some formulae. For the n-simplex with edge length

, you have the following formula for the volume and the total surface area:

is the factorial of N, i.e.

. For the n-cube (do you love tesseracts? I love even more n-cubes!), you get for n-cubes

vertices. Admit yourself you love these formulae!

Naming is also fun with these things. As you have remembered, 3D platonic solids are five. The tetrahedron (3-simplex), the cube (3-cube, hexahedron), the octahedron (3-orthoplex), the dodecahedron and the isahedron. In four (euclidean) dimensions, 4D convex regular polytopes are six: the 5-cell (4-simplex), the 8-cell (4-cube, tesseract), the 16-cell (4-orthoplex), the 24-cell, the 120-cell and the 600-cell. In general dimension, greater or equal to 5D, you only have the n-simplex, the n-cube and the n-orthoplex as regular polytopes. You see there are some exotica in 4D! 3D and 2D are also special for regular polytopes. Any relation with the Poincaré conjecture or why we live in 4D? I am not sure, but you can write me if you want after passing the bot-spam test! Cross polytopes in any dimension are also fun. As you have read above, the point, the line, the square, the octahedron, the hexadecachoron (16-cell, 4-orthoplex), the 5-triacontakaiditeron (5-orthoplex or pentacross), and the n-orthoplex. Any n-orthoplex has

vertices. Apeirotopes are much less studied, to my knowledge, and maybe the recent interest in the amplituhedron or this post will drive the interest for these objects in the mathematical community. Apeirotopes are just interesting for honeycombs structures (like those in graphene!), and they have also variations like skew apeirotopes. In order to classify these objects, the Swiss mathematician Ludwig Schläfli created an array of numbers now known as Schläfli symbols. You can easily find out the Schläfly symbols for the regular polytopes I mentioned here. There is also a very interesting notion of duality (yes! duality!) between some polyhedra and polytopes that are more obvious as permutations of Schläfli symbols.

Well, the hypersphere  or n-ball case is worth mentioning in order to continue this post.

is the gamma function that generalizes the factorial to any number. Note, as well, a very strange thing about the factorial. It can be thought as the square of the contraction of a Levi-Civita symbol, since

Some string theorists usually prefer to compactify extra dimensions on balls or the n-torus to reduce calculations, but in principle, extra dimensions could have any topology or be discrete like a lattice or a polytope. However, dimensional analysis says that it only varies a number, not the scale

“The Leech lattice achieves the optimal sphere packing density in

, and it is the only periodic packing in

with that density, up to scaling and isometries. In particular, the optimal sphere packing density in

is that of the Leech lattice, namely

For the 8D (D=8) case (non-assiociative octonionic fans and friends here?) the result is the (hyper)sphere packing  constant

. I am sure John C. Baez will love this thing (his talks about numbers

The sphere packing constant measures which portion of

be the sphere (hypersphere) packing constant. In dimension 1,

, that is something greater than 90 per cent!

In fact, the values of

are known also for

(8 was rediscovered by Maryna, see http://mathworld.wolfram.com/HyperspherePacking.html ):

Thus, the Leech lattice density is the best of the best. High dimensions are everywhere! Low dimensions are anomalous. All data can be described by numbers, so any large collection of data is high dimensional. Why is this important? This is sphere packing! The error spheres of any message should form a sphere packing. This is called an error-correcting code. For rapid communication, want as large a vocabulary as possible. I.e., to use space efficiently, want to maximize the packing density. Rapid, error-free communication requires a dense sphere packing. Real-world channels correspond to high dimensions. Of course some channels require more elaborate noise models, but sphere packing is the most fundamental case. So, therefore, if you allow me this, communication is…An issue about n-balls! Have you got n-balls?Perhaps you should also explore hyperbolic spheres, named as horospheres/paraspheres, and hypercycles.

Why is the sphere packing problem difficult? Many local maxima for density. Lots of space. Complicated geometrical configurations. No good way to rule out implausible configurations rigorously. High dimensions are weird. However, it is a very important issue for communication theory, coding theory, quantum computing and information theory. Horocycles!!!! (No, they are not horrocruxes!) We really don’t know what the best sphere packing in a million dimensions looks like. Our estimate of its density might be off by an exponential factor. We don’t even know whether it is ordered (like a crystal, quasicrystal, polycrystal, quasipolycrystal) or disordered (like a lump of dirt, a foam or turbulent fluids). But these problems DO really matter. Every time you are using a cell phone or a computer, you can thank Shannon and his relationship between information theory and high-dimensional sphere packing!

Another piece, not totally unrelated to this geometric theme, is the common issue of folding a piece of paper. In 2002, a female high school student, Britney Gallivan, became famous and she is best known for determining the maximum number of times that paper or other materials can be folded in half. She worked out two beautiful theorems that, in my opinion, have to be known by mathematicians, teachers and people. The reason is that they are completely general and they use arithmetical and geometrical series in a wonderful way.

Proof. Let me consider a paper with length

. In the first fold, via a semicircle, the lost length is

. After the second fold, the lost length is

Adding the lost length after the n-folds, you have

Using the result about how to sum any arithmetic sum (Gauss, the king!):

Now, you can split this last sum as two, as follows

Finally, use the result for getting the sum of geometric series, to obtain

or equivalently, after basic algebra (hint, use

as we wanted to demonstrate. Q.E.D.

2nd Gallivan theorem. An upper bound and a close approximation of the actual paper width needed for alternate-direction folding is

where W is the width of a square piece of paper with a thickness of t, and n is the desired number of folds to be carried out in alternate directions. For paper that is not square, e.g., having a 2:1 ratio, the above equation still gives an accurate limit.

1st. In order to fold anything in a half, it must be

-times longer than its thickness. Did you love

is also related not only to spheres but also to folding something in a half (of course, the process is obviously related to the circle or semicircle).

2nd. Depending of how you fold something, the amounts its length decreases with each fold DIFFERS.

I found myself reading an application of Gallivan 2th theorem to Cosmology. Find it here https://physics.le.ac.uk/journals/index.php/pst/article/viewFile/858/631

and from the picture 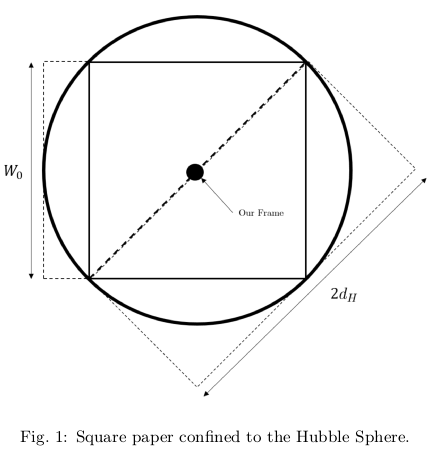 . Using the Hubble law with

and taking the current time

, the current values of the cosmological constant energy density

, then if space itself has folded from cosmic past to current time, the number of folds will be

Interestingly, today we have

(Why? Who knows? Who nose?). Then, rewriting the Hubble parameter in terms on the number of folds, you get

For the accepted values (today) of

, you get that the maximal number of folds in our Universe is about 67. The following picture show it better 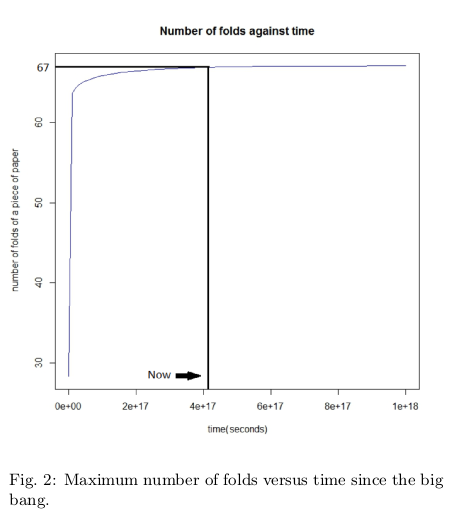 You could also ask if elementary particles are “stacked” or “folded” branes (p-branes). Gallivan’s theorems provide a very general way to estimate the number of times you have something folded or stacked to get something of ANY “size”.

Exercise 2. How many times or folds should a superstring have been curled up or wrapped around an extra dimension of size

in order to get something like the classical electron radius or the asummed right proton radius. Plug

as the Planck length as initial guess. Plug another “reasonable” values of L. What do you learn? I believe this exercise should be done by ANY stringer/M-branist/Dp-branist or fan of extra dimensions. Compactified space as folded space has curious trickery related with the worst understood mathematical scaling: exponential scaling. It is very counterintuitive. Do it yourself. Some numbers used in known compactifications can be compared with your results.