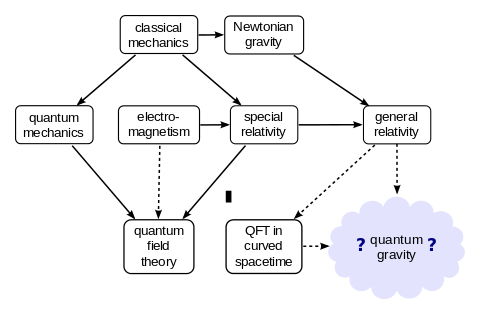 Hello, world! In the paper Notes on several phenomenological laws of quantum gravity, by Jean-Philippe Bruneton, you find a very interesting discussion I am going to enlarge about the scales of (quantum) gravity. With Planck quantities:

and combinations we can obtain almost every physical quantity. I disagree, in part, since we also need

, but it is essentially correct. However, why not instead

as fundamental? Indeed, a maximal force/tension arises from

(there is a mysterious

factor there, tracked back to the Bekenstein-Hawking formula? Not so clear to me, but it is interesting how numbers and variables appear in physics or physmatics. If you take

as fundamental basis, the Planck constant and

In fact, there is a natural notion of invariant mass, a mass bound, in D=4. Any physical system with size

has a maximal mass about

, modulo a proportionality constant. In covariant way, any 4D space-time free of horizons, and a lightlike surface

, codimension 2, the integrated mass on the light-sheets

This bound is related to Bousso seminal works about the holographic principle. Next, Jean-Philippe uses the area of a Kerr-Newmann black hole to derive a set of rules any physical mass should verify:

for some pure number

. This is independent of the number of spacetime dimensions

. In fact, the quantum of action can also be derived from the area bound

but it implies certain class of

depending on the number of spacetime dimensions! This last quantity can be compared to the gravitational analogue bound

Note that these expressions can be related through a duality

In higher dimensions, we can write

where pure numbers have been neglected and

is the area of a codimension 2 surface,

is the newtonian gravitational constant in

dimensions of spacetime. From this,

while the Planck action constant is now

and thus, only in 4D it has dimension of action! From a dynamical viewpoint, consider the Einstein-Hilbert action in

. It implies that the gravitational lagrangian has dimensions of

, and it is a curvature only when

. As this seems quite unlikely, anyone can build lagrangians (or actions) with the curvature scalar or its generalizations, but these actions are not usually of dimension of

. Could it explain why hamiltonian canonical methods are hard with usual methods? What are we missing here? In any case, if

is dependent on the space-time dimension

, it would have far reaching consequences. Specially on extradimensional physics.

would be a crazy thing…

The next plot is worth mentioning: 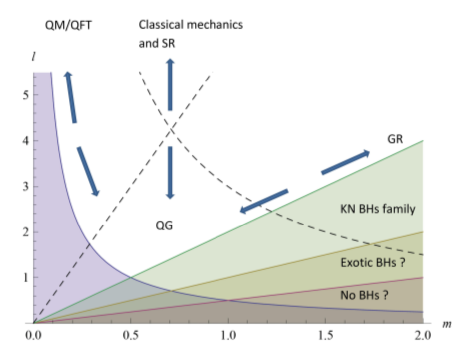 . The minimal Planckian wavelength can be a bluff of our ignorance. Using dualities

Only when the wave-length approaches

the black box contain the quanta saturate the mass bounds. Indeed, minimal resolution does not seem to imply a minimal wave-length according this paper we are discussing today. Similarly, with transplanckian momenta

Anyone could protest! After all, we all know the IR-UV regulators in Quantum Field Theory. However, they are related to ignorance and details of interactions and degrees of freedom. Even when physical systems can not be smaller than Planck wavelengths, sub-Planck wavelengths could be allowed! Of course, this is weird…But relativity and quantum mechanics are weird! We should expect quantum gravity in its final formulation be even more weirdo. Wild speculations from relatively unknow researches are related to the existence of the alledged maximal force/tension, or maximal acceleration in Nature. Caianiello and others have studied it. You have also

when put into numbers. This planckian acceleration is not Caianiello’s maximal acceleration. Interestingly, the paper mention the odd result I am going to tell you now. For scales

the maximal acceleration is the Caianiello’s value

, you guess a classical bound

in natural units, in the Caianiello case, and about

(duality?) in the classical case! Caianiello’s maximal acceleration has an apparent advantage: it does NOT depend on

. Caianiello trials to generalize or derive quantum mechanics from geometry were interesting. They are linked to Finsler-like geometries (phase space-time!):

in eight-dimensional spaces! With a proper time, this can be rewritten as follows

Going beyond, you can also include higher derivatives of

. It is some kind of non-local geometry, … Higher-order geometries of Finsler-like type have been studied by Kawaguchi. Another source of acceleration is Hubble parameter (via cosmological constant, if you wish), since

However, that seems much more a MINIMAL ACCELERATION, of hidden quantum or subquantum nature. From the above previous arguments, up to constant pure numbers, you get maximal force and maximal powers for the two scales

Maximal energy density (and pressure) are also a follow-up:

The scale of gravity in the IR and the UV has to be proved more and more. After all, the “constant”

is the fundamental constant we do know with worse precision (or accuracy). However, the cosmological constant puzzle has introduced new scales, as I mention in previous posts. Of dark energy? New physics? Let me introduce de Beck-Wesson scales, and the Garidi mass:

and it can be also understood as some type of gravitational Schwinger critical acceleration. The Schwinger effect is related to the creation of a pair of particles by any strong field. For the electric field, in Q.E.D., you can use school physics to derive the critical electric (or magnetic, via

) as follows. Take a electric field and increase it until you have enough energy to pop-out a particle-antiparticle pair. How strong must the electric field be? Supposing you have plates separated by twice the Compton wavelength of the particle,

so the field must be at least

If you do the same for the gravitational field, you get Caianiello’s acceleration! The easiest way is to put

in that case, but you can also derive it from

in a similar fashion and it can be generalized to any dimension! A Schwinger ensemble of critical photons (or electrons) in

dimensions will satisfy (check it yourself):

This kind of quantization has been proposed by Dvali and Gomez in the Quantum N-portrait interpretation of black holes. For gravity, the same dimensional argument produces

And from these relationships, you can even guess the maximal complexity principle of the Bekenstein-Hawking black hole entropy in any spacetime dimension up to a pure numerical factor. There is a deep link between the equivalence principle and the Hawking or Unruh effects. They are equivalent, provided certain class of the equivalence principle holds. The Unruh-Hawking-Schwinger effects are indeed all THE SAME thing. I mean, they have the same origin. Vacuum. Void.

To end this post, something off-topic…Have you ever wondered the cross-section for two photons become two gravitons or vice versa? It can be done. Skobelev and De Witt did it, to my knowledge, and the result has been rederived with modern mathematics in recent times. The integrated cross-section is:

and the differerential cross-sections are given differently from Skobelev

is related to Newton gravitational constant. Can you check they are equivalent? See you in another blog post!