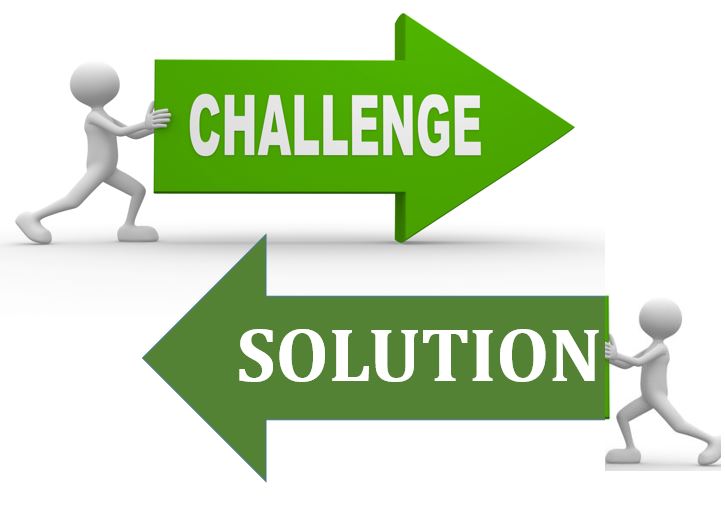 The main challenge we are left to the 21st century and beyond is to unify every interaction into a single theory. Today, we have two main theories:

. The SM does not include gravitation, so the graviton is just another story. The LCDM cosmological model says to us that atoms and particles are only up to a tiny 5% of the whole Universe. The rest, 95%, is dark mater, 27%, and dark energy 68%. The SM particles can NOT be the DM or the DE, so we are into trouble.

The Higgs field is also mysterious. It is the mass giver to fundamental particles (not to composite entities like the proton, who gets mass through the QCD), and then, any fundamental particle obtains mass with interactions through the Higgs mechanism. No one knows why the couplings of the Higgs to the particles is as we measure. The Yukawa couplings are not derived from any symmetry, as the Higgs itself is not associated to any known symmetry. Sometimes, the Higgs particle and its field are imagined through certain (not precise, I might say) analogies:

Analogy 1. The Higgs field is some kind of fluid with resistance or friction/viscosity. Issue: “particles can not be stopped”.

Analogy 2. The Higgs field is like a room with people in which a famous person enters in. Issue: “elementary particles are not just like famous people”.

Anyway, the most formidable analogy to imagine the Higgs field is to associate it to the quantum fluctuations of a sea (the vacuum). Higgs particles are just the vacuum excitations of this field, like some chunks of sea water under certain circumstances. Let me ask 7 questions answered but sometimes asked in seminars or discussions:

Why is there something instead nothing? Well, that is another puzzle, related to the matter-antimatter ASYMMETRY we observe today. The CP asymmetry, or why there is much more matter than antimatter is a riddle with no known definitive solution, yet.

for the particle masses. The rare fact is that there are many light particles compared to the Higgs or the top quark (the only anomalous massive fermion; if this means something is obscure yet). The expectation value of the Higgs is

Higgs mass, about 125 GeV, is unstable under quantum corrections. Since the Higgs mass is NOT the Planck mass, something must exist to make it low. Whatever it is, it is unknown. This fine-tuning is very strange. The superstring revolutions made lots of people impose supersymmetry, a highly non-trivial symmetry mixing space-time symmetries with internal symmetries, as ansatz to save the world. Supersymmetry, SUSY for short, can keep the Higgs mass light and much less than the Planck mass. However, no SUSY particles have been discovered by the LHC till now. Or in any DM detection experiments outside the LHC around the world. SUSY is just an operator changing fermions

If SUSY is not “broken”, then

, i.e., there are the same numbers of bosons that fermions. The SM is not SUSY (however, some people could think otherwise…). The minimal supersymmetric SM is called MSSM. Its particle content is given by the next table: 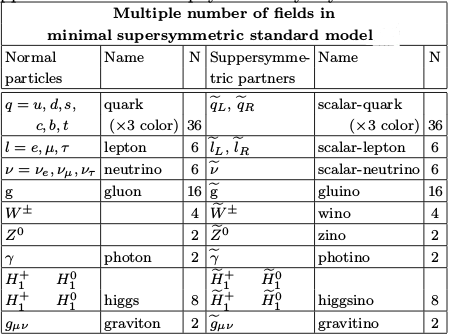 I personally find disgusting the equations and complexity of the MSSM. Of course, it can be done, but the SM works fine and better without doubling the particle spectrum. There are some nightmares for particle physicists these days. The most terrible scenario is the so-called desert. The desert hypothesis says that there is no new physics between the electroweak scale and the Planck (mass-energy) scale. Well, if you believe that the neutrinos have masses (as indeed they do have), this can NOT be true. Neutrinos are massive (at least one of their species), and you have neutrino oscillations. Neutrino oscillations and the seesaw mechanism are a well-established way to give masses to neutrinos (even when you can get Dirac masses), including the exotic Majorana mass. Right-handed neutrino could be very heavy, and they could explain lots of parallel issues. The sterile (right-handed) heavy neutrino could be a scale a new physics. By the seesaw, the scale can NOT be the Planck mass. It is something between 100 TeV and

TeV. Massless neutrinos could yet exist, but at least one neutrino species is massive, and that is the biggest hint we have about the new Physics from the SM, and of course the Higgs mass or the top quark coupling to the Higgs.  The SM has another more complicated issue I have discussed before in the QCD sector. There is an interaction that could exist that is made of the dual field strength of the YM theory in

. That term, the so-called

term is very close to zero. This is the strong CP problem. To solve it, many ideas have been proposed, the most popular being the axion or even extra dimensions.

Cosmology faces similar issues. Even when the precision Cosmology is yet to come, the current values of the cosmological parameters rise a number of questions similar to the above:

GUTs, grand unified theories, imply that there is also

bosons that make proton unstables. However, the proton is very stable. To detect a proton decay you must get a big number of protons to enlarge the odds of seeing it to decay into something. Popular theories beyond GUTs, TOEs, like superstring theory, face similar problems and even more. They predict the existence of

different vacua. The landscape problem in string/superstring theory is that there are to many compactifications of the higher dimensional theories (10D and 11D mainly) giving a vacuum or Universe like ours. The original hope to find a single vacuum seems to have been lost in the stringy field.

A few additional comments: without the cosmological constant, it seems, there is no Universe like ours. I mean, if the energy density of vacuum were so big, the Universe had collapsed unless it does not couple to gravity. It seems unlikely. Who knows? By the other hand,

quarks are massive due to the Higgs, but they hadronize due to QCD. Protons and neutrons (or baryons in general) are complex objects. Indeed, the main contribution of the proton (or neutron) mass comes from non-perturbative effects in QCD. It is the highly non-trivial vacuum structure of the QCD why proton got masses. If no QCD, there is no hadrons like we know. If no Higgs bosons, atoms would not bound and form, since electrons would be massless and they would escape at the speed of light form hadrons or nuclei!

What is mass? The SM changes the paradigm. Mass (of fundamental particles) is provided via interactions with Higgs field through Higgs boson particles. Any particle X get a mass

. So, we have changed the way to ask why there are masses to the question of why the Yukawa couplings or the Higgs v.e.v. are those we observe. Nobody knows the reason. Hadrons, I insist, get masses via QCD, at the effective level via interactions with pions. Protons have a mass about

. Nobody knows why it works. Or why the proton mass and the neutron mass are a little bit different. Why is the electron mass 511keV? Nobody knows.

The SM lagrangian is a complex lagrangian. It is very hard to explain it here, but I did it in a thread. The Higgs potential seems to be much more simple,…It seems to be:

Historial remark: if you think that the electron was discovered in 1897, the top quark in 1995, and the Higgs boson in 2012, you can realize particle physics is slow (just like the superheavy elements searches or even worst!). As a summary, we could say the Higgs field and the SM physics are fundamental but they face many unsolved issues. The Higgs field can be imagined, approximately  only, as waves in a viscous fluid.

What is the simplest way to mathematically understand the Higgs mechanism? A matter field hast a wavefunction

. Mass terms are not invariant under this symmetry, since

The simplest solution to keep invariance is to add a new field, the Higgs field, to compensate the extra factor. Suppose you transform

, and the Higgs field as

, then you observe you keep invariance since

However, the mass is not yet the physical mass, since it is not interaction mass. The final trick is to excite the Higgs field a little bit, writing

where the interacting mass is

and the interacting term is made of three fields. The Higgs boson is a property of fluctuating vacua. It should respete P,C,T symmetries. The Higgs field and the Higgs mass is the only mass without explanation in the SM, because the Higgs must is put by hand. The SM gives no specific mass to the Higgs mass, but it provided some consistency bounds (by unitarity, triviality and previous precision measurements, we did some guesses). Mass is important, since due to the equivalence principle, there is only a mass (not three!). Inertial mass equals gravitational mass (or gravitational charge) with high accuracy. In order to find why there is no antimatter (or very few amount of it) you have to invoke the Sakharov conditions: violation of CP (T), violation of the baryonic number (

), and out of equilibrium physics. The 3 conditions seem to be satisfied in the context of the SM, at least from the phenomenological viewpoint.

Why the Higgs boson lifetime is about

? Why its decay width is about

? For the given observed higgs boson mass, the most likely decay products are

. Processes of Higgs bosons into 4 leptons have been observed to identify the Higgs particle.