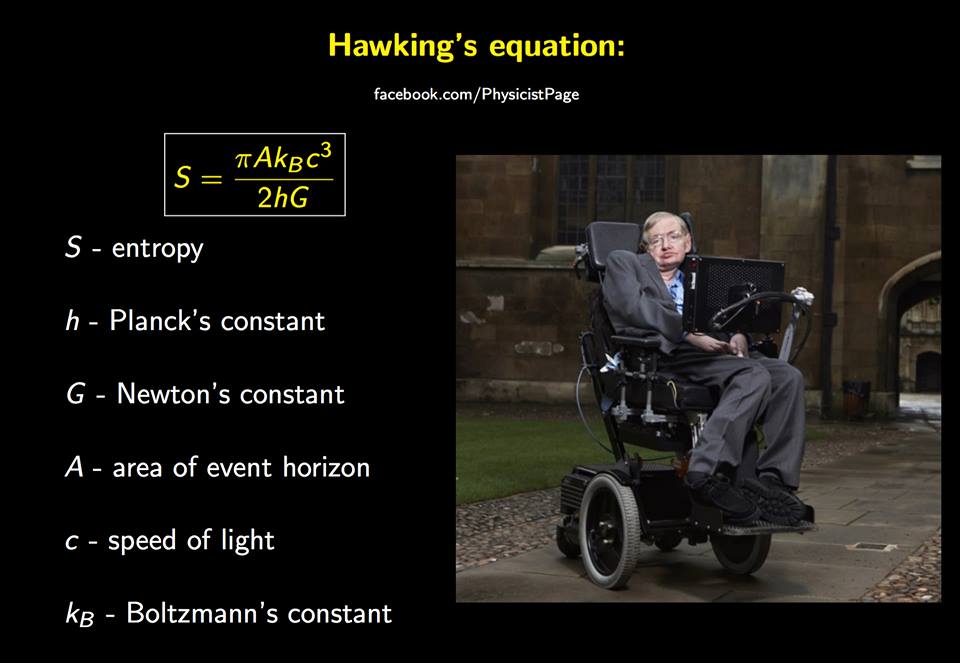 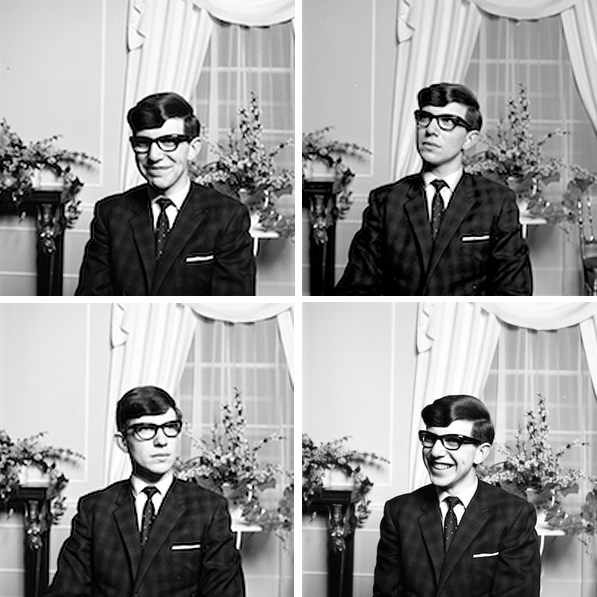 I am going to teach some bits of black hole today. For the simplest static (non-rotatory) black hole, the whole space-time is fully specified by mass

. The critical radius for a black hole is the Schwarzschild radius

The celebrated Bekenstein-Hawking area formula for the entropy is, as you already know if you follow my blog:

. A note I have never done before: entropy from Boltzmann formula

, energy divided by absolute temperature. Using Shannon definition, you get

using units of nats. Nats are equal to

hartleys, bans or dits. And 1 hartley is

nats. Therefore, you can express the BH entropy in terms of

, hartleys, or shannons (i.e., bits or dits as well!). Hawking’s biggest discovery was the black hole temperature, that fixed the

factor in the area law from the Bekenstein’s biggest discovery, the analogy between black holes and thermodynamics:

And, moreover, since black holes behave as blackbodies, they radiate! As they radiate, they become smalles (I am neglecting accretion, of course, from the macro-world) and they explote. The evaporation time for

and the black hole luminosity from a pure blackbody reads

from a BH flux

As the luminosity is power, or rate of change of energy:

is the Planck mass, and

is a solar mass)

A Planck mass BH evaporates in about

. For a solar mass BH, you need about

, evaporating by now, has to be about

. However, taking the cosmic microwave background (CMB) temperature, and equating it to the Hawking temperature, you obtain a bound about

. Black holes as dark matter (primordial black holes. PMB) have been proposed. The interesting window of mass is

Even more,…If you add extra dimensions of space, e.g.

extra space-like dimension, and you define the fundamental scale of gravity as

, then you have that the evaporating time for a higher dimensional BH scales as follows

are “the same”, excepting by the diffusion of gravitational flux through

There are other types of black holes: extremal (superextremal), type D, with cosmological constant, primordial, … Mechanisms for BH production in laboratory and/or astrophysical scenarios are also interesting. Even their simulation via analogue fluid systems or quantum computing! For Kerr or Kerr-Newmann black holes, the following bound is known

in Planck units. The equivalence between the Hawking process, the Unruh radiation and the Schwinger mechanism is also curious. Another interesting radius for BH systems are:

the photon sphere and the inner stable circular orbit radius, respectively. And

. Knowing this, you can fix the number in BH from thermodynamics:

factor. Indeed, in extra dimensions, you also get:

More on extra dimensional p-branes, not directly black holes but alike. The tension for a p-brane reads

and the YM coupling

in some way. Black branes are BH-like solutions in superstring/M-theory. In extra dimensions, the newtonian gravitational law reads off as follows

where the omega is the surface area of the unit

Kerr (rotating, uncharged) BH are interesting. Collide two of these Kerr BH. They will emit energy in form of electromagnetic, gravitational or any other form of radiation. The maximal efficiency is known to be (due to Hawking himself):

Charged BH are worst for efficiency process in BH thermodynamics. Hawking knows this from his paper, Gravitational radiation from colliding black holes. Rotating BH has a Hawking temperature

is the Kerr parameter. Take yourself a few Planck absements,

, in order to guess that the right formula for the power of Kerr BH is

For a Kerr-Newmann BH (rotating, charged), the power is

To end this post, and to prepare you for the follow up post, let me speculate a little bit about BH “are” or “we think they are”:

That entropy of any BH seems to scale like area and not like volume, is sometimes refferred as the holographic principle. BH entropy seems to be non-extensive. Indeed, this suggests a link with condensed matter. Or even with solid state theory. Are BH “materials”? Of course, since matter and energy are equivalent when you are using relativity, they should. That charges of BH are on the boundary, it seems, and not on the full volume seems to be something like topological insulators or superconductors. The quantum theory of space-time is yet to be built. Is it a world crystal like P. Jizba and collaborators suggest? A crystal is any highly ordered microscopic structure with lattices extending in all directions of space. However, solids are generally much more complex. Polycrystals are many crystals bonded or fused together. Is space-time or a BH a polycrystal? The classification of solids in crystalline, polycrystalline and amorphous could be also useful in BH physics! Polymorphism implies many crystals or phases. There are allotropy and polyamorphism as well. Furthermore, if you extend these thoughts to quasi-crystals, you get a bigger picture of black holes. Quasicrystals are non periodic “ordered” arrays of atoms. Could BH be quasicrystals? The International Union of Crystallography (IUC) defines crystal in a very general fashion. Its definition contains ordinary periodic discrete crystals, quasicrystals, and any other system showing some periodic diffraction diagram/pattern. Crystallinity itself is any structural order material, solid of material system. This definition paves the way towards topological ordered systems. It yields and correlates with hardness, density, transparency, diffusion and other material features. Crystalites or grains are the basic pieces (atoms) of polycrystals or polycrystalline matter. There are also materials “in between” crystals and amorphous materials. They are called paracrystals. More precisely, paracrystals are short medium range ordering lattice material, similar to liquid crystal phases, but lacking ordering in one direction at least. Geologists admit, today, four levels of crystallinity:

Open question: could you guess a way to classify BH solutions with certain geological dictionary? I did it. And it is lot of fun! Let me know if you arrive to some conclusion like me.

Open question (II): the Hagedorn temperature is the temperature beyond string theory ceases to have sense. The degrees of freedom have to be redefined beyond that point. Dimensionally, check that

When  is Hagedorn temperature equal to Planck temperature? Could they be different? Following the same arguments, calculate the temperature of a gas of

branes and its Hagedorn temperature.