Preface (by the webpage master administrator, Amarashiki): This is the first invited post here, at TSOR. It has been written by Alejandro Rivero, a bright non-standard theoretical physicist out there (you can follow him at https://twitter.com/arivero). It has some outstanding remarks on the (super)bootstrap, compositeness, supersymmetry (SUSY) and the Standard Model (SM), and it requires only knowledge on group theory and particle physics (the Standard Model, of course) to follow it. 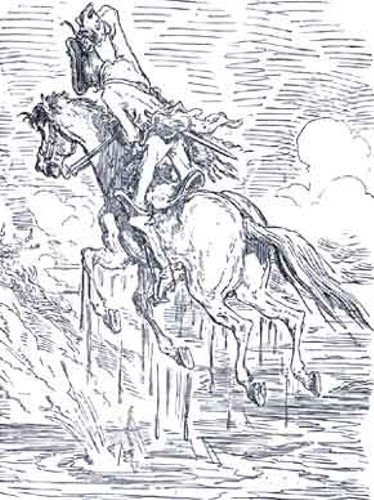 In the picture, Baron M. gets itself out of swampland by pulling from his own (and his horse) pigtail.

Bootstrapping is the idea of fixing some of the parameters of a model by asking for consistency in some self-referencial way. It was popular in the sixties associated to the concept of “nuclear democracy”, that all the particles were equally elementary or composed of themselves, depending of the channel where the interaction happened. In some sense the theory raises itself by pulling from its own bootstraps.

Supersymmetry (SUSY) is the idea of allowing a symmetry that transforms bosons to fermions and vice-versa; one of its consequences is that for each spin 1/2 particle the model must contain two scalars of the same charge. Such “superpartners” were expected in the LHC, but they have not appeared -yet?-, casting shadows of doubt about the usefulness of the idea.

It was never hoped that the bootstrap could be able to fix the multiplicity and quantum numbers of the particles in a model; nowadays this task is partly done by another consistency requirement, anomaly cancellation. But it happens that when combining the ideas of self-reference and supersymmetry the selection of models reduces considerably.

1. The view from above

. We can factor it as flavour times colour,

. Or, if you prefer, branch down

Our interest, as we will explain in a moment is in the

multiplets. Breaking them further via

it looks as three generations of scalar leptons. It starts to be interesting, do you agree? Furthermore, the

and then extending the assignment of the

can be interpreted as three generations of scalar quarks and leptons: 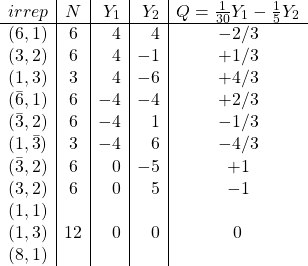 The table is interpreted as three generations of scalars with the correct electric charge; plus three “half-generations” of a

object. It could be interesting to set also the Q of this extra (1,3) to zero, but in order to do this we would need to grant some baryon number to (6,1) and (3,2). This is possibly the most straightforward way to obtain three generations of standard model color and electric charge out of a string motivated group. I have never seen it quoted in the literature, but I have never been very conversant with string literature. From GUT point of view, this also left unnoticed because one wants to get also the chiral charge, and then one looks for spinors  in complex representations by exploring groups

. To propose an identification for the components of the

. We see that the 10-plet has three elements with

and then the corresponding opposite charges. Abusing a bit on traditional notation -or perhaps not!-, we can call

to the elements of the triplet and

to the doublet. It can be said that the bosons are actually being generated from pairing “quarks” or “antiquarks”.

To upgrade the above view to something similar to the standard model, we assume that there exists a supersymmetric theory containing this same set of scalar states, and that there is a nuclear democracy in the labeling: the “Chan-Paton charges” of this theory are  a subset of the quarks. We can call them the light quarks or, indistinctly, the preons of the theory. The model itself can have more quarks, even more generations, but only the “light ones” can bin into scalar quarks and scalar leptons. So, consider

. Our postulate is that they combine pairwise -at the extremes of an open string- to form consistent generations of squarks and sleptons. We can formulate this requisite in two ways:

In any case, either requirement fixes

and then the allowed groups are

even. The smallest possible group is, as expected,

, but bigger groups are possible. Whan we need now is an extra postulate to fix

. The simplest extra postulate is to ask for absence of excess neutral bosons.  With this extra requisite, the solution is unique:

Now, we can try to add

colour and in this path we scale up the group size. We notice that a full representation of

would have a size

and then we suspect we can get the needed representations by breaking some group of about this number of components. Immediate candidates are

. We have got a good match to the non-chiral quantum numbers of the standard model using the former, it is work in progress to see if using the later we get some match to the chiral numbers.

A peculiar thing is that the bosons of this theory appear in equal number that the different kind of mesons known in the experimental spectroscopy. This is, of course, because the top quark does not hadronize. On the other hand, the diquarks here are not the “good quarks” but the bad ones; they have been paired with the adequate colour during the branching. An interesting idea is that we are actually seen, as mesons and diquarks, the remmants of the scalars of the supersymmetric standard model.

Remmants or hidden, what we are telling is that the scalars are composites of the quarks. So we have a theory of preons, but without preons. But of course, we could ask what is the result of applying the SUSY transformation operator to such scalars. Is it a composite fermion? I do not know, but if it is, it is a composite containing quarks. The standard model particles bootstrap, themselves, as composites of themselves.