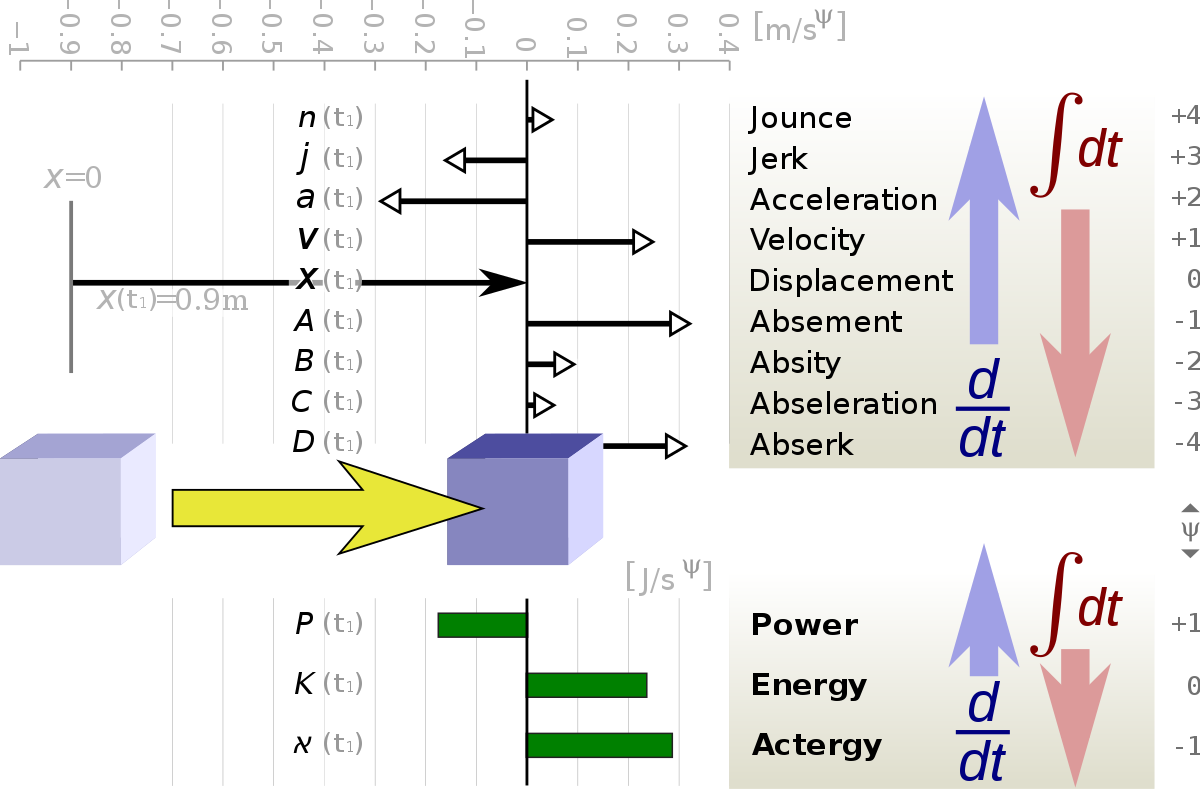 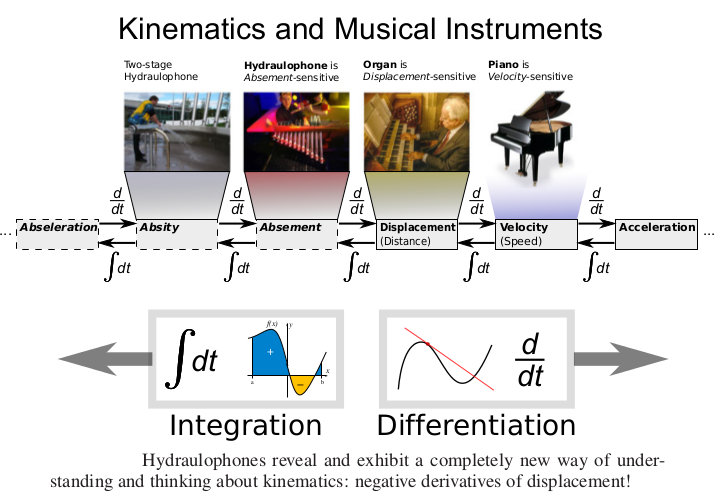 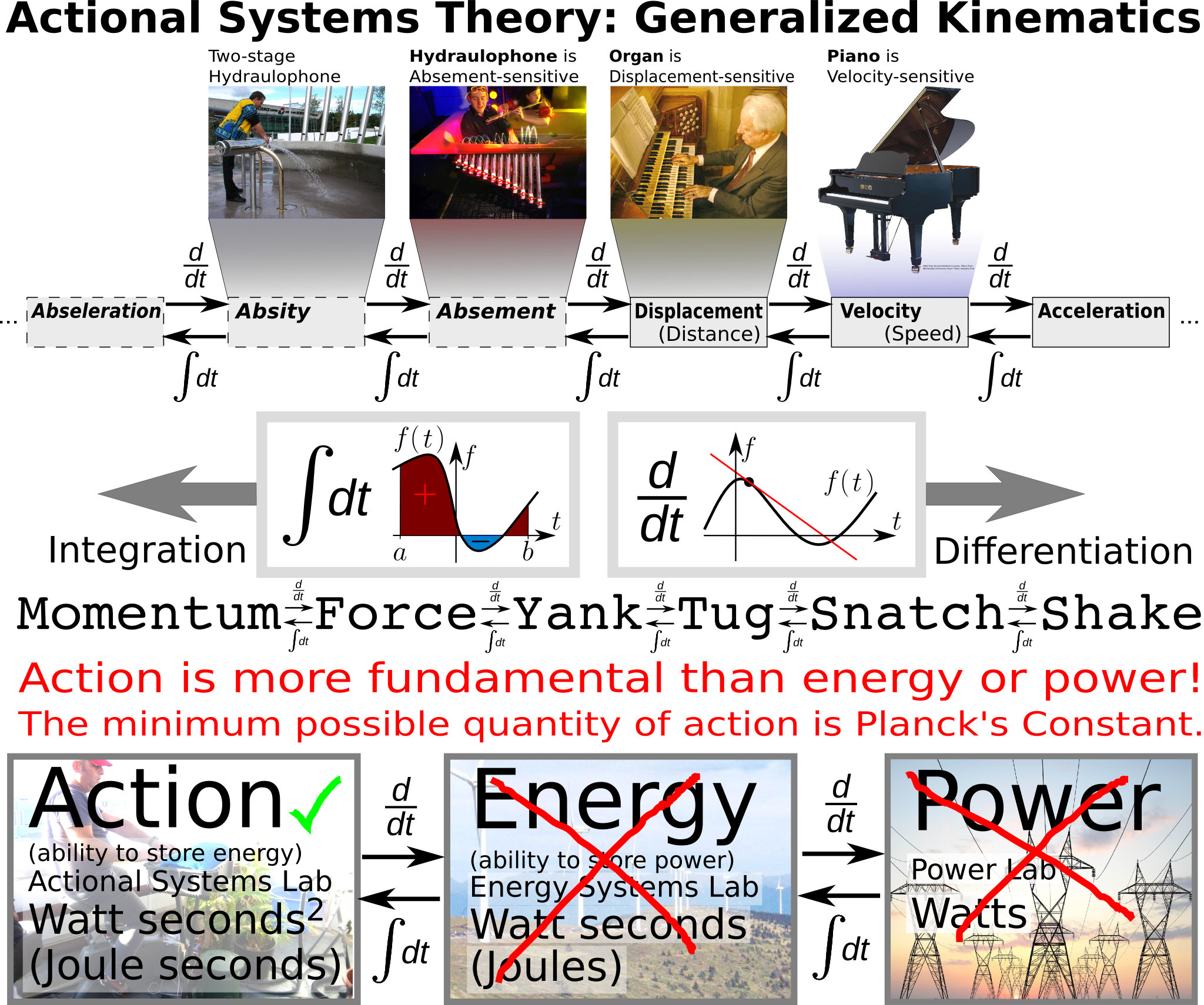 Absement is generally defined as

We can even integrate the absement

. However, if time is multidimensional, and the time vector is written as

We can indeed define some interesting generalizations of the absement.

Second generalization: the pseudovector (bivector) absement (valid in when the cross product is avalaible):

Of course, you can easily include the spatial variables as well in the above definitions, but it would drive us to think absement in terms of field theory, what it is indeed “natural”…Note that separability of variables is a subtle issue in quantum mechanics due to entanglement! Something similar happens in relativity when two tensors are decomposable into pieces with tensor product or when you have an antisymmetric tensor decomposable into exterior products (decomposable p-forms).

is a 1-vector or 1-form (by duality), but we can even generalize this to an arbitrary antisymmetric

-form, by duality). Thus, in that case, the fourth generalized absement is a

Indeed, we can even go further, by going to the full-relativistic case, defining the speed of light vector (1-form dual)

With this definition, in 1T physics, absement has units of

, as dimension of length is the same of that of time, and hinting that area or absement are MORE fundamental

we get something with units

, or using the speed of light

-form is separable or not is irrelevant. The generalized absement will have dimensions (after speed of light conversion) of

. Again, only a fundamental length is important and write:

-space (Clifford spaces) or super-spaces (and even hyper-superspaces!), you can create the most general absement-like object as follows. From the Clifford product

where we take the order

). This global generalization for any multivector and polyvector has a very interesting feature. It simplifies the relationship between area and absement. Formally,

where we have assumed that

is a classical commuting c-number, so absement is like an area or reciprocally, spacetime is the SQUARE root of absement! If

were a grassmannian absement (Oh, God! I love this variation!) field, it would provide absement of order one, since integration acts as derivative for grassmannian variables according to the Berezinian prescriptions. Is out there any generalized absement useful for physmatics? Is there a reason why action is more fundamental than power or energy or are we just biased? If action is fundamental, could absement play a more fundamental role in future physmatics? Surely it could be…After all, action, power or energy are only three possible variables between many of them! Maybe, the privileged role of actergy, a.k.a., action is a consequence of our human perception and we could chose any other kinematical and dynamical variable for describing motion. Absement based dynamics is something it could be even more than possible in the future.