Hi, everyone! I’m sorry again for the time lapse, but I required to. To secure my current job (as High School teacher), and well, to fight against doubts about my health. Thank you for your patience!

Gravity is weak (at least on our brane!). Force carriers and couplings tell us this: 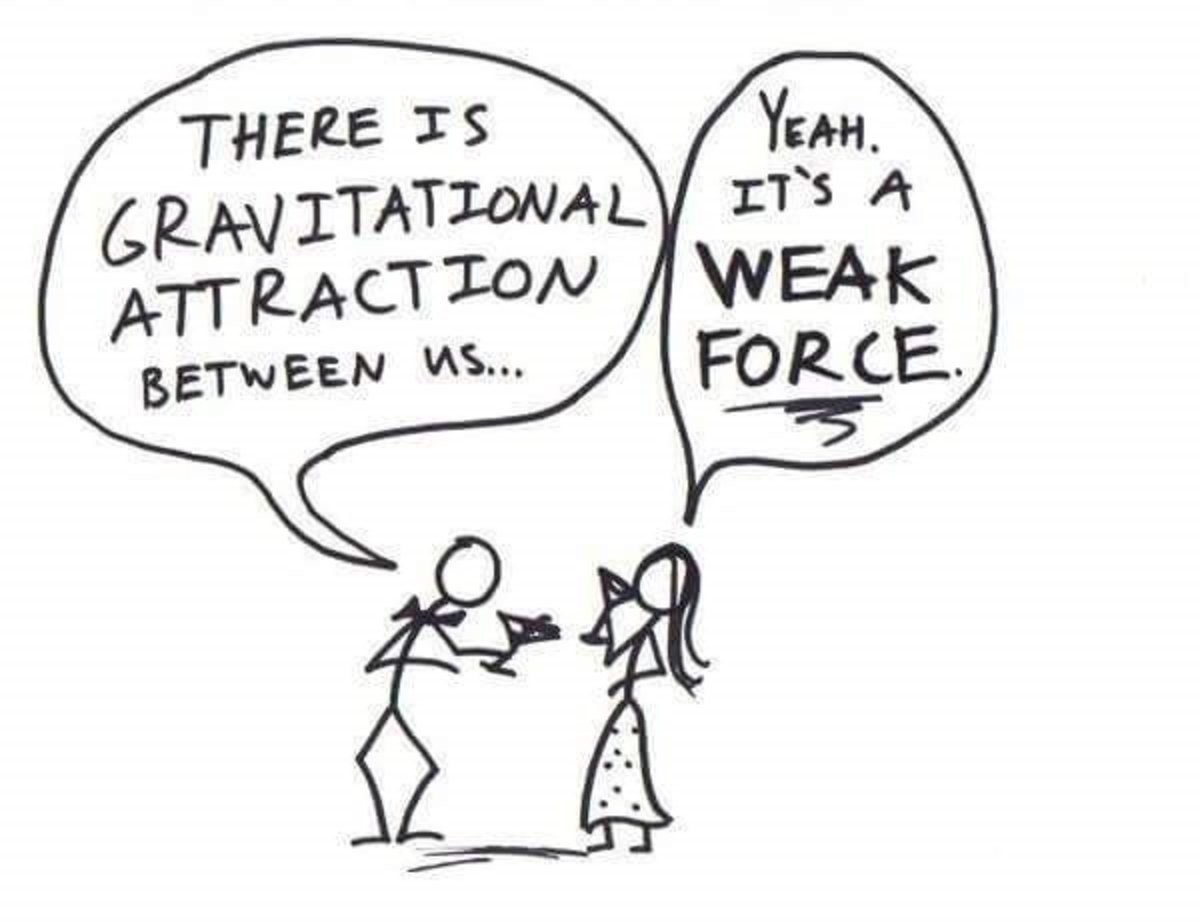 Are you weak? Well, I know, I know…Weak or strong depends on the context and the regime you are. Maybe…But why quantum gravity matters here? Well, we want to unify gravity with (Yang-Mills) gauge theories. It is hard.

From general perturbative arguments of quantum field theory (QFT), every theory can be expanded around

. However, the so-called semiclassical computation is expected to break down at some point, due to our ignorance about the true degrees of freedom of gravity and quantum space-time at the microworld. For instance, a classical similar phenomena does happen in the Standard Model (SM). The SM electron is not “very light” or too heavy. The renormalized photon coupling near the electron, and here is where the Weak Gravity Conjecture (WGC) enters, where the scale

, the electron charge times the Planck mass (natural units are selected here), differs up to order ne from the IR low energy theory given by classical QFT. That is, what is the WGC? Simply, it is the statement that in any gauge theory coupled to gravity, you can not get arbitrary mass or coupling but you are confined to have a bound of the following form (here I suppose the above U(1) gauge theory):

is the U(1) gauge charge, the electric or more generally speaking the abelian gauge coupling (hypercharge).

Why is this important? Well, the keyword in the mood these days is called: emergence. Gauge theories (and even GR) are expected to be emergent or derived from a more fundamental framework (string theory is such a framework, but also supergravity or supersymmetric theories). Then, the WGC takes a more general form. The smallness of the gauge couplings at low energies (IR, infrared) is caused (likely) by heavy particles in the UV (high energy, short distance, regime). This is sometimes referred as IR/UV “entanglement” but it is a sort of duality like others discovered since 1995, the second superstring revolution. Now, there is a conjecture, by Harlow, in the form of WGC:

“The WGC of any emergent gauge fields is mandatory to enforce factorizability of Hilbert space in quantum gravity (QG) with multiple asymptotic symmetries”.

Here,  let me highlight the complementarity between the UV-cutoff scale

and the IR-regulator expected from field theory. This is the origin of the above bound in mass-charge and its generalizations, that I am going to discuss a little bit.

Suppose you formulate (D+1) gravity and compactify some extra dimension on a circle. Then, you get the celebrated relationship

By the other hand, gauge theory on the circle provides a KK charge coupling

From these, and the hypothesis that the UV scale is less or equal to the Planck scale, i.e.,

, counting degrees of freedom you obtain something like this

In fact, a more precise bound would be

since our calculation involved a nasty trick of gauge KK into the gravity realm of the bulk. Even more surprisingly, in any dimension, loops and UV cut-offs allow us to generalized that into

and the scale of gravity fixes into

and where the sum extends on any dimension of gauge representations for the i-particle into the E-configuration after compactification or the cut-off regularization. Again,

, where k is the lattice spacing, and n is some large quantum number, such as

and therefore, the scale of quantum gravity is bound in the form

In fact. the requirement to avoid the Landau pole in U(1) also imply a similar bound, provided

You can also generalize all this for non abelian gauge theories in any dimension!!!!! For a SU(2) in D-dimensions, you obtain

You can easily evaluate for our 4D world to get

For larger groups, as SU(3), the formula is more complicated but after group theory and mathematics you can obtain

For a general non-abelian gauge group G, the two mail formulae for the WGC are the following

These equations and formulae have the following meaning in D-dimensions: they provide a bound betwen the mass of the lightest particles and the heaviest, and provide a relationship betwen the range of the group

, as a function of the range plus half of the roots of the groups. Note that for SU(N), you have

, and that you also get the asymptotic limit for “big numbers”(

as usual from compatification scenarios and other brane worlds or BSM theories. Indeed, for instance, in a KK scenario in SU(2)xU(1), you would get something like this:

, implies that the lightes mass can not be arbitrary and are related to the higher energy maximal mass in such a way that

What about string theory? It yields that string theory as a generalized KK theory also contains a genberalized form of the WGC as well! In the weak coupling limit, any stringer has derived in some moment something like this

for gauge theory in the background. Also, you probably know that

in 10d heterotic string, and

for gauge theory below the string scale up to numerical constants. Moreover, below strings,

, but at the string scale we would have

. For a p-dimensional torus compact manifold:

is the KK photon coupling to the compact

circle. Therefore, you can derive the following results:

Similarly, lightly different but analogous, in Type I strings you have

Note that the gauge coupling is the only difference with respect to the heterotic case. Then, you proceed and get

in Type I strings, and

. Comparing both cases, you will note surely that

What about D-branes? Well, they are also included. D-branes are “heavy” particles in general. Take IIA 10d superstring theory. And take that

For a D-brane, you get that

there is no change below

, and thus, the relationship

Conclusion: any reasonable form of gauge-gravity unification implies a WGC and a limit of the number or masses of the lightest species as function of the heaviest ones! GUT, string theory or any other BSM seems to be bound through quantum gravity!!!!!! Equivalently, it seems that quantum gravity limits the number of particle species and degrees of freedom (or masses) of particle through the Planck mass, the number of dimensions and the gauge couplings. Yet, in other form, gravity is weak because unification with gauge theories limits the mass to charge ration between particles.

Remark: the WGC has surely implications in black hole physics. Extremal black holes are likely unstable (or non-existent), and they decay into charged particles. It could have experimental signatures…

Well, more is to come soon. Indeed, I have some news to give you in brief (provided my health doesn’t collapse again), and big news are happening for this blog. Probably a change of format, and well, maybe I will end posting with this style at about log#300. Life is changing and moving, and other change, like the one I did when I acquired this domain years ago are to begin when I prepare the infrastructure I am eager to own. By the way, you can follow me at my instagram @riemannium.