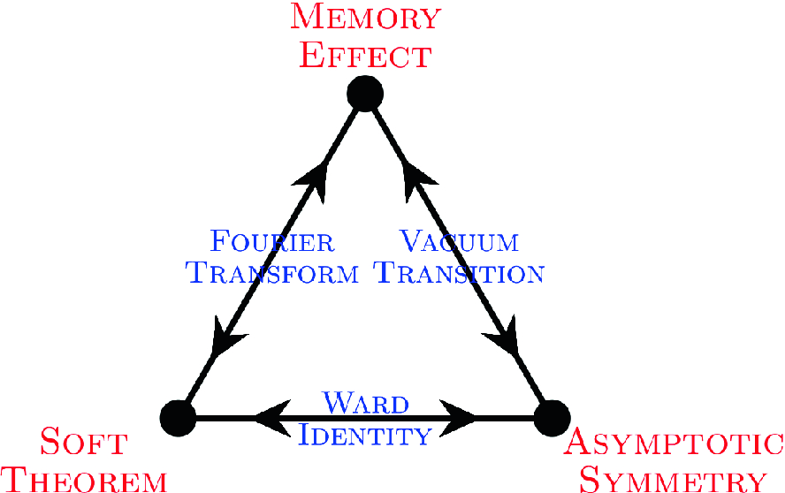 Surprise! Twice in a day!

Yes, I have much to tell yet, alive…Beyond the holographic principle, and things like gravity is Yang-Mills squared or that open strings squared are closed strings, we have had other important development in the theory of black holes and theoretical physics these years, even when Hawking passed away… Let me say I am not going to surprise too much, since many of the readers I am sure they know what I am going to say after reading the title of this entry.

1985. Braginsky and Thorne write a paper on gravitational wave bursts with memory. They conjectured it could arise from some collisions of stars and black holes. 1965=1985. What the hell is going on here?

1985. How gravity and other forces act on large scales is temporally abandoned. Lacking of experimental tests. You know.

History track details: in 1962. Bondi, Van der Burg, Mertzner and Sachs (the latter independently), realized that DIFFERENT observers at constant speed would disagree on the limit

. Wait, wait,…How? Yes, you are reading it well. Different observers can observe different SR limits at constant speed when you go far away from the source. Therefore, the limit of flat spacetime from curved spacetime is not straightforward at all! The usual mantra from textbooks that you get special relativity locally from general relativity is subtle. GR textbooks say that GR reduces to SR in the weak field approximation, when you go far away from the source and locally your spacetime is “flat”. However, the floppy spacetime continuum makes this statement vague. Indeed, it is not accurate enough. Spacetime continuum is indeed a fluid-like or crystal and rigid thing. We would naively expect that what happens in our solar system is independent of the rest of the galaxy or the local group! Gravity diminishes at large distances, and planets or stars, therefore, are independent one to another and from distant enough objects! Well, it seems this is an oversimplification. Compère and collaborators, focusing on the crystal analogy, effectively “prove” that spacetime itself acts and looks like the same thing when shifted from one position to another, but…Studying Bondi et al. previous works, it shows that the limit “far far away”

do NOT spoils gravity and the gravitational force. Neither you get SR but an infinite number of extra dimensional symmetries and degrees of freedom appear! Spacetime remains floppy even at very large distances! It seems you can not spoil gravity completely. Now, one could protest…What happens to the equivalence principle here? That is quite a question. Since, even when “no gravity”, there is “gravity” left behind, a residual gravitational force is out there even when you can not see it or feel it. This residue remains and it is spooky. It has terrible consequences (please, don’t tell astrologists or futurologists about this, …PLEEEEASEE). Distant planets and stars, distant galaxies are not completely independently of one another after all. The Force is there yet. Furthermore, GR is NOT the same as SR even at long distances from the source (the difference would be unnoticed by graduate studentes, I presume, unless they read about it, or they were informed on this point). What is this influence? What is left unspoiled when far enough from the source? The magic word that gives name to this blog entry: supertranslations (please, don’t confuse them with supertraslations from supergroup and supersymmetry).

What are supertranslations? Well, something easy to say, not easy to live with without care. Supertranslations are certain coordinate transformations given by ANGLE-dependent translations relating points at “infinity” far from a gravitating body. In other words, they are infinite dimensional symmetry transformations relating points at different angles from very far away sources. They form a group called BMS group. The mathematical code of BMS group implies that empty spacetime have a large complexity. From this viewpoint, for empty spacetime there are infinite ways to be empty. Of course, it seems nonsense but it has surprising consequences. That vacuum and vacuum spacetime have such vast complexity…Well, it is amazing. Vacuum is a complex thing after all. Every big question in the 21st century in theoretical physics is related to vacuum! The BMS group has another surprise, beyond supertranslations, you also have superrotations. Superrotations are generalized rotations (even rotational boosts get generalized) that takes the form of conformal complex transformations, they are related to the conformal rescaling of the metric, and, it turns (and I am sure this turns already stringers horny), that the superrotation charges form a Viraroso algebra or group. Supertranslations charges are supermomenta, and these are conserved due to the Noether theorem. Superrotations charges are much more subtle, they are superangular momenta. The BMS groups in 3 dimensions or higher have supertranslations and superrotations, but superrotations are bad beasts. It shows that they could you allow to create cosmic strings at the far extreme points of the Universe.

Time machine again. It is the 1930s of the 20th century. Felix Bloch and Nordsieck calculated that if you collide two soft photons at zero energy, the probability of the given outcome is independent of the number of the particles you produce and extra details. The same situation, it can be showed to happen if you collide two soft gravitons. In general, soft photons or gravitons are added due to supertranslation asymptotic symmetries! Apparently empty spacetimes should gravitate as consequence of these residual asymptotic symmetries of gravitational forces. Add soft particles to the vacuum does not change the physics, but it does contribute to global angular momentum and momentum. This vacuum degeneracy is striking. But it is not uncommon. Asymptotic symmetries have been discovered also in gauge theories. There, they have a much more big name: they are called “large gauge transformations”. In other words, large gauge transformations are asymptotic symmetries in gauge theories that don’t allow you to spoil the field completely. Vacuum is not “unitque”, it is defined modulo asymptotic symmetrics/large gauge transformations. Moreover, you can get even get asymptotic symmetries from other particles too, not only photons or gravitons. Strominger, in fact, has provided a new interpretation of supertranslations. Supertranslations ADD (soft) particles to (vacuum) spacetime. Are BMS charges real or a mathematical artifact? What are the effect of the BMS charges on the equivalence principle? Well, these questions are hard to answer, but there is another part of the whole story coming.

Circa 1970s. Zel’dovich y Polnarev discover the memory effect. Gravitational waves cause oscillations of masses and particles BUT also cause other stunning effect. Gravitational waves produce a permanent shift in position or displacement of any object that is crossed by them! They also cause a permanent time shift. That means, for instance, that mirrors of LIGO and other gravitational wave experiments do NOT return to the original position. This is a very tiny effect though. This effect is very similar to the dislocation effect on a crystal after a phonon disturbaces the atoms in the lattice. The gravitational wave here acts as the dislocation. Compère has remarked this effect. Passage of gravitational waves is like dislocation in crystals, and it produces a permanent displacement we could measure in the future with gravitational astronomy. If you want to look how memory effects do arise in ohter forces, see e.g., http.//arxiv.org/1805.12224 and references therein. Strominger, indeed, has envisioned a matrix solution to the BHIP (black hole information paradox) using the asymptotic group symmetry. It was joined by Hawking months before his death. However, there are puzzles with respect to this solution unsolved, and their proposal is yet not a convincing solution. The good thing is that we are approaching a new symmetry principle, beyond the diffeomorphism or Poincaré symmetry group. A new symmetry and relativity principle is necessary in order to manage a true unification of gravity and quantum mechanics. The dislocation effect of gravitational or gauge theory memories is that two observers, shift a constant distance after the gravitational (or the interaction wave) passes. Memory effects for electromagnetic and gauge forces are universal. Perry, Hawking and Strominger thought a solution of BHIP with these symmetries. Yet, how spacetime emerges from more fundamental symmetries like these BMS is not an easy task. Even worst, the hair or the extra charges introduced by supertranslations and superrotations could be not enough for saving unitarity!

Have you been supertranslated and superrotated? Probably yes, any gravitational wave crossing through your body permanently shifts your atoms and particles! Fortunately, it is a tiny effect. Hopefully, we will measure it in future gravitational wave telescopes! Disturbingly, any gauge force does the same and it can not be spoiled away modulo soft particles at your position and time. Even worst, OR NOT, any far away source of the Universe is linked to you via supertranslations and superrotations. Don’t tell any pseudoscientist abou it. Instead of blowing up their minds, they will try to publish and get money with that information. Mmm…Should I make money with supertranslations and superrotations? Just joking, see you in another quantum blog post!!!!!!

P.S.: Motto is that we were lied! Potential at infinity does NOT spoil the force (potential) to zero. Zero-point measurements are likely impossible in quantum fluctuating theories since there is not such a thing like a quantum rest. The quantum aether is “dead” as static thing. Is the cosmological constant a residual effect from the quantum unified field theory?