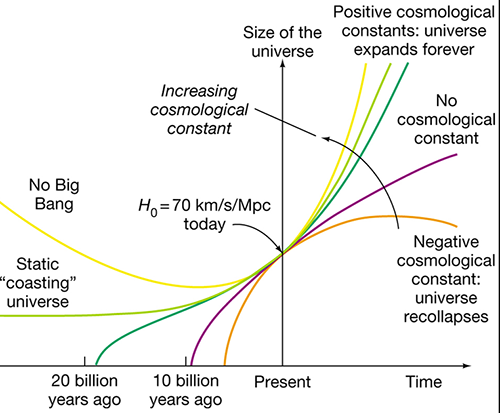 What is dark energy? Where does it come from? Is it constant? Is it a quantum field? Is it vacuum energy? Nobody knows what is the 70% of the Universe!

In the beginning of Physics as Science, Aristotle himself introduced the idea of energy (from the Greek

., meaning capacity of update or act on something). Stones fall down to Earth with the goal of finding their natural place. The capacity to be placed in the natural place requires something called energy. Energy was also implied to a virtuous ending. Today, the physicist definition uses the capability to do some “work”, i.e., the ability to displace something with a force changing the state of the object requires energy. Energy is also a quantity invariant under time translations (first Noether theorem!). Energy spent to create motion is the the same the body acquires to move. That is the origin of the name “vis viva”. Energy is something required to move something.

There are 4 great equations for energy, related to the biggest revolutions in physics:

. Kinetic energy or true vis viva, in the sense it was the first to be introduced (up to some numerical constant).

. Thermal energy as the result of atomic-molecular hypothesis. The great idea of Boltzmann.

. Quantum of energy, Planck desperatation made him invent the quanta of radiation to solve the black body problem.

There is a gravitational potential energy formula as well,

and a electric potential energy

but the above 4 are the most conceptual equations for energy. It was Descartes the first one who discovered  that the followin quantity (or a multiple of it) was constant from Galileo works:

and that it was necessary in order to make up a clock! A gravitational clock is a device that requires some vis viva

, you get an energy

for the clock, and good clocks have fast ticks, so

. The clock gravitational frequency can be written as

, and quantization of the action

.There is a quantum length, critical

The critical (optimal) clock in QM is the one with

Deep question: can we simulate with classical gravity a quantum clock? How can we understand gravity from a quantum entangled critical system? Hint is that

Leibniz formalized the ideas of Descartes with his calculus. Einstein renewed the idea of vis viva and energy with the aid of his special relativity. Time is slower when you move faster. General relativity enhances this fact, showing that the time passes slower closer of a massive body.

has indeed a classical meaning as “useful energy” or “binding energy” in nuclear or particle physics. Total energy is useful plus unuseful energy. Related to unuseful energy is the idea of entropy. Entropy, from the Greek meaning “transformation”, is a magnitude equal to

is the number of possible configurations or microstates with the given energy.. The Max-Ent principle says the total entropy of the universe tends to be maximized. In the end, at lower energies, every possible configuration has the same probability. Then, equipartition of energy holds, as thermodynamics and statistical physics taught us.

Now, dark energy as vis tenebris. Inventing his celebrated General theory of Relativity, a locally special relativistic theory of gravitation, Einstein realized that his equations predicted the Universe was expanding (contracting). That was obviously nonsense, the Universe was static (before Hubble discovery!). Then, he used a freedom his equations had, and introduced a term, called the cosmological term (or cosmic repulsion) that balanced gravity and made the Universe static. After Hubble’s discovery of the expanding Universe of galaxies, Einstein thought he had committed the biggest epic fail of his life…I wonder what he would have thought if alive when in 1998 we discovered the expansion is accelerating (positively) by something that mimics his cosmological constant at this time. The name dark energy is due to the fact we are not, in principle, be forced to believe the cosmological constant is indeed constant, since it could be varying very slowly on cosmological times, and it could be some king of field. Anyway, dark energy (vis tenebris) is permeating the space and it is responsible to the increasing speed of the expansion. Every time the space expands, more vis tenebris is added. If it is the cosmological constant, its addition is such that the density energy is constant in all over the space! Vis tenebris energy density is (take a universe as a sphere for simplicity)

and then the vacuum energy in a sphere of volume

, you can compute the dark energy in that volume. As the scale factor increases, the density remains constant so the cosmic energy grows up by

Indeed, dark energy (vis tenebris) is the darkly main ingredient of the current Universe (about 2/3 or 3/4 as most). We are dominated by a dark energy “force”. What is it? That is the challenge and the puzzle…