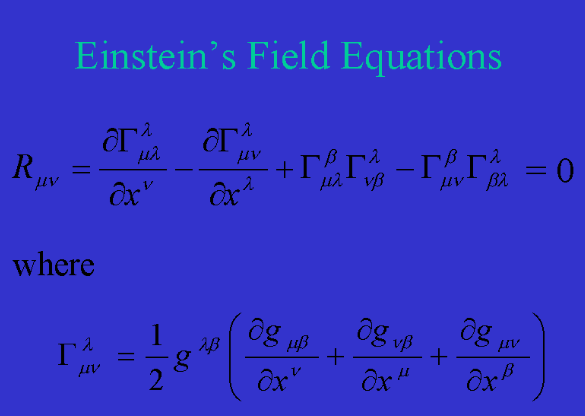 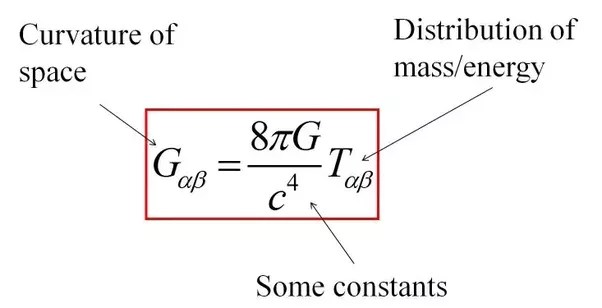 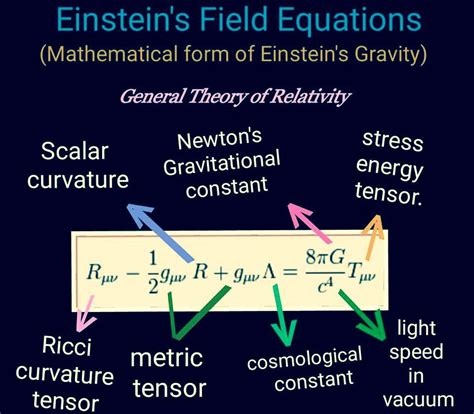 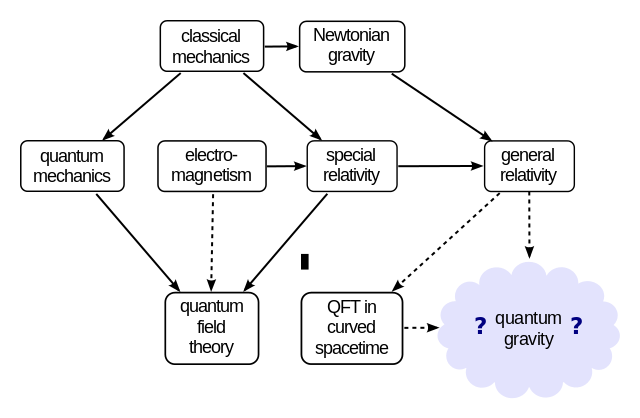 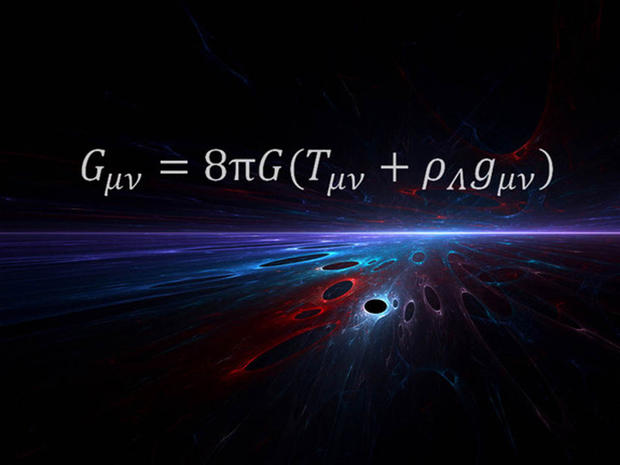 Newtonian gravity is not coherent with special relativity. Einstein was well aware about it and he had to invent General Relativity (GR). Armed with the equivalence principle, a mystery since ancient times of Galileo, the equivalence between inertial and gravitational mass guided him towards a better theory of gravity. He could envision properties of space-time like geometric features. He deduced that gravity was caused by space-time curvature, and idea that was already anticipated in the XIX century by B. Riemann in this habilitation thesis and by W. K. Clifford with his geometric algebra and calculus. Finally, and rivaling D. Hilbert, he arrived to the field equations (already seen in this blog):

is the Einstein tensor,

is the universal constant of gravity, and

is the cosmological constant.

is the metric tensor (acting as gravitational potential in GR!), and the Ricci tensor, the Einstein tensor and the curvature scalar depend upon the metric and its derivatives up to second order in the derivatives.

is the momentum-stress-energy tensor. Space-time (curvature!) says matter and energy how to move, matter-energy tells space-time how to curve!
GR has a large number of tested phenomena! A list (non-exhaustive):

. Tidal forces are consequence of the space-time curvature, as source of gravity.

is the Schwarzschild radius. A simpler way to see the metric effect (gravitational potential) is using the expression:

is the time of the highest clock, at height

, with respect to the deep observer measuring

. The proof of this result can be done using a simple argument. A clock is some type of oscillator with frequency

. In two different points, that oscillator it will have energy

As frequency and period are inversely proportional, it gives

, we recover the first formula

if we suppose that the potential is

. In the case the height is not negligible with respect to the radius, the GR correction can be generalized to

This formula can be comparede to the SR correction due to motion:

Exercise: make the figures for

. The net effect is that the orbital clock is faster than the deeper one by a quantity

. We can see what clock is the dom. It is the GR clock. Estimate how many times is more powerful the GR than the SR effect. A more careful deduction, having into account the ellipticity and the orbital parameters, can be derived too:

are the universal gravitation constant, the Earth mass, the major semiaxis, the eccentricity, the speed of light, and eccentric anomaly and the average anomaly.

Mercury precession and general orbital objects in GR. Before Einstein, even LeVerrier speculated about Vulcan, a further inner planet of the Solar System. Vulcan does not exist: it is only a non-trivial GR effect:

Gravitational lensing (checked with success in the A. Eddington expedition in 1919):

. Every body loses energy with gravitational radiation. It was anticipated by the binary pulsar observations in the 20th century. LIGO detected the first GW in 2016. Without sources, the wave equation for gravitational waves is

Gravitomagnetic effect (tested by Gravity Probe B), or Lense-Thirring. The first formula reads:

and the second formula is

Existence of black holes, objects so dense that light is trapped. Anticipated idea as dark stars by other scientists, a more precise definition of black holes is like vacuum solutions to the EFE (Einstein Field Equations)
\item Vacuum energy density, VIA

, AND it yields a density energy even for vacuum

Cosmic expansion, Big Bang theory, as large scale consequences of EFE. A simplification can be done using the cosmological principle: the Universe is homogeneous and isotropic at very large scales. It simplifies solutions to EFE and a special class of metrics, the so called Friedmann-Robertson-Walker metric, allow us to study the expanding universe and its history.

GR also gives the possibility of time machines, wormholes, and TARDIS-like space-times. Other solutions: regular black holes, cosmic strings, cosmic deffects, black p-branes,…Recently, it was realized that the reduction of GR to SR in weak fields is non-trivial due to asymptotic symmetries. The BMS group provides the full set of symmetries in GR, plus a new set of symmetries. Thus, supertraslations, superrotations and superboots have generalized the BMS group in the extended BMS group, a sort of conformal or superconformal symmetry. Gravitational memory effects have also been studied recently. GR is a simple gravitational theory, the simplest of a bigger set of theories.

Extensions of GR can be studied, both as alternative to GR or having GR as approximation: multimetric theories, higher derivative extensions (Finsler geometrey, Lanczos-Lovelock, torsion theories like Cartan’s, non-metric theories, tensor-scalar theories, teleparallelism,…) and many others.

At quantum level, gravitation is not completely understood. The best candidate for TOE and GR extension is string theory, a.k.a. as superstring theory or M-theory. Also supergravity theory remains as option. Other alternative theories are Loop Quantum Gravity, twistor theory and extended relativities. GR involves the existence of space-time singularities where usual physical laws do not apply. No one knows how to treat the issue of the beginning of time and space-time.

P.S.: Off-topic, there are only 3 posts left before I will leave this type of blogging. The post 250 will be special and I will try to do it with my new “face” and interface. WordPress has been doing badly and delaying my posting these weeks (beyond other stuff). I can not loose time checking if LaTeX is encoded here OK. I will change that. I am going to post pure pdf blog posts since the number 250 and so on. I will post in pure pdf format from the 250th and beyond. Maybe I will move the site. I am not sure about that, but anyway I think I will keep this site as the previous (free) since it will be reconverted into a shop of my materials too. Consider make a donation to support my writing job here. Also, you will be able to buy my blog posts edited with LaTeX soon. Let me know if you would buy them all or only a few of them. It would help me to decide how to move forward. Furthermore, I will assist sci-fi and movie/TV-series/plot makes with Scientific Consultancy. Even, I could suggest you what kind of equations or theories could support your stories (if any!).